Crystallization-driven processes play a vital role in preparing 2D nanostructures which makes structures with high symmetry hard to access. Here the authors present a non-crystallization approach which is based on π–π interactions of a copolymer for the fabrication of 2D symmetric structures with good dimensional control.
Feng He
Professor, Southern University of Science and Technology
Follow
Like Be the first to like this
0

The paper in Nature Communications is here: http://go.nature.com/2FCwf2I

Recently, 2-D nanostructures such as hexagonal, rectangular and rhombic platelets was prepared by crystallization-driven self-assembly (CDSA) processes of block copolymers (BCPs) based on poly(ferrocenyldimethylsilane) (PFS) or poly(L-lactide) (PLLA). However, these approach, which is limited by the crystal unit cell symmetry, is relatively hard to access 2-D assemblies with high symmetry. When we got involved in the supramolecular self-assembly field, we aimed at obtained uniform 2-D nanostructures with non-crystallization derived approaches. The poly(2,5-di(2’-ethylhexyloxy)-1,4-phenylenevinylene) (PPV) blocks possess long conjugated backbones, which make themselves to achieve tight intermolecular packing with intense sheet-forming assembling tendency through intermolecular π-π interactions. From the previous reports, we also found some wide 1-D assemblies were obtained from the PPV-based BCPs, which indicated that the π-π interactions of PPV blocks might replace the crystallization to drive the self-assembly process to form 2-D nanostructures.

We designed and synthesized a series of supramolecular block copolymers composed of a π-conjugated PPV core, and a corona block of poly(2-vinylpyridine) (P2VP), which could form self-assembly supramolecular systems in selective solvent by π-π interactions. Fortunately for us, uniform regular 2-D square micelles of PPV12-b-P2VPn were yielded from the resulting colloidally stable solutions by a simple dissolving-cooling-aging approach. The 2-D supramolecular structures formed by those block copolymers is very interesting, especially its regular and homogeneous square morphologies from alcohol solvents. By changing the ratio of the core/corona, the scale of the square micelles could be tuned from 200 nm to micrometers, which could also be adjusted by varying the solution concentrations in some block copolymers. Then we also examined the crystallinity of the 2-D square micelles by selected area electron diffraction (SAED) and high resolution TEM (HRTEM). Agreeing on our expectations, the platelet 2-D square micelles were really non-crystalline, and the driven force of π-π interactions could be confirmed. This result is quite different from those reported 2-D structures of BCPs obtained by CDSA process, and the 2-D square micelles developed here were really significant findings in polymer supramolecular research fields.

From our experiments, it revealed that the square micelles initially form 1-D structures in selective solvent, and then grow into 2-D architectures, and the growth is related to temperature and aging time. The formation of the square shapes is likely induced by the herringbone molecular arrangement, which is caused by the branched alkyl chains attached to the conjugated PPV cores. This strategy is practical and expected to be easily applicable to other conjugated block based copolymer systems. Since PPV is a classic type of materials with fascinating optical and electronic properties, we believe those square micelles could have potentials in the fields of biosensors, catalysis, template building and optoelectronics on the nanoscale.

Feng He
Professor, Southern University of Science and Technology
Follow 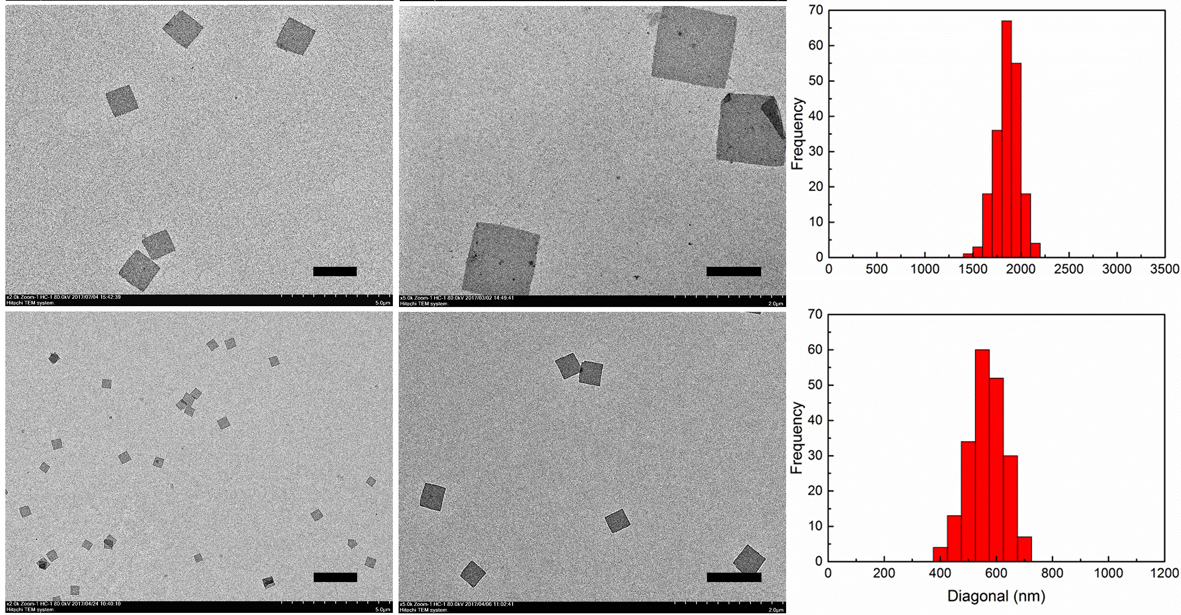 Crystallization-driven processes play a vital role in preparing 2D nanostructures which makes structures with high symmetry hard to access. Here the authors present a non-crystallization approach which is based on π–π interactions of a copolymer for the fabrication of 2D symmetric structures with good dimensional control.