Our paper in Nature Chemistry is here.

There are many anomalous characteristics of liquid water that have attracted scientists’ attention. For example, experiments found that the conductivity of protons, carried by the hydronium (H3O+) ions in liquid water at ambient conditions, is anomalously fast compared to sodium cations like K+. Experiments also show that the negative-charge carrier hydroxide (OH-) diffuses only at about half-time speed as compared to hydronium, which remains a mystery for a long time. As caused by thermal fluctuations in liquid water, the process of autoionization breaks water molecules into hydronium and hydroxide ions and results in the pH=7 for water at room temperature.

The first proposed proton transfer mechanism dates back over 200 years ago. In Paris at 1805, Theodor Grotthuss, a twenty-years-old youth from the Baltic region who did not receive much systematic scientific education, used the most advanced chemical dc power cell he could get at that time and conducted a series of experiments on electrolysis process in aqueous solutions. From these rudimentary experiments, Grotthuss gave the first interpretation of the current transport in solutions, which explains the proton transfer process in liquid water as “structural diffusion”. In this so-called “Grotthuss mechanism”, with a sequence of proton hoppings along a chain of hydrogen-bonded water molecules, the extra proton for hydronium, or the “proton hole” for hydroxide, originally at one end of the chain could be passed to the other end, while the water chain does not move much.

With the development of computational models for the dynamics of molecules in the last 20 years, the field of computational chemistry sees a resurgence of interests on the topic of proton transfer. The inter- and intra-molecular structural changes during proton transfer, at the timescale of femtoseconds, are made available through the computational modeling of liquid water with ions. Researchers have shown that with modifications and refinements, the Grotthuss mechanism largely holds for proton transfers via the solvated hydronium. What’s even more interesting, computational simulations discovered that a burst of multiple proton transfer events may happen in a very short time along a hydrogen-bonded wire of water molecules, which also contributes to the high diffusivity of hydronium.

Although hydroxide is being described as carrying a “proton hole” as compared to hydronium, the diffusion mechanism of hydroxide is now thought to be asymmetrical to hydronium and does not follow the Grotthuss mechanism. It has long been discovered in experiments that hydroxide diffuses slower than hydronium in water, but the proton transfer mechanism for hydroxide was not fully illuminated, due to the limitation of previous computational methods incapable of describing the delicate hydrogen bond network. In our recent article “Hydroxide diffuses slower than hydronium in water because its solvated structure inhibits correlated proton transfer” published in Nature Chemistry, we explain the structural origin for the low diffusivity of hydroxide based on advanced quantum-mechanics-based models. As shown in Fig. 1, the hydroxide ion is constantly “trapped” in a local stable configuration where it accepts four or more hydrogen bonds to form the so-called “hyper-coordination structure” (the title picture). In this stable configuration, the correlated proton transfers along a hydrogen bond chain is hard to occur, unless the local solvation structure resumes back to an active state, where the hydroxide ion accepts three hydrogen bonds and forms the “three-coordination” structure, through the spontaneous fluctuation of hydrogen bonds nearby. The existence of the local stable configuration around hydroxide explains the long dispute that why hydroxide diffuses slower than hydronium in liquid water. 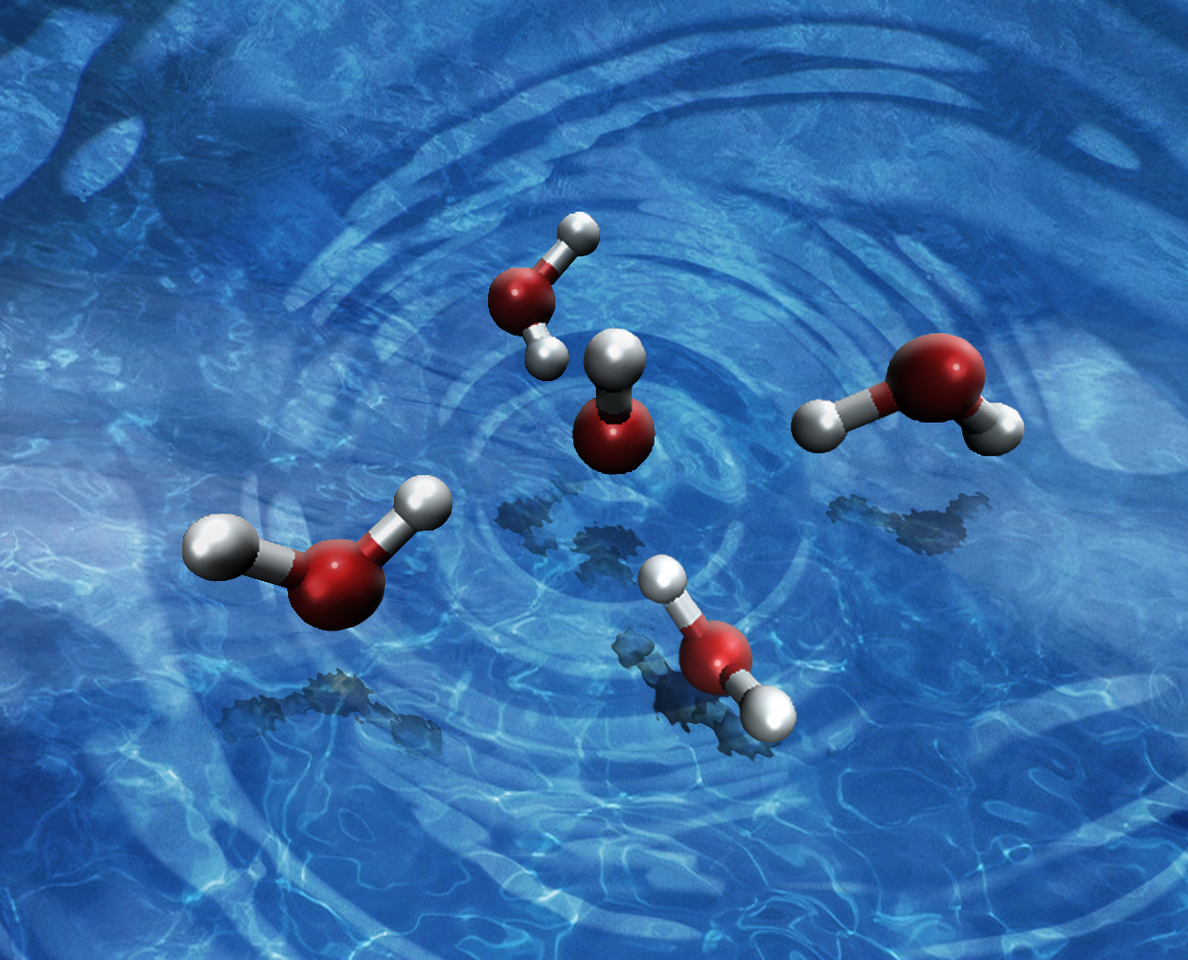