The paper in Nature Communications is here: https://go.nature.com/2G4uGOH

It has been said “to make a new drug, it is sometimes good to start with an old one.”  In the last few years, we have returned to an old stalwart of medicinal chemistry, the steroid, as the basis for a number of chemical biology projects. In one, collaborating with Emily Scott’s lab at the University of Michigan, Charlie Fehl and Caleb Vogt added a nitrogen atom to a steroid backbone to create a new ring system. Recognizing an opportunity to expand this concept, we decided to make a set of ring-expanded nitrogenous steroids, only to quickly focus on one problem on which the success of the entire enterprise would depend:

How to put the damn nitrogen group exactly where we wanted it?

To oversimplify 100 years of ring expansion chemistry, selective ring expansions require a group next to the site of reaction, such as C-17 (D ring ketone) in the steroid below. That gives you one of two possible products – but the alternative product is either non-accessible or requires lengthy workarounds. On the other hand, if the two groups next to the ketone have the same substitution, like the C-3 ketone in ring A, then any selectivity one sees is a result of luck rather than design.

Years ago, Marlys Hammond in our laboratory conceived an elegant solution to this problem that was, alas, ahead of its time.  A different way of looking at the problem of obtaining regioselectivity in a chiral ketone is to recognize that the local environment of the carbonyl group looks a lot like that in a simpler achiral ketone, in which the two groups attached to the ketone would be enantiotopic (that is, they would reflect through a mirror perpendicular to the carbonyl group). So, if one has chemistry to differentiate enantiotopic carbonyls, simply applying it to the more complicated place should fill the bill. Basically, the remaining substituents just come along for the ride.

Marlys was able to demonstrate this using a multistep route, but we lacked sufficiently powerful chemistry to make it practical for widespread use. The present paper describes Manwika Charaschanya’s realization of the idea using a set of chiral azido alcohols that are both able to control the regiochemical outcome of the reaction but also to provide numerous analogs simply and efficiently. This approach proved sufficiently powerful that we were able to generate an unusually (ring) expansive substrate table that included fully controlled access to all four of the ketones, including the ability to overcome the natural tendency of the substituted D ring to give a single isomer. The four structure types are exemplified in red below (with apologies to R. Magritte); over a hundred examples were made to fully establish this chemistry (and to provide us with a “chemothèque” of nitrogenous steroids as well).

We think the concept of “local” regiochemical control using a suitable chiral tool should prove especially useful for the late-stage functionalization of chiral molecules (such as most natural products).

Manwika and I dedicate this work to the memory of Marlys Hammond. 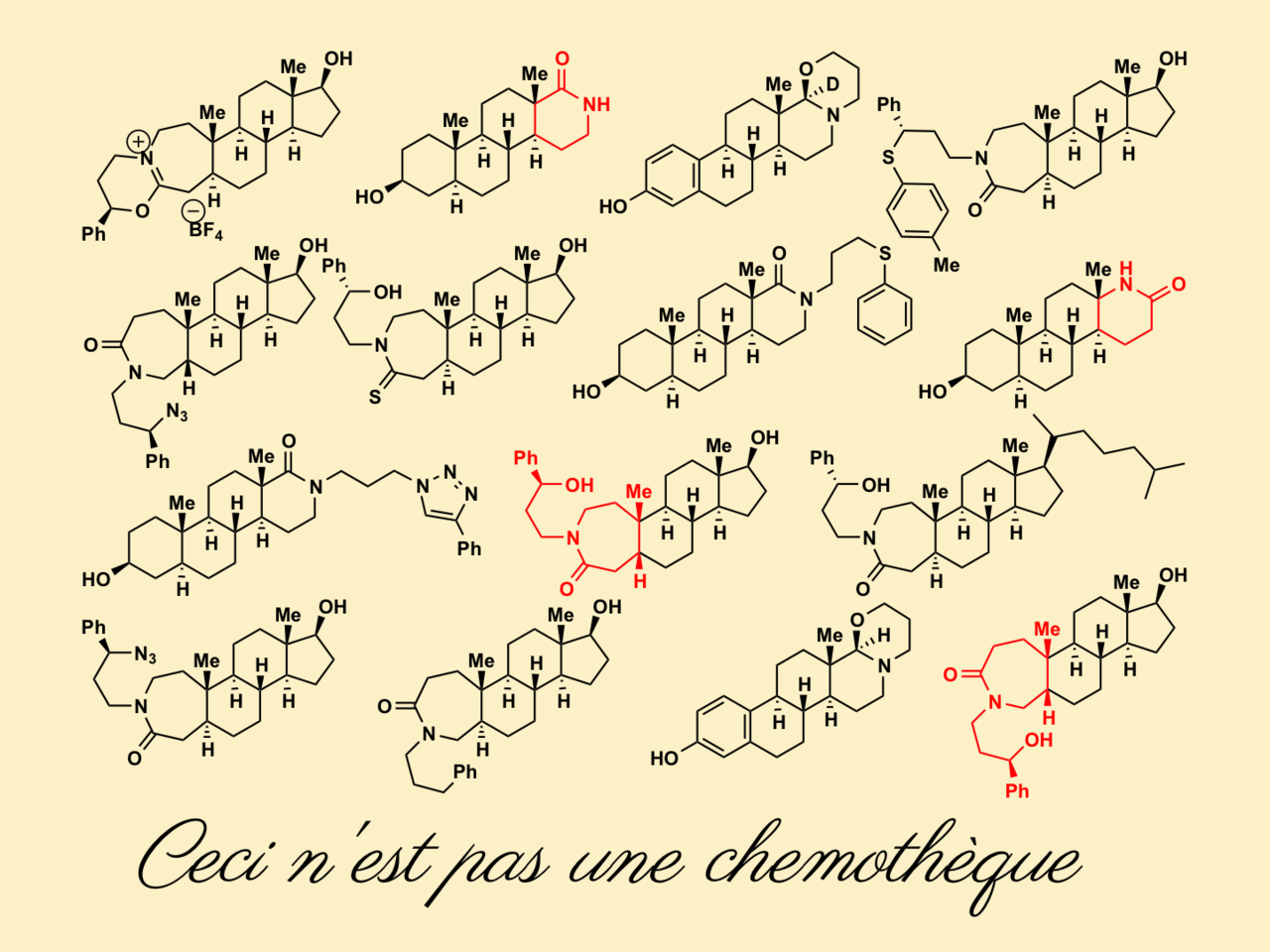