The nanoscale structure and chemical composition of surface adlayers are elucidated through spectrally resolved super-resolution microscopy.
Limin Xiang
PostDoc, University of California, Berkeley
Follow
Like Be the first to like this
0

Here is our paper in Nature Communications: https://go.nature.com/2vcxmo8

When I was a high-school student, I was told that most of haloalkane/haloalkene are miscible with each other. When you mix two of them together in a beaker, you will get a transparent solution with no phase separation. However, things could change under low dimension, for example, on a glass surface.
The whole story started with a mistake when I was preparing a graphene sample on a glass surface. I accidentally used chloroform to dissolve the PMMA (poly-methyl methacrylate) on top of graphene, instead of using acetone as most other people do. Surprisingly we found many ring-shaped structures interchanging with each other on the bare glass surface area. We thus realized that we found a good way to image the extremely thin and fragile surface adlayers.

When exposed to a liquid or vapor, a solid surface picks up molecularly thin adlayers that often dominate its surface behavior. Such fragile adlayers are difficult to be characterized via conventional methods. Super-resolution (fluorescence) microscopy (SRM) provides a noninvasive, optical mean to achieve nanoscale spatial resolution. On the other aspect, solvatochromic dyes such as Nile Red can exhibit different spectra in solvents with different polarity. Combining the appropriate dye and optical method together, we thus can provide rich spatial and polarity information for the adlayers.
We then dig into the library of organic solvent and identified eight representative organic solvents with different polarity on the Dimroth–Reichardt ET scale. Through looking at the spectra and morphology of these adlayers with Nile Red, we not only found that the spectra indeed redshift as polarity increases, but also the evolution of the dimension: from 0D nanodroplets to 1D nanoline and then 2D microsheet.

As the last step, one question came up on the top of our heads. Can we control the spectra and morphology of the adlayers by simply mixing two solvents with different polarity? We choose trichloroethylene (TCE) and chloroform, two seemly miscible solvents on the bulk scale. We expect that a uniform adlayer with both spectra and morphology between the two pure solvents would be seen. However, nature does not always behave as what you think. Glass surface induces a spontaneous demixing of the two solvents, causing them to separate into different domains that have dramatically different components and polarity. Varying the ratio of the two solvents will give more diverse morphology and spectra, and these were all attributed to the different percentages of chloroform/TCE within each domain.

We believe our work represents an example of how to apply super-resolution technique into the non-biological field, and we hope that it can serve as a new way to explore other soft-matter systems inaccessible to current methods.

Finally, one more suggestion from the authors: Avoid using tetrahydrothiophene in your lab! 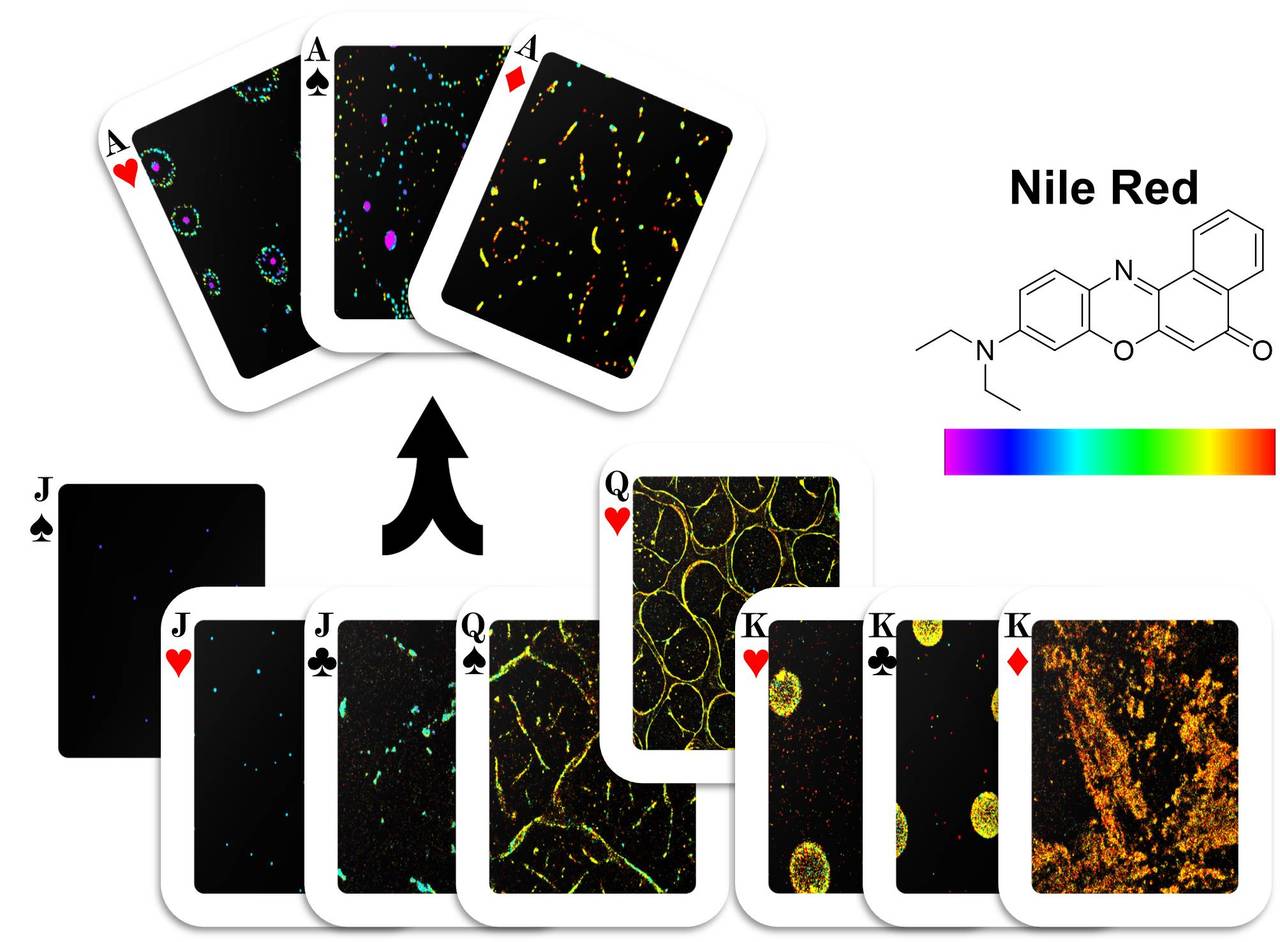 The nanoscale structure and chemical composition of surface adlayers are elucidated through spectrally resolved super-resolution microscopy.