Here is our paper in Nature Communications: https://go.nature.com/2KqXlvS

Since discovering the first efficient method for the synthesis of highly fluorescent tetraaryl-pyrrolopyrroles in 2012 we realized the potential it may offer. While the analogous, and rigorously studied, thieno[3,2-b]thiophene has been known for a long time, pyrrolo[3,2-b]pyrroles had been a scientific curiosity until our discovery. The replacement of sulfur atoms with nitrogen atoms not only changes the electronic nature, but also offers for the first time the possibility to place six benzene moieties around the heterocyclic core which could be subsequently 'sewn' together to form an oval-shaped nitrogen-embedded buckybowl. The synthesis of such a molecule became the dream of one of my most talented PhD-students – Maciej Krzeszewski. He spent over 1.5 years on this project in the lab and we both spent countless hours drawing ever more complex synthetic strategies supposedly leading to this ‘Holy Grail’. All of them failed, usually on the last step which involved the formation of two seven-membered rings. Gratifyingly, numerous other partially fused π-expanded pyrrolopyrroles were prepared on the journey towards this goal. The most interesting amongst these were ‘double-headed butterflies’ –double helical molecules possessing planar chirality. Even though judging from crystallographic structures, the remaining un-fused carbon atoms were in close proximity to one another, a bond could not be formed between them to create the fully fused bowl.

Desperate to fulfill our dream, on September 16th 2016 I contacted Prof. Roman Fasel (Empa, Dübendorf, Switzerland) who is a world leader in the surface-assisted synthesis of graphene nanoribbons and scanning tunneling microscopy. He enthusiastically joined the project, but the first submitted sample could not be transformed into the final product even during heating on a gold surface at temperatures above 300 °C. Only one seven-membered ring could be closed. After this discouraging result, I was about to give up when Maciej Krzeszewski proposed yet another potential strategy. He suggested the preparation of a new partially fused pyrrolopyrrole with the two seven-membered rings already closed. After many attempts he was able to achieve this goal via a combination of direct coupling and dehydrogenation. Still the final two six-membered rings could not be closed by classical intramolecular oxidative aromatic coupling reactions. We sent this new compound to Roman Fasel in Switzerland and voilà the double ring-closure proceeded on a gold surface at 320 °C yielding the desired product. Initially we were attracted to the intrinsic beauty of this molecule, its symmetry, and inverse Stone-Thrower-Wales defect hitherto never observed in a discrete molecule. As a bonus we discovered an unprecedented case of isolated surface-adsorbed buckybowls with a preferential bowl-opening-down conformation.

We have proven that this oval-shaped nitrogen-embedded buckybowl exists and that it can be synthesized, yet, many challenges remain. One such challenge is the synthesis of at least milligram quantities of the new heterocycle and studying its photophysical properties.

In the broader context, this work shows the potential of on-surface synthesis for the formation of unprecedented aza-analogs of graphene and atomically-precise incorporation of challenging non-hexagonal ring topologies as a route to tailor the electronic and chemical properties of graphenic structures. 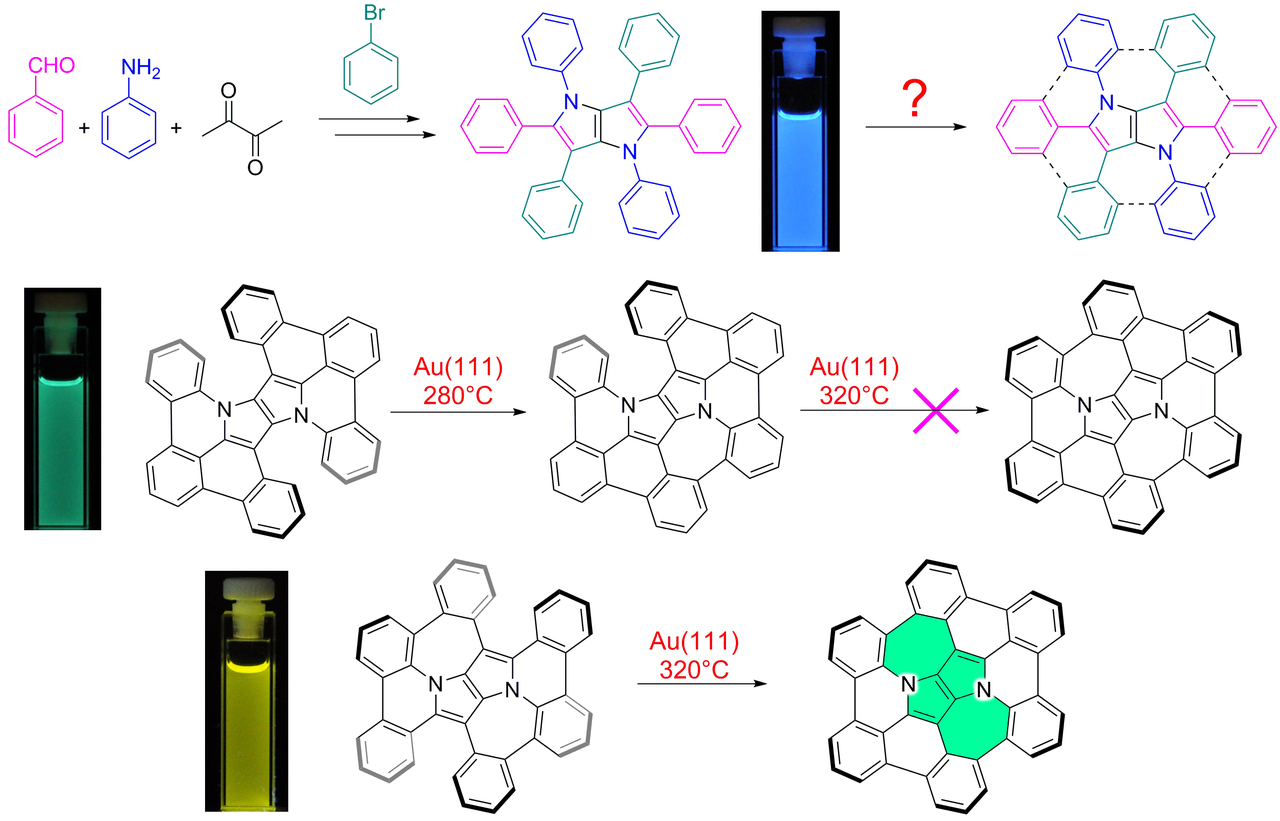