The paper in Communications Chemistry is here: https://go.nature.com/2wlzRoN

A recent paradigm-shifting concept, links between the structural features associated with amyloidogenic neuronal diseases and inborn error of metabolism (IEM) disorders, allowed us to explore the potential use of polyphenolic compounds, naturally found in green tea and red wine, as a potential additional innovative treatment for IEM disorders patients.

Going back, for over a decade, an increasing number of human maladies, including Alzheimer’s disease, Parkinson’s diseases and type II diabetes, were found to be associated with the accumulation of amyloid deposits. Although formed by a diverse, structurally unrelated group of protein and polypeptide building blocks, this group of protein structures shares remarkable biochemical and biophysical properties. Taking a reductionist approach, we have previously shown that the formation of these amyloid entities could be recapitulated by the self-assembly of penta-, tetra- and even di-peptides. A pioneer work, which started as a simple control, revealed that even a single amino acid, phenylalanine, can self-assemble to form amyloid-like fibrils that possess the same biological and biochemical characteristics as full-length protein-derived amyloids. Even more surprising was to reveal that an increasing number of single metabolites can also form these amyloid-like structures and thus to further extend the “generic amyloid hypothesis”. Interestingly, these metabolites accumulate pathologically in individuals with IEM disorders. One common example is the high concentration of phenylalanine, which is found in the serum and tissues of phenylketonuria (PKU) patients, one of the most common IEM disorders. The label “may contain phenylalanine”, which is commonly used in the food and soft drink industry, may be negligible for most of the population, but is crucial for PKU patients, for whom consumption of phenylalanine is forbidden. Although each disorder is considered rare, as a group, IEM disorders constitute a very substantial part of pediatric genetic diseases, and in many cases lead to severe developmental abnormalities. Introducing the metabolite amyloid entities as the potential cause of the cell cytotoxicity and the resulting symptoms observed in IEM disorder patients suggests a potential new therapeutic target, which may lead to the development of innovative treatment to fight these maladies.

In the present paper, we explored this new idea by utilizing two polyphenolic compounds, (-)-Epigallocatechin gallate (EGCG) and tannic acid (TA), both previously shown to inhibit the formation of proteinaceous amyloids, to hinder the self-assembly process of metabolite amyloids. Interestingly, high content of EGCG is found in the dried leaves of green and white tea and TA is utilized for various applications in the wine industry. We demonstrate the ability of the two compounds to inhibit the fibrillation of adenine, phenylalanine and tyrosine, which accumulate in adenine phosphoribosyltransferase deficiency, PKU and tyrosinemia metabolic disorders, respectively. Moreover, the polyphenolic compounds could inhibit the cytotoxicity of the metabolite assemblies, indicating their therapeutic potential. Finally, the combination of molecular dynamics simulations and experimental methodologies enabled us to identify the differential ability of the compounds to work at different stages of metabolite amyloid fibrillation. This demonstrate once more the ability of nature to survive hard conditions and thus produce the best candidate drugs to treat the worst human maladies. 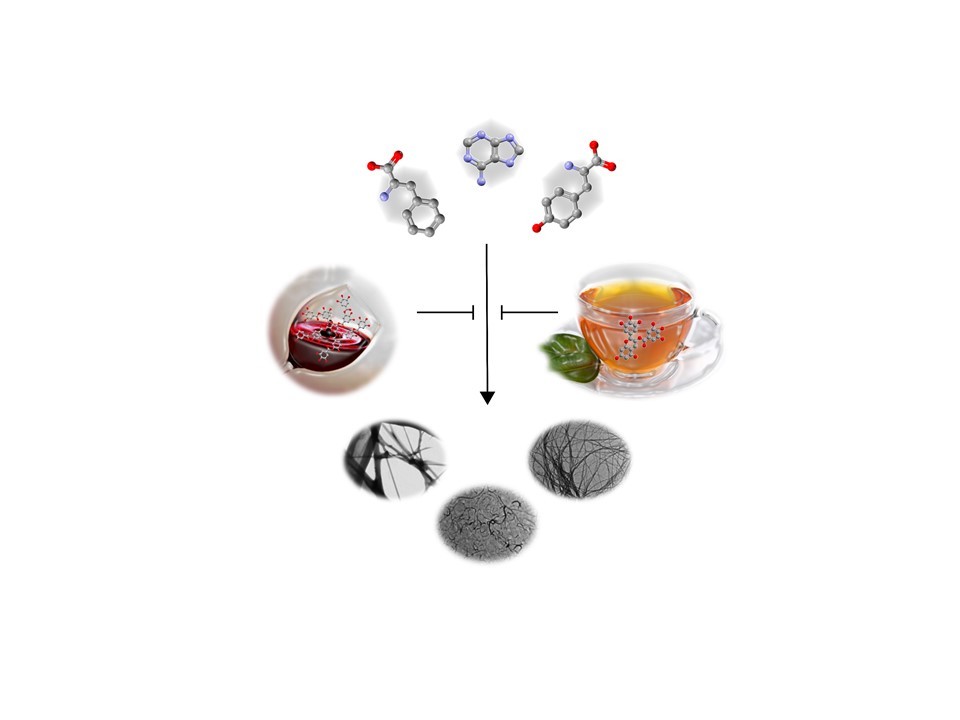