The rapid development of mobile electronic devices, electric cars, and renewable energy harvesting technologies has drastically changed the landscape of electrochemical energy storage devices, more commonly referred to as batteries and supercapacitors. New materials and new fabrication and assembly techniques are pushing the development of advanced charge storage devices. Among the many new classes of electrode materials, two-dimensional (2D) nanomaterials, such as graphene consisting of atomic thin sheet of carbon, have become a favorite of researchers due to their exceptionally large surface area to volume ratios and an absence of the solid-state diffusion problems that plague many conventional charge storing materials. However, conventional fabrication methods for producing 2D nanomaterials result in the nanosheets being stacked on top of each other like pieces of paper in a pile. This restacking of the nanometer-thin sheets impedes the movement and percolation of charge storing ions into the bulk of the electrode material. Therefore, these materials are usually limited to use in small devices that have electrodes with thicknesses less than 5 micrometers. In contrast, the electrodes of commercial supercapacitors used in transportation and elsewhere are about 100 micrometers thick. An ideal solution to this restacking problem would have the 2D sheets aligned perpendicular to the current collector, enabling direct transport of ions into the bulk of the electrode from the surrounding electrolyte. So far, only limited success has been demonstrated in the lab scale in mitigating the negative effects of restacking in layered materials.

Common approaches taken by researchers include increasing the spacing between the 2D nanosheets by intercalation of molecules in between the sheets or introducing nanopores. However, these methods often lead to low volumetric energy storage and tortuous pore systems that hinder ion transport, especially at high charging /discharging rates. There have been a handful of reports on controlled alignment of 2D nanomaterials using top-down processes that have had limited success, and no method demonstrated thus far could be scaled up for use in producing large devices.

This study reports on a scalable approach for preparing electrodes with 2D nanosheets in the vertical orientation via self-assembly. Our method relies on a marriage between soft matter assembly and functional hard nanomaterials, through which we create a coherent and long-range ordered liquid crystal phase of 2D sheets of titanium carbide, Ti3C2, a member of the MXene family. MXenes are a large class of 2D materials consisting of layers of transition metal(s) bonded by carbon and/or nitrogen. MXenes have unique chemical and electronic properties, three of which make them ideal for energy storage applications: 1) Large intrinsic pseudocapacitance due to redox reactions of the surface transition-metal atoms, which leads to higher energy densities when compared to carbon-based materials (e.g., graphene), 2) Their hydrophilicity, and 3) Exceptional electrical conductivity (up to ~8000 S/cm for freestanding films). Controlled vertical alignment of 2D Ti3C2 was achieved by simple mechanical shearing of a discotic lamellar liquid crystal phase of Ti3C2, which was composed of a mixture of Ti3C2 and a non-ionic surfactant. The resulting electrode films show rapid ion diffusion in thick films, exhibiting outstanding rate handling and nearly thickness-independent charge storage in aqueous electrolytes for electrode thicknesses up to 200 micrometers (or 0.2 mm), equal to or exceeding that of commercial electrodes.

Studies into directing the alignment of functional nanomaterials via the manipulation of self-organizing materials has just begun. The self-assembly approach demonstrated in our study is versatile and highly scalable, offering a general pathway to align a variety of 2D nanomaterials, not just MXenes, for a broad scope of potential applications, including batteries, filtration, catalysis, fuel cells, and photovoltaics. We envision that our work will stimulate both theoretical and experimental efforts to explore the fundamental science of liquid crystal mediated assemblies of colloidal nanomaterials that take advantage of the rich interactions between the colloids. In turn, it may allow other tailored nanoarchitectures, from vertical alignment to complex and spatially-defined 3D structures, that will allow exploration of new physical properties and phenomena, and create novel devices surpassing current technologies. 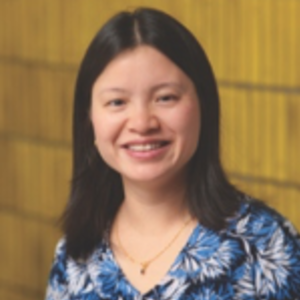 Shu Yang is a Professor in the Departments of Materials Science & Engineering, and Chemical & Biomolecular Engineering at University of Pennsylvania, and Director of Center for Analyzing Evolved Structures as Optimized Products (AESOP): Science and Engineering for the Human Habitat. Her group is interested in synthesis, fabrication and assembly of polymers, liquid crystals, and colloids with precisely controlled size, shape, and geometry; investigating the dynamic tuning of their sizes and structures, and the resulting unique optical, mechanical and surface/interface properties.
Follow