The paper in Nature Chemistry is here: https://go.nature.com/2LmeOpt

In condensed phase systems, the solvent is often thought of as simply a medium to hold the solute. A simple analogy would be a “solute” jellybean in a jar of “solvent” marbles. If we shake the jar, marbles jostle the jellybean, dictating its trajectory and potentially even distorting its shape as it gets squished. For condensed phase systems where the solvent does not strongly interact with the solute, this simplified picture is a reasonable approximation. For instance, our molecular dynamics simulations of sodium dimer (Na2) in liquid argon (Ar) reveal that the nonpolar Ar atoms act essentially like marbles. A solvent cage of Ar atoms traps the Na2, compressing its bonding electron density and thus increasing the molecule’s vibrational frequency. Furthermore, like the marbles squishing the jellybean out of shape, collisions between Ar atoms and the Na2 bonding electron density give rise to distortions with relatively large instantaneous dipole moments. This has the surprising effect of making the otherwise completely symmetric Na2 infrared active.

Real solvent molecules, however, are not hard, rigid, uniform marbles. Often, they are instead complex molecules with complex properties, and the jellybean in a marble jar analogy quickly falls apart for condensed phase systems where the solute and solvent interact, even when the interaction is only about as strong as a hydrogen bond. But does this really matter? After all, we as chemists are already well aware that the properties of the solvent can influence solute chemical reactivity, such as stabilizing products and determining reaction rate. However, we also know that many of the biological processes necessary for life, such as the folding of a protein into its biologically functional form, are controlled by delicate equilibriums. The majority of chemical reactions, particularly those relevant to biological systems, take place in solution. In many of these scenarios, the solvent, far from a mere spectator, may play an integral role in the dynamics and even chemical identity of the solute.

In our paper, we show using molecular dynamics simulations of Na2 in liquid tetrahydrofuran (THF) that, in such cases, local solvent molecules actually integrate themselves as part of the solute, dictating not only the bond dynamics but also the molecular identity of the solute. The interactions between the sodium atoms of Na2 and the oxygen atoms of the THF molecules lead to several stable coordination states, each with different number of solvent molecule around each end of the Na2 solute.

While these interactions would not be conventionally considered “bonds,” the discrete coordination states must surmount energy barriers of approximately 8 kBT, essentially undergoing a chemical reaction, to interconvert. Furthermore, each coordination state has its own bond length and dynamics as well as different infrared and UV-Visible absorption spectra. If we tried to explain this system as a simple Na2 “jellybean” in a jar of THF “marbles,” the washed out, average properties simply wouldn’t fit the dynamics and spectroscopy observed. Instead, for systems where the solute and solvent interact even as weakly as a hydrogen bond, the local solvent environment must be carefully considered to truly understand the condensed phase system. Maybe a better analogy for this system would be a jellybean in a jar of gooey gummy bears that pull and modulate the jellybean motion in unique ways. Better, but not perfect.

To get the full story, why not grab a jar of jellybeans or gummy bears and read through our paper, “Solvents Can Control Solute Molecular Identity," available at https://rdcu.be/OOi9. 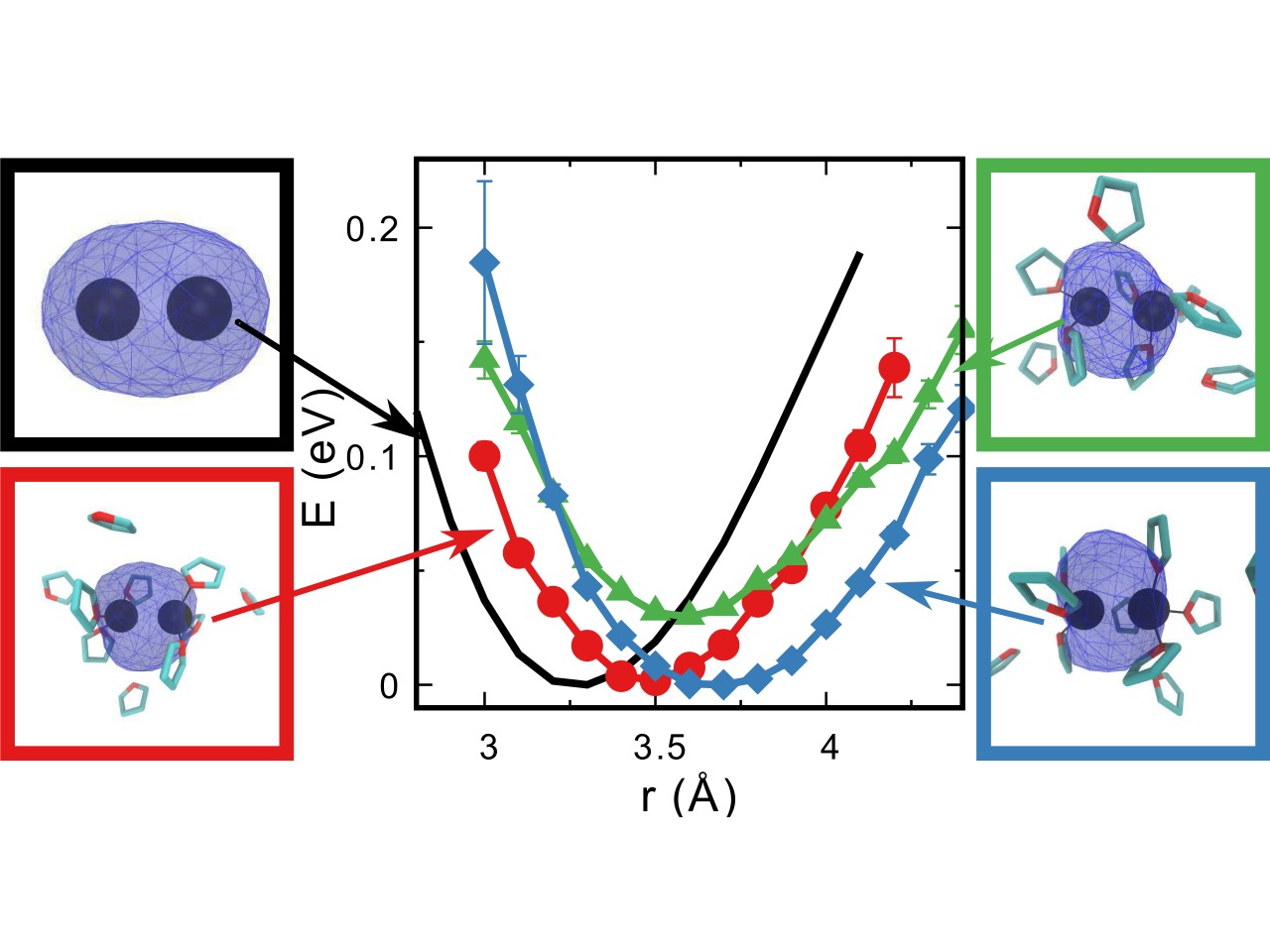