How can we crosslink fibrous hydrogels to stabilise them without affecting the open porous architecture that makes these materials so suitable for 3D cell culturing? Read our approach in Nature Communications.

Some years ago, we serendipitously found a completely synthetic hydrogel (PIC) that displayed the architecture and mechanical properties of a biological gel (Nature 2013, Nat. Commun 2014). This unique combination makes the material well suited for biomedical applications, for instance as a cell growth medium (Nat. Mater. 2016). We encountered only one potential problem: over the course of a cell growth study (21 days), the gel slowly deteriorated. This may not be too surprising, considering that network formation of the PIC gel is based on relatively weak hydrophobic interactions, but is certainly is inconvenient for long-term biological experiments.

We followed two routes in solving this problem. The first was to look at the fundamentals: What changes in the polymers or in the architecture of the network? We still don’t know. The second approach simply was to look for a solution to circumvent the problem: Can we crosslink the gel to achieve long-term stability?

Figure 1 | The crosslinking approach. First the fibrous gel is formed, then the crosslinks are formed selectively in the bundles.

For this approach, it is important to realise that common synthetic hydrogels (like PEG or acrylamide-based gels) are fundamentally different from biological gels or their mimics (like PIC). Nature’s gels are fibrous in architecture, which means at even at low concentrations (typically of the order of 1 mg/mL), a significant stiffness can be realised and that an open porous architecture is formed that allows for easy transport from small molecules to entire cells. As a bonus, these hydrogels display a unique mechanical response: strongly stiffen up under stress, a process called strain-stiffening.

Crosslinking such structure with typical crosslinking approaches (i.e. high crosslinker concentrations) will completely destroy the porous architecture and the associated advantages that this structure brings. As such, we started looking for methods that would stabilise the hydrogel by selectively crosslinking the polymers inside the bundles and retain the architecture; a route that was not developed yet.

As the project progressed, we realised that the synthetic nature of our synthetic, biomimetic hydrogel allows us to change the gelation conditions much more than would be possible with biological materials. For example, we can form gels (and subsequently crosslink them) at different temperatures that exhibit different mechanical properties with virtually the same network structure (and concentration). This level of variability is simply impossible with biological materials.

So far, we learned that clever processing of materials may give rise to unexpected properties and enormous control. The approaches that we present are generic and can be applied by anyone who is working with biological or synthetic fibrous materials.

As for the developed PIC hydrogels presented in our manuscript, currently, we study their long-term properties in biological experiments, aiming to solve the problem that we started off with. In addition, we explore the effect of the mechanical properties of the gels that are prepared at different temperatures (and have the same architecture), and contribute to the lively discussion: What physical aspects in an artificial extracellular matrix is important to cell behaviour? 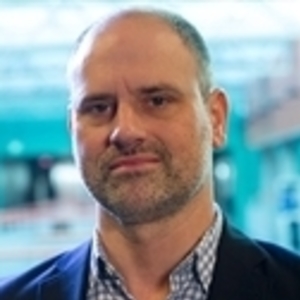 Paul Kouwer is Assistant Professor Molecular Materials at Radboud University in Nijmegen, The Netherlands. His research groups develops soft synthetic hydrogel materials that mimic many aspects of biological gels, like actin, collagen and fibrin. In addition, the gels are extremely sensitive towards stresses and deformations, which makes them ideal materials to explore for biomedical and soft robotics applications.
Follow