Nature, as many have said before, is the best chemist we know. Biological systems are capable of doing an enormous number of chemical transformations, the only limit appears to be the rate at which we can reveal them. The workhorses of these transformations are the enzymes that catalyse the reactions that ultimately sustain life. The attractiveness of enzymes for chemists, amongst other things, is that they are incredibly efficient, and can produce enantiomerically pure products that can only be dreamt of in synthetic systems. The caveat to all of this, which represents a major hurdle to universal use of biocatalysis, is that biological transformations are incredibly slow compared to their synthetic counterparts. Coupled with the fact that the chemical environments of the modern world are incompatible with nature, and enzymes – as nature intended them at least – become less attractive.

There are a number of approaches to overcome this problem, either by increasing enzyme utility by exploiting natural promiscuity (through techniques such as directed evolution or site directed mutagenesis), or by engineering methods of stabilising enzymes against unnatural environments and/or substrates. The former suffers a significant lag time by the bespoke nature of the modifications, and the latter frequently suffers loss in activity – often due to immobilization of the biocatalyst within a relatively rigid support.

We had success in stabilising soluble proteins in non-aqueous environments (ionic liquids in this case) through relatively minimal chemical modifications (J. Am. Chem. Soc. 138. 4494. 2016). The protein in this case was the rather simple blood protein myoglobin. As such, we were curious to see whether this technique would translate to enzymes: maintaining protein architecture is one thing, preserving function is another.

Using lignocellulosic biomass as a renewable resource for the production of chemicals, fuels, and plastics is a tantalising prospect in the wake of dwindling oil supplies. However, it remains recalcitrant to chemical treatments, and industrial scale processing is a challenge. Nature on the other hand, possesses a range of tools to convert biomass to the chemicals it requires. Unfortunately, the rates of conversion are too slow to be fully utilised industrially.

Ionic liquids are good solvents for biomass, including cellulose, and so we wanted to see whether a cellulytic enzyme would remain active once solubilized and stabilized in this unnatural environment. If we can increase the accessibility of cellulose, perhaps we could improve the bioprocessing of it. Initially, we were interested in glucosidase, as it forms part of the trio of enzymes that degrade cellulose: cellulases. Of particular interest to us was that this enzyme represents a bottleneck in the process, and so if we could improve this enzyme by using it in non-aqueous solvents, we would take a step towards making cellulose bioprocessing more efficient.

In this paper, we set out to stabilize a fully soluble form of glucosidase in ionic liquids. The chemical modifications we performed on the enzyme did exactly that, and by increasing the thermal stability up to temperatures as high as 137 °C, we pushed the optimal output of the enzyme to 30-times greater than what is possible in aqueous conditions. The reaction this enzyme catalyses is the hydrolysis of cellobiose to glucose – and under normal conditions, these soluble glucose dimers are the only substrate the enzyme is expected to work on. However, we were tipped off to some possible promiscuity of the enzyme when through the chemical modification, high concentrations (ca. 10 mg.mL-1) of glucosidase in the dialysis step, would weaken the cellulose dialysis tubing. We took this to its logical conclusion, in the knowledge that ionic liquids were good solvents for cellulose, and showed that glucosidase could degrade cellulose on its own, in a demonstration of solvent-induced promiscuity. Not only had we shown that an enzyme can be significantly enhance in ionic liquids, but we discovered in the process that we could reduce the number of enzymes required to break down cellulose to sugars from 3 to 1.

Through the work presented in this paper, we have shown that through both consideration of solvent, and enzyme modification, it is possible to significantly enhance enzyme activity. This work now provides the framework to perform biocatalytic reactions that would otherwise be difficult to achieve in conventional solvents. As such, large scale deployment of industrial biocatalysis – even outside water - is one step closer. 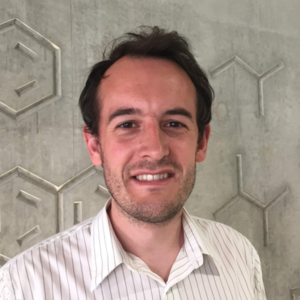