Idealised representation of the MINT catalysts. Carbon nanotubes (silver) are modified with macrocycles (carbon in green, sulfur in yellow, oxygen in red and hydrogen in white) that regulate their catalytic activity towards the reduction of nitrobenzene (carbons in magenta and nitrogen in blue) to aniline (carbons in cyan and nitrogen in blue). Copyright: M. Eugenio Vázquez-Sentís (CiQUS / Universidad Santiago de Compostela).
Emilio M. Pérez
Senior Research Professor, emilio.perez@imdea.org
Follow
Like Liked by Adam West

One of the most spectacular scientific advances of the last decades has been the connection of molecular fragments through the "mechanical bond". In mechanically interlocked molecules, the different components are connected thanks to their topology, in the same way as the links that are part of a chain, for example. There are no direct connections (covalent bonds) between them, but nevertheless they cannot be separated without breaking their structure. This new type of chemical bond has some unique properties: a particularly interesting one is that it allows the movement of one component of the final structure with respect to the others. Some of the pioneers of the mechanical bond have taken advantage of these properties to build artificial molecular machines capable of carrying out complex functions, such as exerting mechanical forces or synthesizing peptides with a specific sequence, imitating natural molecular machines such as myosin or ribosome, respectively. The relevance of this field was underlined with the award of the Nobel Prize in Chemistry in 2016 to Stoddart, Sauvage and Feringa for the design of artificial molecular machinery. Both Stoddart and Sauvage base their molecular machine designs on the properties of the mechanical link. Single-walled carbon nanotubes (SWNTs) are tubes formed by a graphene sheet rolled in on itself. The combination of the all-carbon sp2 conjugated network and their quasi 1D dimensionality confers SWNTs with exceptional physical properties that make them one of the most attractive nanomaterials. For example, they are stronger than steel and can be semiconductors with a well defined band-gap, like silicon, on which all current electronics are based. Until recently, SWNTs had been combined with molecules via very strong bonds (covalent bonds) that lead to very stable compounds. Such connection, however, implies a change in the structure of the nanotube and therefore in its properties. It would be analogous to nailing an advertisement to a post using a thumbtack: the link is strong, but it leaves a hole in both the advertisement and the post. Weak non-covalent forces have also been used, which keep the structure of the nanotubes intact, but typically yield kinetically unstable compounds. The comparison in this case would be to tape the advert to the post. Neither the advertisement nor the post are damaged, but it is relatively easy for the ad to fall off.

At IMDEA Nanociencia, we have been very busy developing methods for the chemical modification of carbon nanotubes by mechanical bonding, the first example of mechanically interlocked carbon nanotubes (MINTs).1,2 This type of compounds are as stable as covalent derivatives, but at the same time as respectful of the initial structure as the non-covalent compounds. In this case, imagine a cylindrical advertisement through which the post is threaded: they are very tightly connected, because we cannot separate the ad from the post without breaking it, but the link does not leave holes in the post or in the advertisement. In addition, we can move the ad up and down the length of the pole, or rotate it, to look at it from whichever angle we choose!

The group at Alex’s PhD defence, around the time most experimental data were being collected. Matías Blanco, the first author, is second from right, sporting a beard. Other contributors are: Alberto de Juan, first from left, Belén Nieto-Ortega, fifth from the left, Alejandro López-Moreno and Mariano Vera-Hidalgo (left to right, crouching), and a suited up Emilio M. Pérez.

In results published in Nature Communications,3 we describe how to build mechanized SWNTs catalysts with control over their catalytic activity. SWNTs are often very good catalysts in many relevant chemical processes, since all of their atoms are surface atoms. However, controlling their catalytic activity is not easy. In contrast, Nature applies a multitude of strategies (alosterism, chemical modification, direct competition for the active site, compartmentalization, etc.) to increase or decrease the catalytic activity of enzymes, and maintain homeostasis.
In our MINT strategy, the rings around the tubes are used to modify the electronic properties of the nanotubes, which in turn results in a regulation of their catalytic activity, making them better or worse catalysts. This new control method presents a unique combination of the properties observed in natural regulation strategies: the link between the effectors (the macrocycles) and the catalyst (the nanotubes) is noncovalent, yet stable thanks to the mechanical link, and its effect is remote but not allosteric, since it does not change the structure of the active site (the surface of the nanotube). 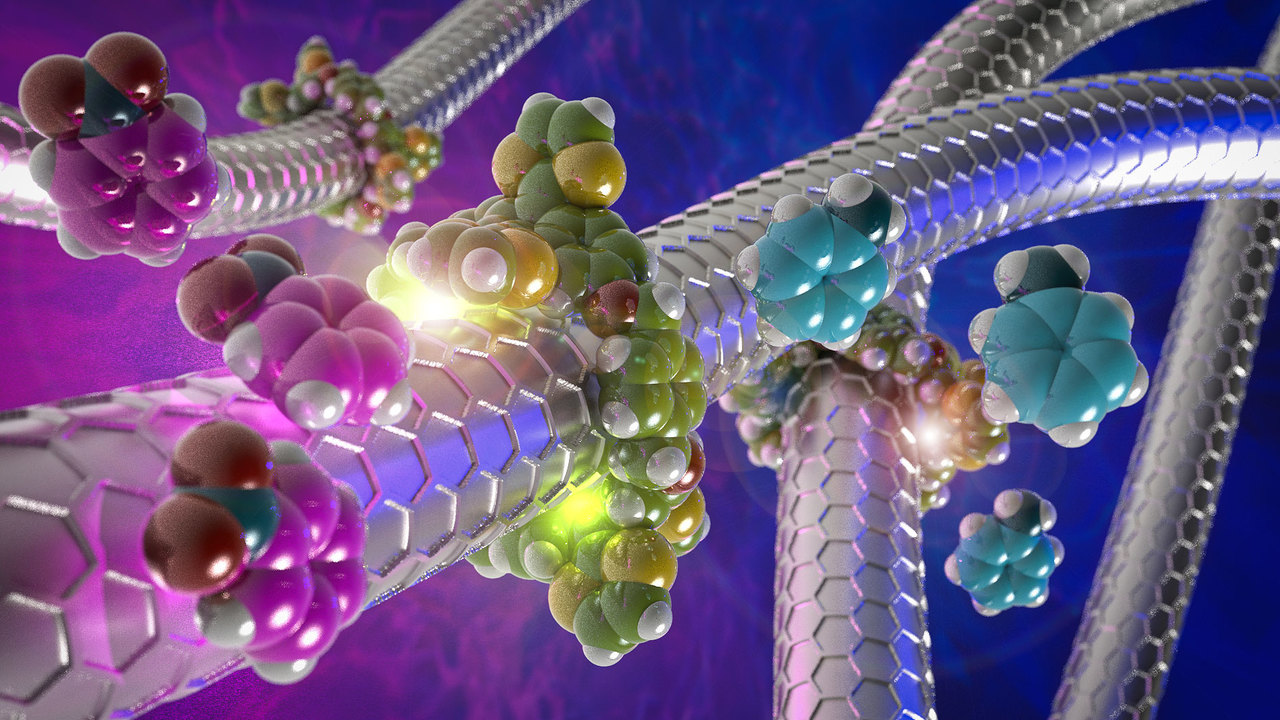 Idealised representation of the MINT catalysts. Carbon nanotubes (silver) are modified with macrocycles (carbon in green, sulfur in yellow, oxygen in red and hydrogen in white) that regulate their catalytic activity towards the reduction of nitrobenzene (carbons in magenta and nitrogen in blue) to aniline (carbons in cyan and nitrogen in blue). Copyright: M. Eugenio Vázquez-Sentís (CiQUS / Universidad Santiago de Compostela).