Correlating activity, selectivity and stability with the morphology and composition of nanocatalysts is crucial to advancing the knowledge in chemical transformations which are important to progress towards a more sustainable economy.
Raffaella Buonsanti
Assistant Professor, EPFL
Follow
Like

In catalysis science stability is as crucial as activity and selectivity. Understanding the degradation pathways occurring during operation and developing mitigation strategies will eventually improve catalyst design, thus facilitating the translation of basic science to technological applications. To date, particle sintering and/or dissolution/precipitation reactions have been identified as the most common reasons behind performance loss in nanoparticle catalysts. Yet, in-depth studies at the atomic level are highly desirable to elucidate alternative pathways, being the latter potentially catalysts/reaction dependent.

Electrochemical CO2 reduction reaction (CO2RR) into value-added chemicals is among the most challenging and fast developing fields in catalysis. Because it enables concurrent carbon fixation and renewable energy storage, this conversion represents a sustainable approach to mitigating global challenges arising from the substantial utilization of fossil fuels and from the ever-increasing atmospheric CO2. Cu is an appealing catalyst for CO2RR, as it produces appreciable amounts of highly sought after energy-dense hydrocarbons. Others and us have shown that the size and the morphology impact the reactivity of copper.

In this contribution, we combine state-of-the-art synthesis, characterization and theory (big thank you to the group of Prof Marzari for the computational contribution!) to reveal a nanoclustering degradation mechanism of Cu nanocatalysts during electrochemical CO2 reduction by studying the structural evolution concomitantly with the catalytic performance over time. We identify the negative potential applied to reduce CO2 as the major driving force of the nanoclustering phenomena. The observation of the same behavior in other metallic nanocatalysts (Ag and Pd) highlights the generality of the phenomena. Potential-induced nanoclustering has not been studied before in nanoparticle electrocatalysts, being sintering and Ostwald ripening the most common mechanisms reported to date. Thus, we offer a novel outlook on future investigations of stability and degradation reaction mechanisms of nanocatalysts for electrochemical reduction reactions (i.e. oxygen reduction reaction, water electrolysis, CO2 and N2 reduction).

Now, the open question is: what is the best mitigation strategy against nanoclustering? Should we consider catalyst wrapping/physical barrier or perhaps a smarter chemical strategy wherein we modify the cohesive energy of copper by introducing different “promoters” (i.e. properly designed ligands and interfaces)?

During the review process, the Referees asked us about in-situ/in-operando transmission electron microscopy to study the catalyst reconstruction during operations. We fully agree that this is THE next step and indeed we are moving towards this direction, yet along the way we are discovering the unique challenges associated with CO2RR compared to the study of other electrocatalytic reactions. But stay tuned, we promise to get there!

To read the full story, check our paper here: go.nature.com/2vIJ1rV 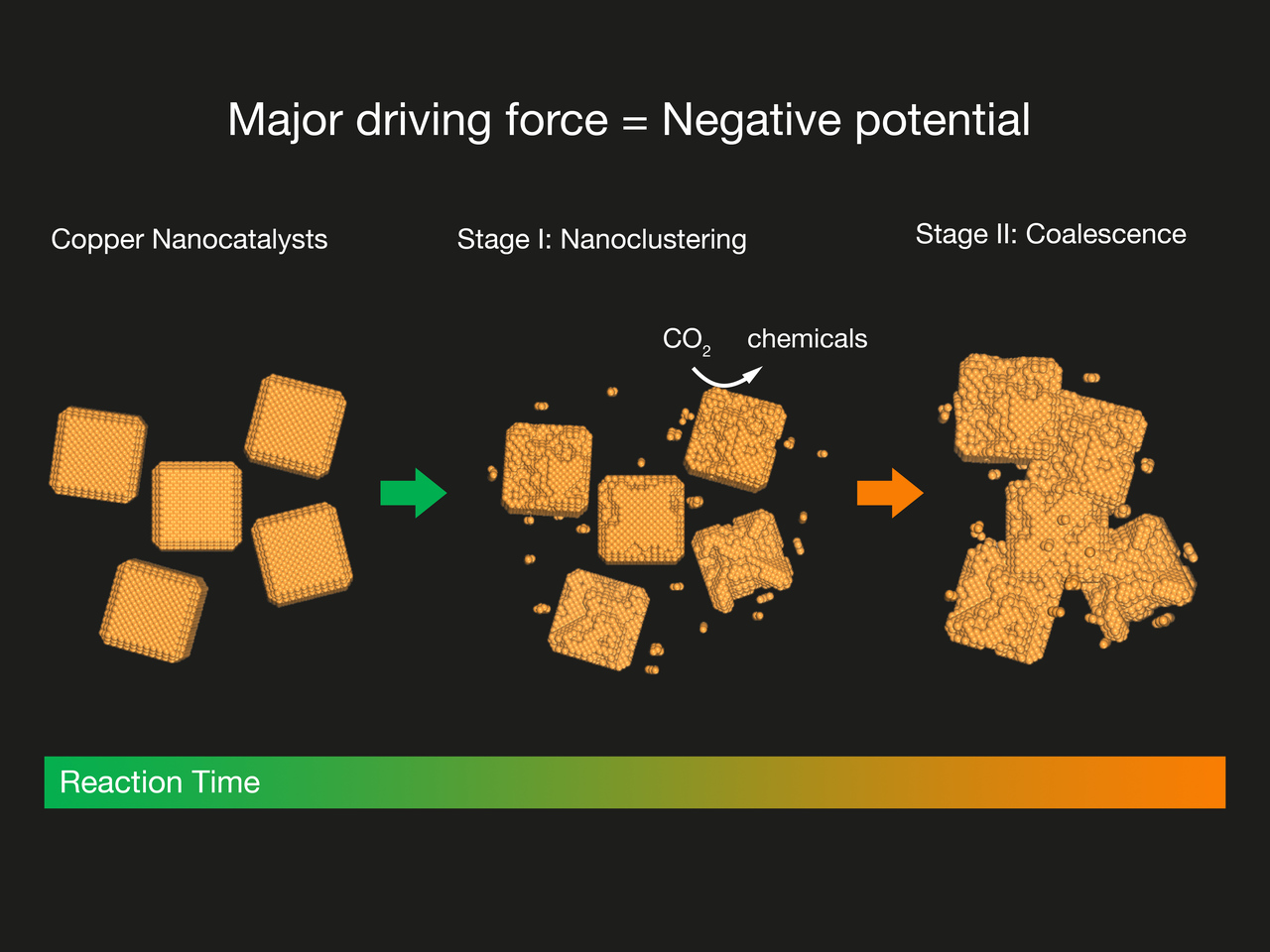 Correlating activity, selectivity and stability with the morphology and composition of nanocatalysts is crucial to advancing the knowledge in chemical transformations which are important to progress towards a more sustainable economy.