The paper in Nature Communications is here: https://go.nature.com/2nkTwOk

While H2O is the most well-known chemical formula in the world, the second place probably goes to CO2 – the carbon dioxide molecule. We all know it as a colorless and odorless gas, the fizz that makes soda sparkling. It has also gained notoriety as the primary greenhouse gas emitted through human activities and associated with global warming. But perhaps not many people are aware of the solid form of CO2, the 'dry ice', used mainly as a cooling agent. And even less keep asking themselves what happens when CO2 is subjected to extreme pressures corresponding to those of the Earth’s interior. Solving this puzzle serves not only to satisfy the curiosity of scientists. As carbon dioxide may be dragged down into the Earth's mantle through the subduction zones between the tectonic plates, the question of its behavior in extreme thermodynamic condition may have important geological consequences.

The experimental studies conducted in the past decades have shown that while below 40 GPa (400000 atmospheres) the CO2 molecules pack differently giving rise to various crystalline arrangements, they always keep the perfectly linear shape. Yet for almost 20 years we know that at still higher pressure and temperature we can find a completely different carbon dioxide to the one we are used to. In this structure, known as the phase V, the single molecules cease to exist yielding an ordered network of CO4 tetrahedra interconnected in a way similar to that in which silicon and oxygen atoms are bound in crystals of common quartz, the mineral that makes up most sand. When the temperature is lower, the amorphous material (known as carbonia) is formed on compression – a carbon counterpart of the silica glass. This transition from the isolated species to a three-dimensional architecture, although may seem rather hard to believe according to the textbook rules of chemistry, is not as far-fetched as it seems. High pressure increases the packing density and the coordination number, hence suppressing molecularity. This in turn affects strongly the electronic structure making elements behave like the heavier elements in the same periodic table groups. So called extended phases where covalently bonded atoms are linked into an infinite network are known to exist at extreme pressure conditions and have been found for other species (such as e.g. nitrogen or carbon monoxide), which are generally known as molecular bodies at ambient conditions.

But then there is another mystery to ponder. Several studies have shown that the phase V actually dissociates at high temperature to elemental oxygen and diamond. Moreover, according to these reports, the reaction threshold is roughly linear with a negative slope in the pressure-temperature diagram: it means the higher the pressure, the lower the temperature needed to trigger splitting into elements. Simple extrapolation of these data compared to the geothermal gradient profile expects that there is no polymeric carbon dioxide in the deep Earth. However, these experiments were not performed in the conditions relevant to terrestrial interior. In particular, the maximum pressure achieved in the lab while studying carbon dioxide was around 70-80 GPa, much lower than in the lowermost Earth's mantle, a mineral layer close to the metallic core. On the contrary, theoretical predictions indicated the unusual stability of phase V, excluding the possibility of its decomposition.

It appears therefore that the nurturing question on the stability of carbon dioxide may be interesting both for the chemists and geoscientists. Thus we tried a collaborative project involving the group of chemists from the European Laboratory of Non-linear Spectroscopy LENS (Sesto Fiorentino, Italy) and Earth scientists from the Department of Mineralogy and Crystallography at the University of Vienna. The success was based on the expertise of senior researchers, Roberto Bini and Ronald Miletich, supplemented with the enthusiastic involvement of two highly talented young fellows, Martin Ende and Demetrio Scelta. The task could not have been accomplished however, without Mohamed Mezouar and Gaston Garbarino - the beamline scientists at the European Synchrotron Radiation Facility (ESRF) in Grenoble, France, who actively assisted during the synchrotron radiation experiments sharing their know-how and long time experience.

To achieve our goal, we used a laser-heated diamond-anvil cell – a small but powerful device capable of compressing the sample to immense pressures and heating it to extreme temperatures simultaneously. CO2 was trapped inside a minuscule chamber, between the tips of two diamond anvils with some specks of magnesium carbonate to enhance the laser absorption. Initial compression at room temperature led to glassy carbonia as we expected. But after the laser blast boosted the temperature to 2700 K (2400 °C) while maintaining the pressure at 120 GPa (1.2 million atmospheres) the only material found between the diamond tips was the polymeric phase V of carbon dioxide.

This finding may change our views of the origins of super-deep diamonds and the terrestrial cycle of carbon – the building block of life and the backbone of organic chemistry, which behavior, transport and speciation in the depths of our planet is, however, still poorly understood. The results of the previous studies may be justified considering possible catalysis of the dissociation reaction by contact of the sample with the piece of metal used to absorb the laser beam, which was replaced in our experiment with rather inert magnesium carbonate. But still, while the issue of stability of pure carbon dioxide in the lowermost mantle conditions was largely answered, other questions sprang up immediately. If indeed the phase V is so stable, can the dissociation reaction be actually triggered in the contact of polymeric carbon dioxide with the minerals present in the deepest layer of the mantle? Or is it rather catalyzed through the interaction with the outer core made of an iron-nickel alloy? Additional experiments are needed to verify these hypotheses, but one thing is for sure: carbon dioxide seems a tougher guy than we had previously expected. 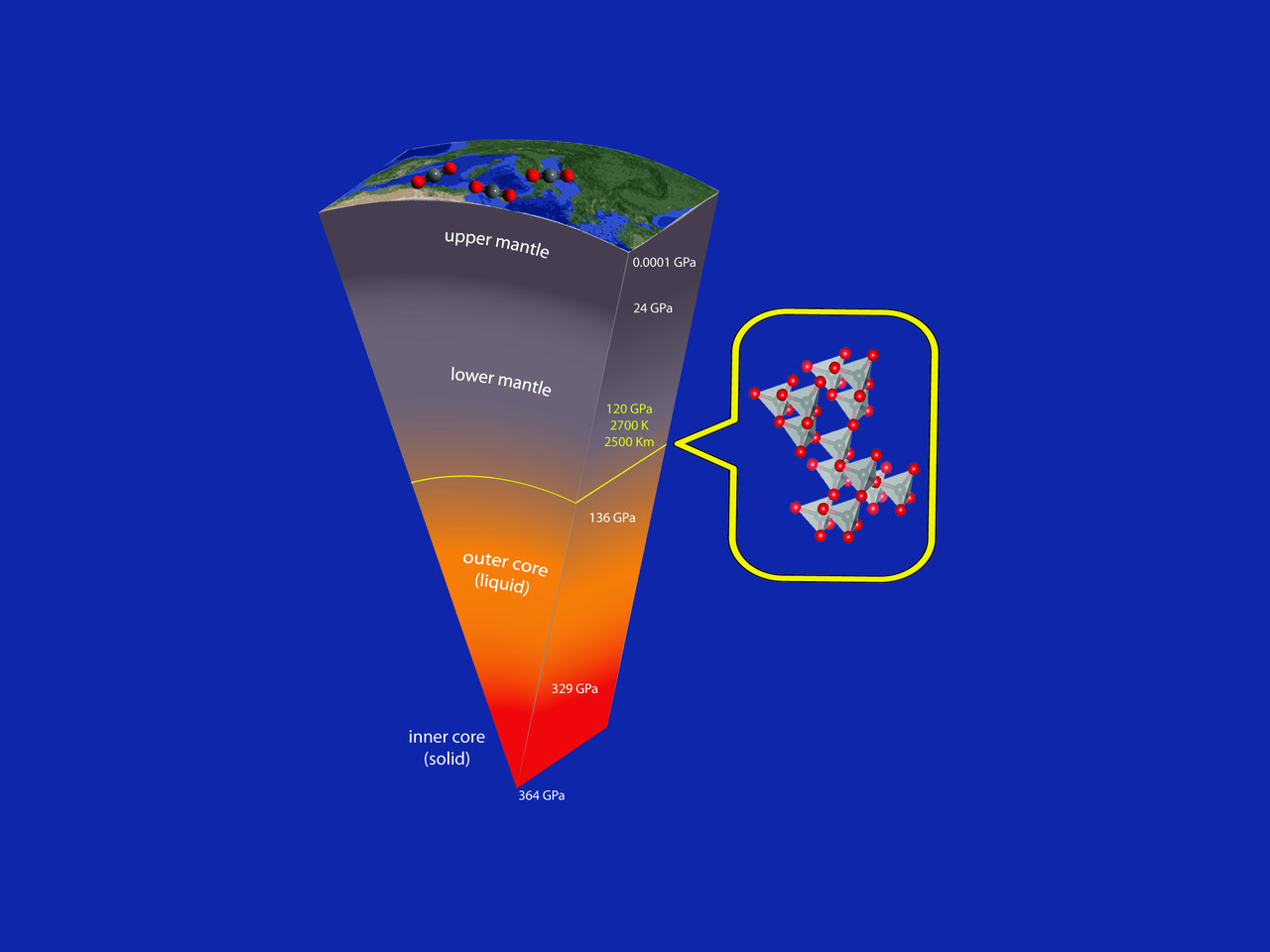