Inspired by self-assembling biomolecular systems, and with a little bit of luck thrown in for good measure, we have created a new, carbon-based nanomaterial which could be key to future catalysis and photovoltaic technologies.

Polynuclear coordination complexes are of great interest for the development of new applications, in particular in the area of catalysis. These compounds consist of organic ligands linked by multiple metal atoms in close proximity. In these systems, magnetic and electronic interactions between such metal atoms can give rise to cooperative effects, enhancing chemical reactivity.

Catalysis based on polynuclear compounds relies on redox reactions where the charge state of the metal atoms varies by exchange of electrons with the reactants. In these processes, the electronic configuration of the metal atoms is crucial. Using transition metals as reactive polynuclear centres can be beneficial, since their d electrons allow for multiple spin and oxidation states (and facile and reversible variations of these). Examples of catalytically functional polynuclear complexes include multi-iron compounds that mediate oxygen fixation and C-H bond hydroxylation, di-ruthenium compounds that enable C-H bond amination, etc.

Synthesising polynuclear complexes is challenging. Usually, wet chemistry synthetic methods are used. However, only a limited number of systems have been realised by these means. In particular, only a few compounds based on iron (Fe) – an important element for catalysis – have been achieved.

In this work, we used methods of supramolecular chemistry to synthesise, on a silver surface, one-dimensional (1D) metal-organic nanostructures where well-defined, quasi-linear clusters formed of three Fe atoms act as linkers between the coplanar terpyridine (tpy) groups of facing, flat-lying aromatic molecules (tpy-phenyl-phenyl-tpy; TPPT). Our approach consisted of depositing organic ligands and Fe atoms onto a clean silver surface, sequentially, from the gas phase, in ultrahigh vacuum. The coordination nanostructures are the result of on-surface metal-organic self-assembly at room temperature.

By using a combination of scanning probe microscopy (SPM) techniques at cryogenic temperatures, density functional theory, SPM imaging simulations and X-ray absorption spectroscopy, we were able to fully characterize the atomic-scale properties (structural and electronic) of the metal-organic system.

Not only is this the first time that this tri-iron compound is synthesised, but it is also the first time that such suite of techniques is used for a full atomic-scale characterisation of a polynuclear complex. It is important to note that the collaboration with Prof. P. Jelinek and his group from the Czech Academy of Science – experts in nanoscale electronic structure theory and SPM imaging simulations – was instrumental to fully understand our experimental results and resolve the atomic-scale properties of the unusual nanostructure.

The main message of our work is that the Fe atoms in the trinuclear centre are not chemically equivalent. The tri-iron cluster is in a mixed valence configuration, with the two outer atoms in a chemical environment close to a 2+ charge state, and the central one in a significantly less positive state. Importantly, this unusual metal-organic motif is stabilised by a local accumulation of electrons at the interface between cations, ligands and silver surface.

The role of the silver surface is crucial for enabling the trinuclear coordination. It confines the atoms and ligands to two dimensions (2D), offers balanced surface-adsorbate interactions, and allows for efficient adsorbate diffusion at room temperature, resulting in a morphology and electronic and chemical properties that are dramatically different from those of analogous complexes achieved in solution via conventional wet chemistry synthetic methods.

Our result is, to some extent, serendipitous. Initially, we were (wishfully) aiming to synthesise a coordination motif consisting of a single Fe atom linking two tpy-containing ligands, with the tpy groups in an orthogonal geometry, similarly to what can be achieved via wet chemistry approaches. The motivation for realizing this motif stemmed from its electronic properties, promising for light-harvesting and photocatalysis. The hypothesis was that the (relatively unreactive) silver surface would allow for molecular adsorption but at the same time offer limited molecule-surface interactions, enabling out-of-plane, orthogonal coordination.

The electronic properties of our unusual tri-iron complex not only maintain promise for light-harvesting and photocatalysis applications, but further pave the way to potential nanomaterials with novel catalytic and magnetic functionalities. Our system exhibits properties – first-row trinuclear transition metal centre with mixed valence – that are extremely useful and sought after for catalysis. Our self-assembly approach can further allow for the design of 2D arrays of functional multinuclear sites, with nanoscale precision.

You can read the full story in our Nature Communications article here. 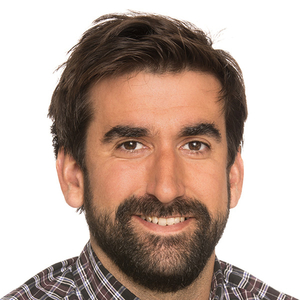