The long spin coherence times of nitrogen-vacancy centers in diamond under ambient conditions and their high photo-stability make diamond outstand among a variety of bio-sensors. Especially when the sensor is made with nanodiamonds, the associated spatial resolution allows cellular machinery to be studied at the subcellular level.

Despite of its high sensitivity to magnetic fields, current diamond bio-sensing is largely limited by its low sensitivity to parameters such as temperature and pressure, and even worse, insensitivity to a broad range of parameters including pH, sugar, and non-magnetic ions and biomolecules, which are key factors in biology.

To exploit the advantages of diamond sensing for studying cellular machinery, a possible approach is to use hybridization, in which a transducer converts the variation of bio-relevant parameters to the magnetic field change that can be readily detected by diamond NV centers. The availability of various stimulus-responsive hydrogels enables the implementation of such a scheme.

In designing a hybrid nano-sensor, we grafted hydrogel around a nanodiamond (ND) to form a core-shell structure, on whose surface a few magnetic nanoparticles (MNPs) were then docked. The thus formed ND@hydrogel-MNP hybrid nanosensors have sizes about 600 nm in diameter. The hydrogel was designed to undergo a volume phase transition upon the change of a specific parameter in the range of interest. The volume phase transition of the hydrogel shell and hence the sharp distance variation between the ND and the MNPs induce a large change of the magnetic field from the MNPs that can be sensed by NV centers in the ND via optically detected magnetic resonance.  In the proof-of-the-concept demonstration, temperature-responsive poly(N-isopropylacrylamide) (pNIPAM) hydrogel was adopted. Temperature sensing by a single hybrid sensor shows enhanced sensitivity and good reversibility in repeated measurements. The hydrogel can be chemically engineered to be responsive to various stimuli (glucose, pH, enzyme, etc.), so the hybrid scheme can be extended to the detection of a broad range of biochemical parameters. 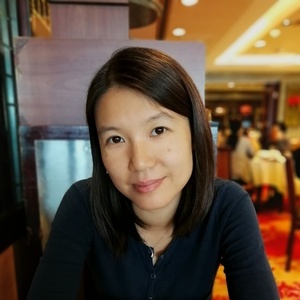