The discovery of conducting polymers in the 1970’s opened up a huge field of bustling research into the development of new types of material for a range of devices like photovoltaics, biosensors, LEDs and transistors.  An important factor in the development of these polymers is the ability to engineer their chemical and physical properties for a chosen application.  For example, when developing a semiconducting polymer for photovoltaics, the side-chains typically need to be branched to disrupt stacking in order to give the desired morphology.  However, for transistor materials, stacking is important for efficient charge transport, so linear side-chains are often more desirable.  Side-chain engineering is therefore crucial to the performance of these polymeric semiconducting devices.

In the vast majority of cases, side-chain engineering occurs during the synthesis of the monomers, prior to polymerisation.  Often side-chains are introduced in the early stages of synthesis, meaning that if the resulting polymer does not exhibit the desired properties, the monomer will have to be re-synthesised which can be a rather lengthy and costly process. Additionally, adding functional groups to side-chains can be difficult due to their inherent reactivity which might not survive the polymerisation conditions.  Because of these problems we sought to create a methodology in which a range of polymers could be readily modified after polymerisation, such that a variety of different side-chains could be added to the same baseline material, negating the need for bespoke monomer synthesis and multiple polymerisations.

Previous work from Prof. Martin Heeney’s group (led by myself and Abby Casey) demonstrated how electron deficient fluorinated 2,1,3-benzothiadiazole (BT) monomers could be substituted with thiols, alcohols, amines and cyanide, under nucleophilic aromatic substitution (SNAr) conditions.   Building on this work, the challenge was to develop conditions which would allow the reaction to be performed directly on a fluorinated polymer backbone.

Gratifyingly, working initially with a copolymer of 9,9-dioctylfluorene and fluorinated-BT we found that the fluorine could be substituted quantitatively with an alkylthiol and, as a result, the amount of thiol reacted onto the polymer backbone could be carefully controlled. We then moved on to demonstrate that the substitution worked with a range of different co-polymers, and that alcohols as well as thiols were suitable nucleophiles. Even the challenging coupling of a thiol-capped polymeric nucleophile was successful, resulting in the facile formation of a graft copolymer and truly demonstrating the versatility of the reaction.

With this tool kit for quickly altering the properties of semiconducting polymers we then moved onto applying this to the development of semiconducting polymer nanoparticles.  These nanometre sized fluorophores exhibit large extinction coefficients, high quantum yields and low-toxicity which makes them a potential exciting alternative to quantum dots for the ultrasensitive detection of biomarkers.  Working with Chris Wood and Phil Howes (postdocs in Prof. Molly Stevens’ group) we modified a polymer backbone to contain both azide and carboxylic functionality, something that would be challenging to do by more traditional methods. From this we created nanoparticles that could undergo two biorthogonal reactions on the same nanoparticle surface and demonstrated their dual reactivity in a model system. This work paves the way for the development of more complex biosensors and theranostics (devices that detect a disease and deliver a treatment) based on these extremely useful and now more easily modifiable semiconducting materials.

To see the full article in Nature Communications click here. 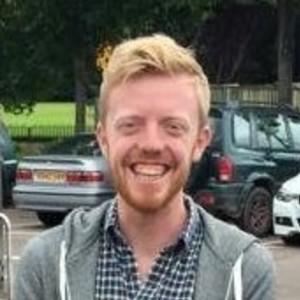