How reduced can you go?

Polyoxometalate clusters are well known oxo-anion clusters mainly based on V, Mo, W and are highly redox active. In this regard a few years ago, we showed that they could act as redox-mediators in the splitting of water. Previously, we showed how low-power energy inputs (characteristic of renewables) could be used to electrolyse water to produce pure hydrogen and oxygen regardless of the electrolytic current density by employing a polyoxometalate cluster - as soluble redox mediator (an “Electron-Coupled-Proton Buffer”, ECPB) in a new type of electrolyser device. This also enabled a new approach to be taken to on-demand hydrogen production via electrolysis: the hydrogen can now be produced remotely from the electrochemical cell over a fixed catalyst bed, increasing the rate of hydrogen production by a factor of over 30 compared to state-of-the-art proton exchange membrane electrolysers at equivalent catalyst loadings. However, our previously-reported systems all suffer from rather low electron storage densities: normally only two electrons can be stored reversibly per mediator molecule, which means that large volumes of solution are required for decoupled electrolytic hydrogen production. The large volumes of solution involved also preclude the use of the reduced electrolyte as an energy storage medium in its own right: as so much liquid is needed to store a few electrons it is not practical to use this as a long-term energy carrier (e.g. in a redox flow battery). If the number of electrons stored per mediator molecule could be increased by an order of magnitude, then one would have a viable electrolyte system which could be reduced in an electrochemical device using renewable power inputs, and then directed either to decoupled hydrogen (fuel) production or used as a high energy-density electrolyte in a redox flow battery (direct energy storage).

The problem is that in during the last 20-30 years, despite the vast increase in electrochemical studies exploiting the rich and dynamic properties of polyoxometalates, the number of electrons that could be reversibly stored was thought to be limited to no more than 6. In our studies we set out trying to see if we could store more electrons by just pushing the system as far as possible electrochemically. It was, hard, but it seemed possible to go beyond 6, maybe to 8 or even 12. Then we made a breakthrough when we realised it was possible to reduce the [P2W18O62]6− cluster by up to 18 electrons in water, and reversibly add and remove the electrons in a flow-battery system giving a practical discharge energy of 225 Wh L-1. But why was this not observed before? I did have some idea this would work since I’d already shown my team informally it was possible to dissolve sodium metal in an aqueous solution of polyoxometalate with it turning blue and without the system catching fire (well not immediately anyway, see this youtube video (don’t try this in your lab / at home):

A reduction of the cluster in solution by 18 electrons (amounting to 1 electron per metal centre) seems logical but had not been achieved. To achieve this goal, we had to do two important things.  The first was the realisation the concentration of the cluster had to be increased from the low levels typically used for electrochemical investigations (2 mM) to a much higher concentration (100 mM). Secondly, we found that using a lithium counter ion allowed the system to reach this incredible redox level. Not only does the system act as a flow battery, but reduction in the concentration, or the addition of a catalyst, can release the charge as hydrogen gas very rapidly. This means the highly reduced cluster system might lead to new flexible energy systems both for stationary use and electric vehicles. The fact that the energy is carried in an aqueous liquid form might even mean that it would one day be possible to fill up electric cars, powered by such a battery, with the charged liquid. Whatever the future, polyoxometalates just got a lot more reduced.

The link to the article in Nature Chemistry is here: https://rdcu.be/4sN7 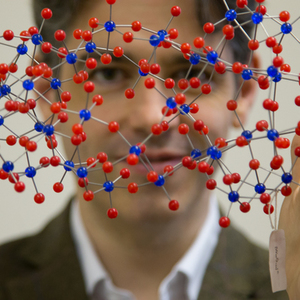