We became interested in metal-mediated strong bond activation through a non-obvious connection to our ongoing research on directed alkene functionalization.  At the time, a postdoc in our lab, Dr. Kin S. Yang, was curious about a series of somewhat surprising results suggesting the reversibility of key steps in Pd(II)-catalyzed hydrofunctionalization reactions developed in our lab. In one experiment, for instance, an alkene substrate containing a pendant alcohol was subjected to standard  Pd(II)-catalyzed hydrofunctionalization conditions. We predicted that the intramolecular alcohol would compete with the intermolecular nucleophile, giving rise to a mixture of products. Instead only the intermolecular nucleopalladation product was observed. To rationalize this observation, Kin proposed that the intramolecular attack does indeed occur faster than an intermolecular attack but that intramolecular attack is reversible. Thus, the transient metal-bound alkene can still be trapped by an intermolecular nucleophile

To probe this “retro-nucleopalladation” (or “β-oxygen elimination”) process further, Kin set up an exchange experiment using a carbon leaving group. Indeed, in the event he saw exchange of the nucleophile at 10% yield by 1H-NMR. This result was included at the end of a Full Article, providing support that every step of the catalytic cycle was potentially reversible. The implications of this finding were not immediately obvious.

As Kin was preparing to leave for a new position at Gilead, the Engle lab welcomed our second crop of graduate students (including myself). Each of the four incoming students selected a project (or projects) that piqued his/her interest, and I decided to pursue follow-up studies on β-X elimination. Here, we were motivated by a very simple question: if this catalytic system could break hindered C(sp3)–C(sp3) bonds, what other types of bonds could we break?

We quickly generated a collection of highly interesting yet totally unfocused data, jumping hectically from one idea to another. Could we open heterocycles? Did it work with fluorine? Were amino acid substrates compatible? It was a year of chaos—albeit, an exciting sort of chaos! Though there was no clear focus at the start, we nevertheless succeeded in gathering bits and pieces of crucial data along the way. It was not until nearly one year later that everything began to fall into place after we sat down to write the first draft. Missing entries were filled in and mechanistic studies became a major focus. We finally had the project in polished form at the end of a long and arduous journey. We submitted the manuscript with confidence and continued feeling confident—right up until the day it was rejected.

The initial reviews spanned the entire gamut—from highly enthusiastic to utterly unimpressed. Disheartened but persistent, we spent a few days reflecting on the reviewers’ comments and the data itself. We also sought the counsel of our senior colleague, Professor Jin-Quan Yu, who provided invaluable advice. After thinking it over, we recognized that our framing of the research did not do it justice. By opting for a highly technical introduction, we failed to communicate the broader significance of β-X elimination as an underutilized yet uniquely effective elementary step for cleavage of strong covalent bonds. We completely rewrote the manuscript to emphasize this point. Fortunately, after the makeover the narrative resonated with the reviewers at Nat. Chem., who offered a variety of thoughtful suggestions regarding substrate scope and additional mechanistic studies. One month of revisions, several months of deliberation, and one (successful!) candidacy exam later, we finally heard the official good news and collectively breathed a sigh of relief. Though the journey was onerous and filled with unpredictable obstacles, we were able to overcome each with new lessons learned and eventuallyobtain a refined view of the chemistry. The denouement of this project exemplifies a quote from the novelist Marcel Proust: “The real voyage of discovery consists not in seeking new landscapes, but in having new eyes.” 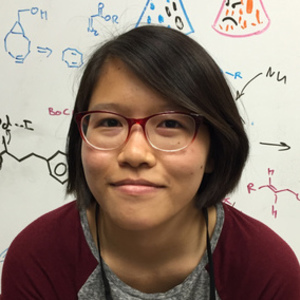