The study of organic conductors is still active for over 60 years since the first report of semi-conducting perylene­bromine complex in 1954, and the vigorous material exploration on charge-transfer complexes and salts unveiled new phenomena and functions. Mixed valence state, wherein there is a plurality of ionization states of elements constituting the compound, is an essential condition for high electrical conductivity, and a π-stacking column provides an effective conduction pathway. However, most of their component molecules are derived from very limited molecular systems such as tetrathiafulvalene (TTF), tetracyanoquinodimethane (TCNQ), dithiolate-type complexes, C60, etc., and the substance exploration is inadequate from the viewpoint of diversity of organic molecular systems.

Organic neutral radicals have been expected to exhibit various electronic and magnetic physical properties such as a high electrical conductivity demonstrated as single-component purely organic molecular system. However, most of previously reported organic neutral radicals such as nitroxide and phenoxyl radicals were insulators (sRT < 10–10 S cm–1), because they do not form sufficient conduction pathway and electronic intermolecular communication due to bulky substituent groups introduced for acquiring stabilization.

Trioxotriangulene (TOT), a polycyclic neutral π-radical with a 25π electronic system, and is quite stable even without steric protection because of a highspin-delocalization over the highly symmetric 25π-electronic molecular system (see: Bull. Chem. Soc. Jpn. 2018). The extended π-electronic system of TOT neutral radicals causes a strong intermolecular SOMO-SOMO and π-π interactions, and gives a high tendency to form a 1D columnar structure in the solid state. Here we have investigated the electrical conductivity of 1D columns of TOT derivatives with various stacking patterns. The columns with a weak π-dimerization and uniform π-stacking exhibited semi-conducting behaviors with conductivities of ~10–3 S cm–1, which are very high as single-component purely organic molecule. The general tendency of TOT in the formation of 1D columns as a conducting pathway strongly encouraged us to prepare mixed valence salts by formally injecting excess electrons into the 1D stacks of TOT neutral radical crystals. As a result, we have achieved a selective synthesis of mixed valence salts of TOT, where neutral radicals and corresponding monoanion species co-exist with 1D columnar π-aggregation structure, and high electrical conductivities of 125 S cm–1 at most.

These results clearly indicate the high ability of TOT as a novel molecular building block for organic conductors, and will provide a new milestone in the material exploration in the development of organic electronic materials. We are also studying the various chemical modifications on TOT skeleton, and have already succeeded in the synthesis many kinds of TOT derivatives. Our current interest is aimed to the exploration of multi-functionality by combining electrical conductivity and other properties such as chirality and photo-response as well as electronic spin of other organic radical and/or transition metal ions.

Our paper “Mixed valence salts based on carbon-centered neutral radical crystals” published in Communications Chemistry can be read from here. 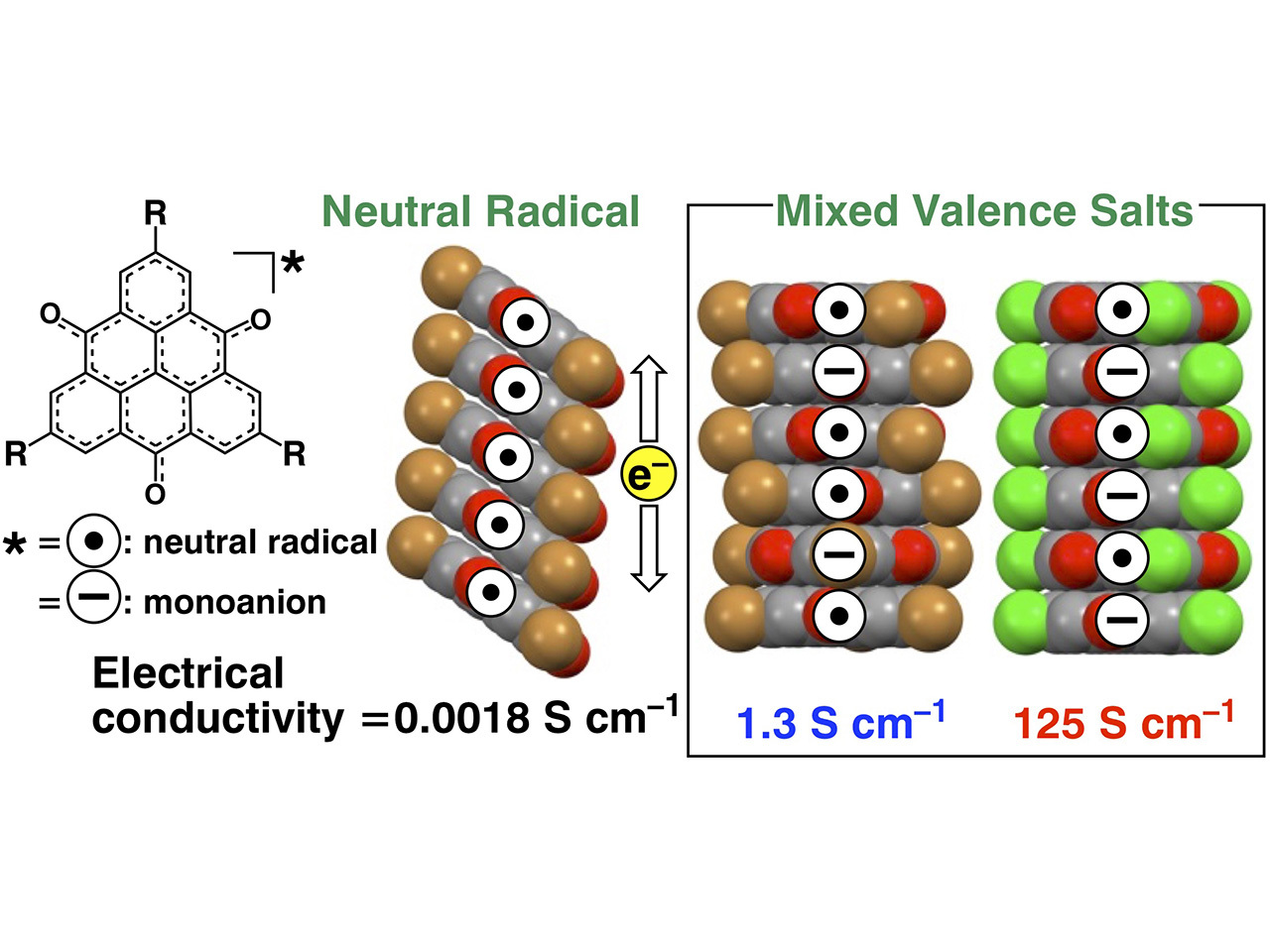