Antibiotic resistance is one of the biggest threats to global health, food security, and development in all parts of the world. In clinical bacterial infections are becoming harder to treat as the antibiotics used to treat them become less effective. Therefore, it is urgent to develop novel antimicrobial strategy or materials to kill bacteria efficiently. Our laboratory focuses on using nanozymes to kill resistant bacteria and related biofilms. Nanozymes are nanomaterials with intrinsic enzyme-like activities which regulate reactive oxygen species (ROS) by catalyzing redox reactions. Iron oxide nanoparticles are one of the typical nanozymes which have peroxidase-like and catalase-like activities. Our previous work has found that iron oxide nanozymes in combination with hydrogen peroxide have high efficacy in suppressing resistant bacteria and disrupting biofilm. We usually prepare iron oxide nanozymes using a solvothermal reaction containing iron chloride, sodium acetate and ethylene glycol. Addition of organic polymers is used to optimize the catalytic activity, dispersibility or biocompatibility. We have found that adding amino acids, such as histidine or cysteine, in the solvothermal reaction can significantly improve the catalytic performance of iron oxide nanozymes. Especially, cysteine is a precursor of many organosulfur compounds, such as diallyl disulfide (DADS), diallyl trisulfide (DATS) and diallyl sulfide (DAS) which are assumed the effective antibacterial constituents in garlic extracts. When we added cysteine and the above garlic-derived organosulfur compounds into the solvothermal reaction, we unexpectedly found that nano-iron sulfide (nFeS) nanosheets rather than iron oxide nanoparticles were formed in the final products.

In the antibacterial test, we found that compared with iron oxide nanozymes or the precursors of organosulfur compounds, nFeS its own shows dramatically enhanced bacterial killing efficiency. This is an unexpected property and we are very curious why nFeS itself can inhibit bacterial viability. We observed that nFeS solution became yellow after long time incubation. The precipitate consisted of byproducts in nanoparticles rather than nanosheets. Interestingly, the supernatant of the solution possesses high antibacterial activity and such activity can by terminated by tris(2-carboxyethyl)phosphine hydrochloride (TCEP) which is often used to reduce disulfide. These result remind us that there may be some sulfur products released by nFeS accompanying the color change and nanostructure transformation. To address this assumption, we find a collaborator, Dr. Xinggui Shen, who focuses on sulfur biochemistry at Louisiana State University Health Sciences Center, Shreveport, LA. We identified that hydrogen disulfide and hydrogen trisulfide are the dominant components released from nFeS in aqueous solution. Therefore, these hydrogen polysulfides may play the critical role in antibacterial activity.

These results indicate that nFeS may be used as an antimicrobial alternative to tackle the challenge of bacteria which have heavy resistance in clinics. The release of hydrogen polysulfides by nanosulfides may present a new mechanism in antibacterial treatment. Our current interest is aimed to reveal the exact antibacterial property of nFeS and polysulfide and develop the regimen for translational and clinical applications in the treatment of bacterial infections.

Our paper “Converting organosulfur compounds to inorganic polysulfides against resistant bacterial infections” published in Nature Communications can be read from here. 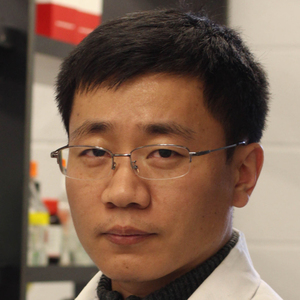