To image a chemical reaction in “real-time” and at the atomic level is not something one can usually hope for. Chemical reactions are way too fast and “messy” for our tools capable of atomic resolution, such as scanning tunneling microscopy (STM). The typical image acquisition rate of an STM is of order of minutes and the atomic resolution usually requires atomically clean and flat samples. However, in our work reported in Nature Chemistry we were able to follow at the single-atom level the oxidation of MoS2 single layers by STM.
Levente Tapaszto
Head of Department, Hungarian Academy of Sciences - Centre for Energy Research
Follow
Liked by Stu Cantrill

When you take a look at one of your older samples, usually two things happen: (1) nothing has changed, which does not provide you with new information, or (2) everything has changed, which is too difficult to interpret. However, on the rare occasions when the right amount of change occurred to the sample, you have a chance to understand what is going on. This was the fortunate case of our MoS2 single layer sample sitting in a drawer for months. Since the basal plane of MoS2 crystals is widely regarded as environmentally stable, we definitely expected the first scenario, namely that the sample will look just as we left it. However, when acquiring atomic resolution STM images, we noticed a significantly increased point defect density, as compared to freshly prepared samples. After one year a 10 x 10 nm2 sample area displayed more than a hundred point defects as opposed to a couple of defects in the freshly exfoliated samples. Then it became entirely clear that the ambient exposure is capable of inducing new structural defects in the pristine basal plane of MoS2 single layers. These point defects were identified as oxygen atoms replacing individual sulfur atoms in the MoS2 crystal lattice. The resulting material was no longer MoS2 but a new solid solution crystal with the formula of MoS2-xOx, which still preserved the original MoS2 crystal structure. Previous attempts to synthesize the molybdenum oxy-sulfide phase resulted in amorphous or highly disordered structures. We have shown that 2D MoS2 crystals can be chemically transformed into molybdenum oxy-sulfide, while fully preserving their long range crystalline order. In fact, this transformation spontaneously occurs upon ambient exposure on months-long time scale.The chemical transformation of MoS2 under ambient exposure happens through an oxidation reaction upon which individual oxygen atoms one-by-one replace single S atoms of the MoS2 lattice.

The best catalyst for hydrogen evolution is platinum. However, the development of cheaper alternatives is highly desirable for industrial applications. Since MoS2 is already intensely investigated as a promising catalyst, we have measured how the chemical doping of the MoS2 basal plane by O atoms influences their catalytic activity. We found that the 2D MoS2-xOx samples display a substantially increased catalytic activity as compared to pure MoS2. By directly imaging their atomic structure, we could clearly identify the O substitution sites as the source of the increased catalytic activity. However, it was not easy to understand how such O sites can be efficient in catalyzing H2 evolution. The Gibbs free energy (GH) is often used as a predictive parameter for the catalytic activity. It can be perceived as characterizing the adsorption strength of H atoms to the catalytic site. A value close to zero is desirable (neither too strong, nor too weak adsorption), as during the catalytic process H atoms have to both adsorb and desorp from the catalytic site. The pristine basal plane of MoS2 has a GH value of about 2eV, which tells us that H does not like to adsorb on it (hence its inactivity). We calculated the GH of O substitution sites to be about 1 eV, which means that H species are much more likely to adsorb on O substitution sites, but still not likely enough to explain the observed catalytic efficiency. So we proposed an additional process that might facilitate the catalysis. Namely, the GH value does not take into account the electrical charge potentially present on the catalytic site. It is known that O is more electronegative than sulfur. According to our calculations a significant surplus of negative charge (of about -0.4 e-) is localized on the O substitution sites. This charge is only partially screened at the surface, providing an additional driving force to attract the positively charged H species from the electrolyte. Upon reduction (electron transfer), H becomes neutral, switching OFF this electrostatic force, this way facilitating its desorption. We propose that this process (together with the decreased GH value) can explain the observed catalytic activity of single atomic O substitution sites in 2D MoS2-xOx crystals.

Our paper “Spontaneous doping of the basal plane of MoS2 single layers through oxygen substitution under ambient conditions” published in Nature Chemistry can be read from here.

Levente Tapaszto
Head of Department, Hungarian Academy of Sciences - Centre for Energy Research
Follow
Engineering the structure and properties of 2D materials at the atomic scale. 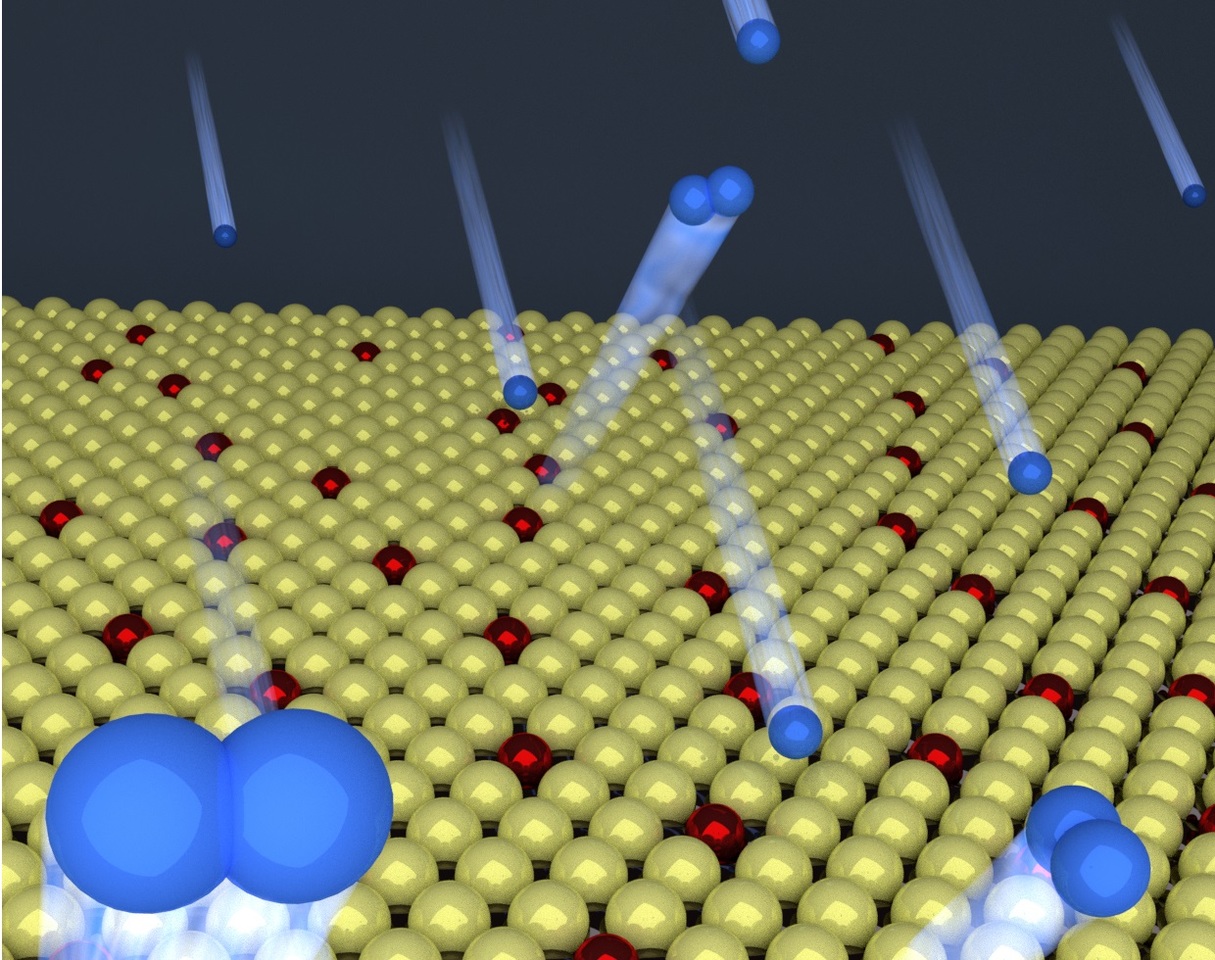 To image a chemical reaction in “real-time” and at the atomic level is not something one can usually hope for. Chemical reactions are way too fast and “messy” for our tools capable of atomic resolution, such as scanning tunneling microscopy (STM). The typical image acquisition rate of an STM is of order of minutes and the atomic resolution usually requires atomically clean and flat samples. However, in our work reported in Nature Chemistry we were able to follow at the single-atom level the oxidation of MoS2 single layers by STM.