Preface: Organic molecules that possess diradical character (diradicaloids) are rather uncommon in the literature, which drives our lab’s intellectual curiosity (and sometimes frustration) in this fascinating field, one that is far from well understood. This area seemingly is still in its infancy and at times the reports of organic diradicals in the literature feel like a random splattering of molecules that wind up possessing diradical character. Sometimes after the first report of a new organic diradicaloid motif, there might be a follow-up paper in which the core length is modified or substituents are varied; however, to date there has been a limited number of systematic studies on how one can incrementally change the diradical character within a family of similar molecules.

The Goal: Much like many of diradicaloids in the literature, diindenoanthracene (DIAn, 6), first reported by our lab in 2016, was serendipitously found to possess diradical character. Advantageously, DIAn provides a platform from which to conduct a systematic study of tailoring the diradical character and other related properties of a family of molecules. To this end, we have been pursuing two complementary strategies for tuning the diradical character. First has been elongating the central core while maintaining the same fused outer ring (e.g., 1/2/3). More recently we have pursued altering the bond order of the fused outer ring while retaining the same core motif (e.g., 1/4, 2/6). In our pursuit of this series of molecules, we prepared indenoindenodibenzothiophene (IIDBT, 5).

The Aha Moment: For the first couple of months of its existence, the IIDBT molecule puzzled us greatly. We knew computationally that it should have a similar diradical character index (y) as DIAn; however, there were major disparities between the 1H NMR data sets of the two molecules. The proton NMR spectrum of IIDBT possessed well-resolved signals, while the spectrum of DIAn clearly showed broadened signals at room temperature. The x-ray structure revealed that the bond from the central core to the apical carbon of the five-membered ring was considerably longer in IIDBT (1.424 Å) than in DIAn (1.406 Å), again suggesting appreciable diradical character in IIDBT. l It wasn’t until late one evening after the weekly group meeting on the indenofluorene project weekly, where my PI and I had stayed behind to discuss these strange results, that I finally asked the question, “Does a compound NEED to have a thermally accessible triplet state to be a diradicaloid?” We both paused and realized that in the literature there were no conclusive examples of molecules with rather large singlet-triplet energy gaps, so it was not an implausible hypothesis.

The Snowball Effect: It was less than a week later when the Nakano group sent us the computational values for the singlet-triplet energy gap, which predicted that IIDBT had an energy gap more than twice that of DIAn. From this point we realized that we needed to gather evidence to support the existence of what we coined a “persistent singlet diradicaloid.” We utilized the available experimental and characterization techniques, as we did not think we could access the triplet state to prove the existence of the diradical resonance form. From these experiments we assembled what we thought was enough circumstantial evidence to convince ourselves and others (such as skeptical reviewers) that we had a diradical compound with a difficult to access triplet state.

There is your Dagger: Even with our solid circumstantial evidence, a reviewer of the initial manuscript was not convinced; thus, we had to prove somehow that we could access the triplet state. The proverbial “nail in the coffin” was provided by our collaborators in Spain. They had recently acquired a SQUID spectrometer with an oven that could to populate and detect the triplet state of molecules in the 400-800 K range. Gratifyingly, the SQUID data revealed that we could indeed access the triplet state starting around 450-475 K, with a clean, well-resolved curve up to 800 K, with the experimental data (–8.0 kcal/mol) agreeing well with the calculated singlet-triplet energy gap (-8.8 kcal/mol).

Why should you care? What our work shows is that it is possible to “tune” the energy barrier to go from singlet to triplet state in diradicaloid compounds, which will be very important for using these types of molecules in potential electronics applications. We are currently working to further exploit this tuning by changing the outer unit from a benzothiophene to other aromatic units to see how much we can incrementally alter the energy gap between the singlet and triplet state. 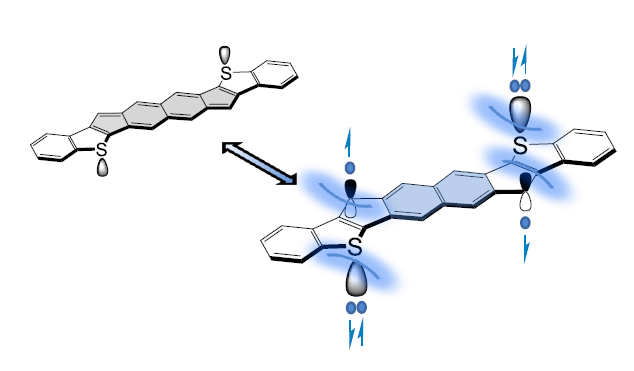