Furthermore, QDs offer optimal properties for artificial photosynthesis: Their high absorption coefficients and scattering effects in colloidal solutions lead to their strong light absorption, while their inorganic cores can be covered and tuned with suitable molecules for enhanced stability and performance in photocatalysis. A series of QDs were reported to present excellent activity and long-term stability in light-driven hydrogen evolution. However, most of these QDs contain toxic cadmium, such as CdSe, CdS and their related hetereostructures, which impedes their environmental applications. While ternary and quaternary QDs, such as CuInS2 and Cu2ZnSnS4, were developed as alternatives, straightforward Cd-free binary QDs for photocatalytic hydrogen evolution remain widely unexplored.

In this work, we thus introduce InP QDs - a close competitor to CdSe QDs for display and bio-related applications - for effective photocatalytic hydrogen evolution. Inspired by recent synthetic strategies towards InP QDs using aminophosphines as phosphorus source, we have successfully obtained a series of InP QDs with different excitonic absorption peaks. We demonstrated that all of them generated hydrogen under AM 1.5 illumination in a photocatalytic assay with ascorbic acid and nickel ions. Moreover, we have eliminated defects in the InP QDs through adding ZnS to their surface, which notably improved the efficiency of this hydrogen evolution system. According turnover numbers based on QDs were increased to 128,000, with a maximum internal quantum yield of 31 % (525 nm). These results identify InP QDs as competitive alternatives to CdSe QDs in artificial photosynthesis.

Figure 1. Ligand exchange and tunable optical properties of InP/ZnS QDs (a, c) with high activity in photocatalytic hydrogen evolution (b).

Benefitting from the facile surface tuning options of QDs, we systematically investigated a series of InP/ZnS QDs modified with a variety of organic and inorganic ligands, and we discovered that QDs decorated with inorganic sulfide ligands significantly outperformed those with other ligands. Our mechanistic studies demonstrate that sulfide ions on the QD surface can act as an efficient relay between QDs and ascorbic acid as electron donor, which promotes the separation of excitons and therefore the subsequent catalytic process.

Our work paves the way towards Cd-free InP QDs as promising players in the field of artificial photosynthesis, with the potential to challenge the long-standing monopoly of Cd-based QD materials. Further sustainable catalytic applications of eco-friendly InP QDs are now on the horizon. 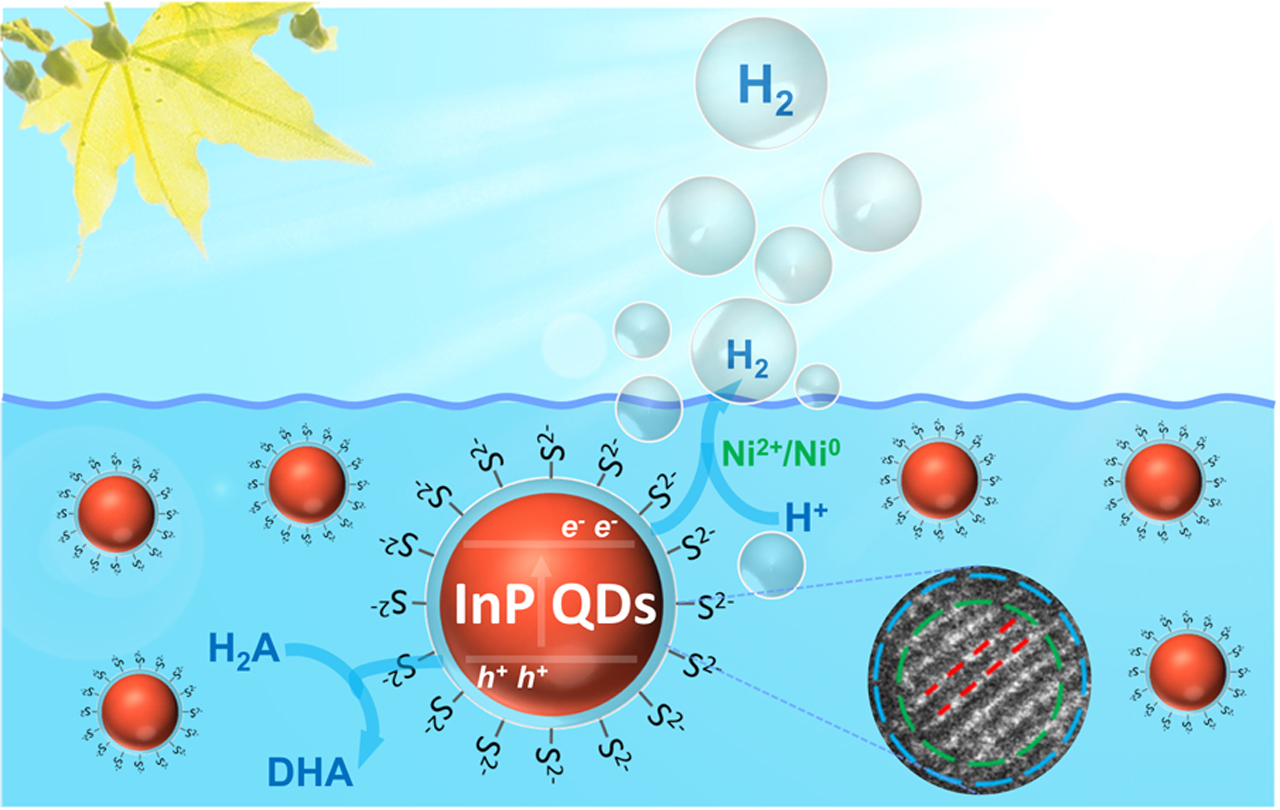