Menu
A community from Nature Research
Regular Contributor
Behind the paper

We show the radical polymerization of vinyl monomers via their translocation through a single layer graphene to a monolayer initiator and additionally study the monomer-graphene interactions.

The corresponding paper in Nature Communication is

Despite numerous theoretical predictions presented in literature, experimental evidence for real molecule though graphene is rather scarce. In most of the cases, experimental studies are limited to transport of water or gas molecules or ionic transport under concentration gradient. In this work, we experimentally show that vinyl monomers of various sizes are able to pass though monolayer CVD graphene under the driven force of radical initiator in polymerization, and the translocation process is more charge selective than size selective.

The work is a chapter of my PhD thesis (submitted in 2015, TU Dresden), and the idea is actually originated in about six years ago when I eventually read two excellent papers (Nat. Mater. 11, 217, 2012); Nat. Chem. 4, 724, 2012), which sequentially demonstrate that monolayer graphene is rather transparent to van der Waals and Coulomb forces. Due to my background of polymer chemistry, the results of these two papers inspired me with an idea that monolayer graphene may not affect the interaction between radical initiator and monomer in radical polymerization. And surface-initiated polymerization (SIP) is a perfect platform to test this idea, since the initiator is covalently bonded to solid substrate, meanwhile monomers can be added continuously to the initiator to form polymer brushe during the polymerization. In the first experiment, a self-assembled monolayer (SAM) radical initiator on SiO2/Si wafer was covered with a monolayer CVD graphene, and the specimen was subjected to a typical monomer (methacrylate, MMA) solution for SIP in 1 h (Polym. Chem. 6, 2726, 2015). If the Coulomb force between monomer and radical initiator could really ‘see’ through monolayer graphene, we would other see the translocation of monomers through graphene and polymer brush formed under graphene, or the monomers are too large/inactive to pass through graphene but polymer brush could be formed on the surface of graphene since the monomers can be activated anyway. It is truly exciting to see any of the two phenomena!

Fortunately, we observed that polymethacrylate (PMMA) brush was well formed underlying monolayer graphene, which means MMA are able to smoothly pass though monolayer CVD graphene under the driven force of radical initiator in polymerization, although the native defects of graphene are largely increased due to the translocation. In contrast, the passage of charged monomers is severely interrupted by the graphene, since we saw a strongly interrupted polymer brush growth. Also, interestingly, the translocation of anionic monomers selectively cuts graphene into congruent microscopic patterns (see the Figure). These results indicate that the translocation of large molecule through monolayer CVD graphene can be realized by apply an external driven force to the molecule, and the charge of the molecule has a greater impact on the translocation than the molecule size.

Lastly, I would say that the concept proved by this work is more than important than the result itself. 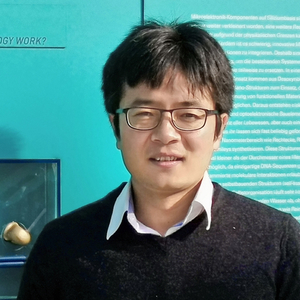