A tiny curiosity brought us to an encounter with molecular threading.​
Michito Yoshizawa
Associate Professor, Tokyo Institute of Technology
Follow
Like Be the first to like this
0

We often begin research projects from tiny curiosities. As regards this article, our initial interest was to find out additives to simply increase the solubility of our capsule. No useful additive was found in this project but we happened to encounter unusual nanostructures.

In 2011, we published our first molecular capsule in JACS from the present research group at Tokyo Tech. The capsule has a hydrophobic shell comprising eight anthracene panels so that the solubility in water is quite low despite its eight methoxyethoxy side-chains. Increasing the number of the hydrophilic side-chains (total 12 groups) on the shell enhanced the water solubility of the polyaromatic capsule. This allowed us to observe the intriguing host abilities, e.g., toward AIBN, BODIPY, sulfur clusters, and sucrose in aqueous solution. To further improve the solubility, we attempted to use commercially available polyethylene glycol (PEG) (~400 in average molecular weight), known as chemically inactive, biologically friendly, and highly hydrophilic oligomers, not as long side-chains but as a simple additive. Contrary to our expectation, the additive did not increase the water solubility yet was quickly bound by the capsule in water at room temperature! This surprising finding prompted us to investigate the detailed host-guest interactions.

Our first question was up to which length PEG molecules are bound by the capsule? NMR and MS analyses clearly answered that PEGs ranging from tetramer to octamer (up to ~3 nm in length) are fully crammed into the ~1 nm cavity of the capsule. We fortunately obtained the crystal structure of the capsule accommodating one molecule of the pentamer, which indicates the presence of multiple host-guest CH-pi and hydrogen-bonding interactions in the discrete nanospace. Then, the second question was raised: what kind of host-guest composites are formed from longer PEGs and our capsule? Simple mixing of the decamer (~4 nm in length) with the capsule led to the formation of a threaded 1:1 host-guest structure in water at room temperature. Due to the volume overload, both sides of the long PEG chain stuck out of the polyaromatic shell.

To our second surprise, longer PEGs (e.g., 22-mer and 44-mer) were threaded into the capsules to form 2:1 host-guest structures! The broadened and upfield-shifted NMR signals of the bound guest were indicative of the shuttling motion of the two capsules along the long PEG chains (e.g., ~9 and ~18 nm in extended length). The detailed, host-guest thermodynamic parameters were estimated by ITC analysis.

As our future perspective, the use of polyaromatic capsules bearing functional side-chains would facilitate the creation of novel pseudo-rotaxane-type polymers and the threading of biopolymers into the functionalized capsules could develop new hybrid materials.

The details are described in “M. Yamashina et al., Cramming versus threading of long amphiphilic oligomers into a polyaromatic capsule” in Nat. Commun. 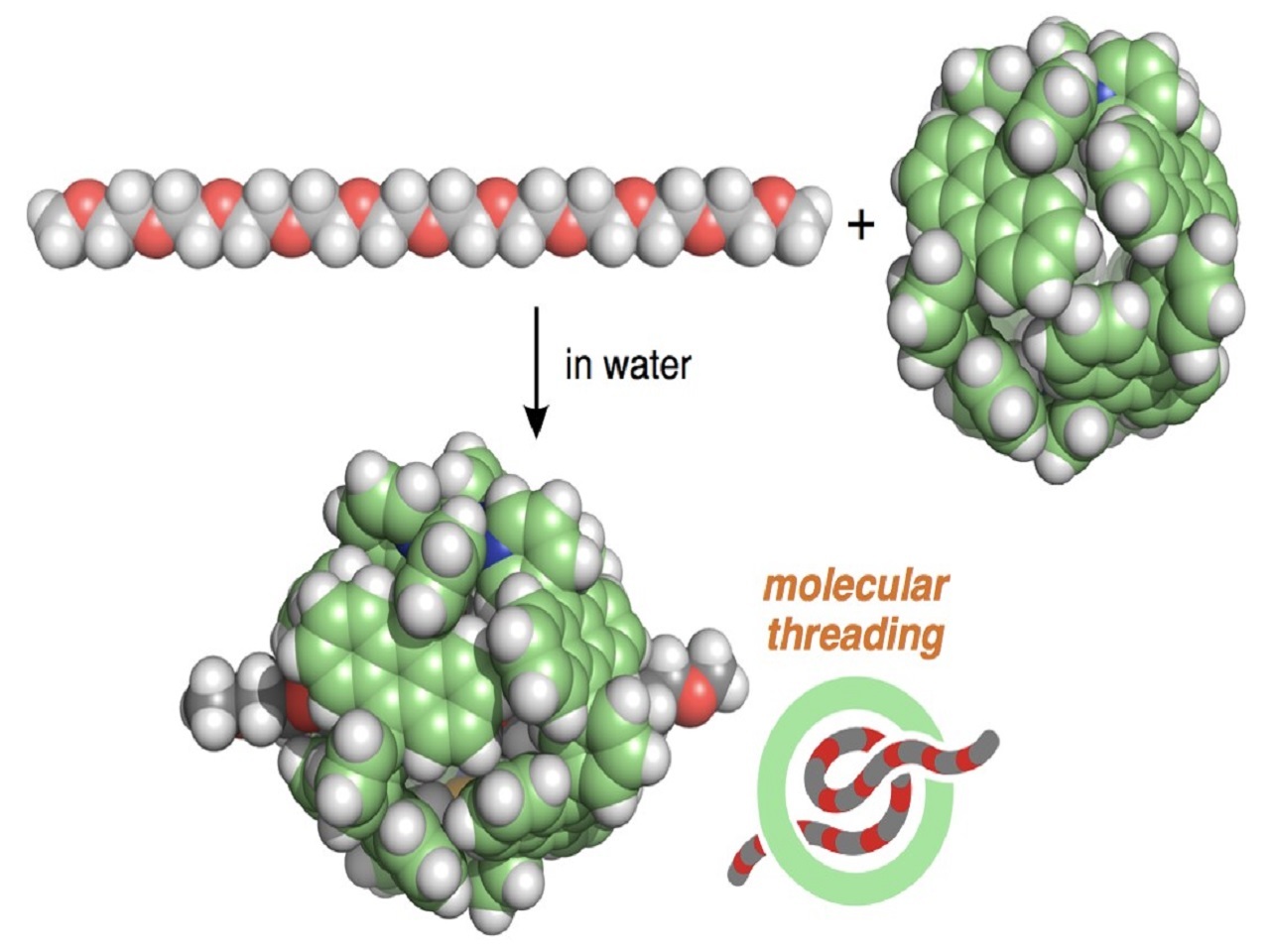 A tiny curiosity brought us to an encounter with molecular threading.​