Plastics hardly combine luminescence with stability in one material. Luminescent plastic is usually unstable while stable plastic is less emissive. Making a plastic to be luminescent and stable requires the presence of luminescent segments in a robust polymer. However, luminescent components are photosensitive and tend to degrade if exposed to light. This is because light absorption will ‘pump’ the luminescent part to a photoexcited state at a high energy level, which in addition to emitting luminescence, can trigger various undesirable processes. For example, it forms radical – a highly active species – that steadily destroys the emissive segment itself as well as the polymer chain. Significant progress in design and synthesis over the past decades have enabled the construction of various photoluminescent plastics by which different emission colors from blue to green, red and white can be designed and finely tuned. However, the stability issue remains challenging.

In contrast to traditional luminescent plastics that basically have a linear or one-dimensional chain structure, we topologically designed a two-dimensional (2D) porous tetragonal network that enables the polymer backbones to grow along both the x and y directions and to be interwoven periodically at knots. The network was made from all sp2 carbon units by connecting luminescent pyrene knots along four directions with emissive linear arylenevinylene linkers to constitute a fully π conjugated sp2 carbon covalent organic frameworks (sp2c-COFs, Figure). Moreover, to each linker, two nitrile units were introduced as side groups so that through the extended 2D π conjugation, the network greatly increased its anti-radical and also anti-oxidation capabilities.

Interestingly, sp2c-COFs are exceptionally stable to retain their chemical structures, porosity as well as luminescence properties upon exposure to air under light for even one year. Moreover, these 2D frameworks have a high resistance to strong acid (concentrated HCl) and base (14 M NaOH) without showing any changes in structure and luminescence.

The topology-directed design enables the construction of a series of robust sp2c-COFs by tuning the length of arylenevinylene linkers while keeping the pyrene knot. In these sp2c-COFs, the pyrene knots are known as excimer emissive while arylenevinylene linkers are aggregation-induced light-emitting units. In the layered frameworks, the linkers dominate the π conjugation so that various different emission colors can be produced, and controlled the luminescence quantum yields. In the exfoliated nanosheets, the knots play a key role in determining the luminescence quantum yield and color. These different mechanisms found in the 2D luminescent plastics render both the nanosheet (isolated) and layered framework (aggregated) highly emissive. In contrast, most linear polymers are only luminescent at either the isolated or aggregated state. 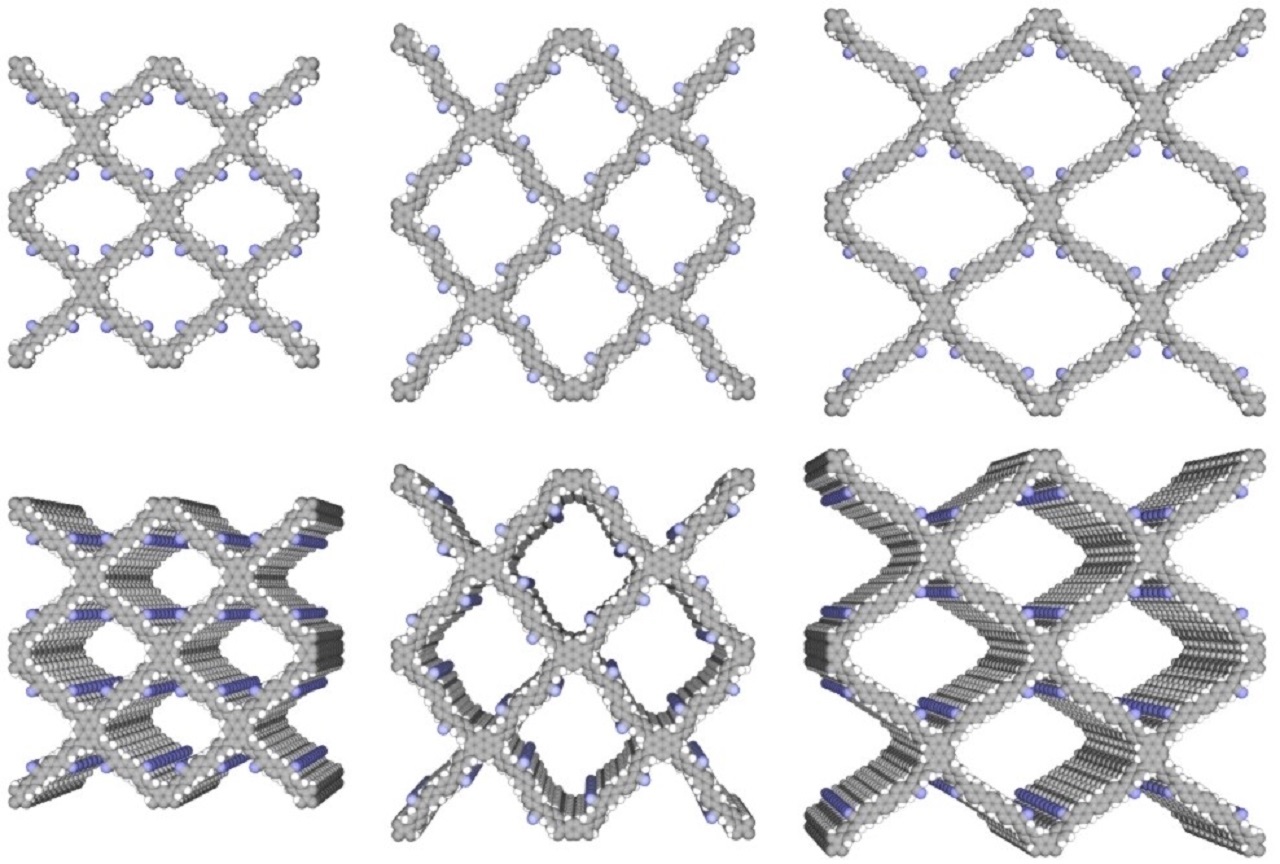