Chemical data storage? In the future a little powder should suffice

Bank accounts, YouTube videos and QR codes: all things we use daily and we store on a computer as zeros and ones, or binary data. Humanity has been collecting ever more data over the last decade, yet the storage media available to us now might not be able to cope with this exponentially rising demand. With DNA, nature has found a way to effectively store and transcribe genetic information. The possibility of using DNA has been explored by scientists as an alternative for storing data, but practical limitations have popped up in the process, such as the limited availability of the building blocks and the complexity of the structure. To counter these disadvantages, chemists have been trying in recent years to store data on synthetic sequence-defined macromolecules.

When I joined Professor Filip Du Prez’ research group five years ago and started my own research on precision polymers, making use of sequence-defined chemistry, I never imagined becoming part of an interdisciplinary research project for which I’d have to store sentences and QR codes on molecules, nor did I suspect I’d be working together with the biochemistry and informatics departments of Ghent University. The success of this interdisciplinary research not only depended on the skills of my own research group, headed by Professor Du Prez, but also on the expertise of his colleagues Bart Devreese and Peter Dawyndt. I spent the first years of my PhD optimizing and automating the sequence-defined protocol and expanding the monomer alphabet. As soon as this was done, we were able to write the different oligomers containing the words of the sentence or pieces of a QR code. Professor Devreese contributed by helping us out with both his expertise in mass spectrometry and his MALDI-MS/MS equipment, which allowed for the easy read-out of the information encoded on the oligomers. As the analysis of the mass data obtained is very time-consuming, Professor Peter Dawyndt, expert in bio-informatics, created an algorithm which made it possible to reduce the analysis time to only a few seconds and to automatically process this data (Chemreader). A second algorithm (Chemcoder) was developed to help me translate a QR code which leads to the Wikipedia page of August Kekulé to a series of 71 different sequence-defined macromolecules and vice versa.

The published work is the result of a truly interdisciplinary team effort that led to beautiful research. Once again, it shows that us scientists should sometimes step out of our comfort zone and expand our horizons. Our research has been published in Nature Communications; you can read it here https://www.nature.com/articles/s41467-018-06926-3. 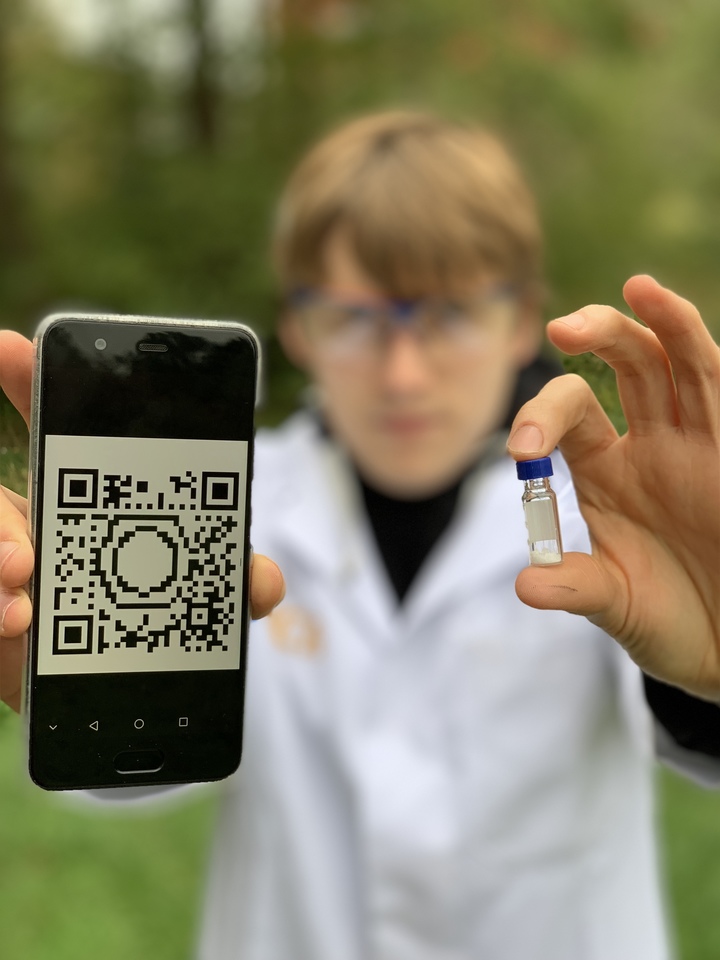 Chemical data storage? In the future a little powder should suffice