Glycerol is an abundant byproduct of the biofuel industry which holds promise as a platform chemical. Here glycerol is converted to value-added chemicals of varying degrees of reduction using thermostable multi-enzyme cascades.

L-Serine is an important amino acid that has expanding applications in industry and fast-growing market demand. However, it is difficult to produce L-serine with a high yield through microbial fermentation. The primary motivation of my project was to develop a biological system for L-serine production from renewable feedstocks.

Therefore, I turned to produce L-serine through other biosynthetic pathways. I found that L-serine can also be produced from D-glycerate through the reactions catalyzed by NAD-dependent glyoxylate/hydroxypyruvate reductase and L-alanine dehydrogenase. D-Glycerate can be produced from glycerol by the FAD dependent alditol oxidase-catalyzed two-step oxidation reaction. This biosynthetic pathway excludes the D-2-hydroxyglutarate production and the theoretical yield of L-serine from glycerol is 1 mol/mol. Using an artificial enzymatic reaction cascade constructed by alditol oxidase, catalase, glyoxylate/hydroxypyruvate reductase and L-alanine dehydrogenase, glycerol can be converted into L-serine with a carbon yield of 0.71 mol/mol.

Glycerol is an unavoidable byproduct during the manufacturing of biofuel. Biotransformation of glycerol into value-added compounds is of significant importance for the development of the biodiesel industry and environmental protection. Then, I also constructed two other artificial enzymatic reaction cascades for production of value-added compounds (Fig. 1). D-Glycerate produced from glycerol can be catalyzed into pyruvate, a central intermediate in numerous biochemical reactions, through dihydroxy acid dehydratase. Then, pyruvate produced from glycerol dihydroxy acid dehydratase was transformed into L-tyrosine or optically pure lactate by tyrosine phenol-lyase or lactate dehydrogenase. The coupling of the NADH recycling system was used for the generation of reducing force supporting the optically pure lactate production.

Altogether, we produced L-tyrosine, optically pure lactate and L-serine, three typical value-added compounds with different degrees of reduction, though in vitro enzymatic cascades without demand for reducing power, coupling of the NADH recycling system, and with self-sufficient NADH recycling. As our future perspective, new biocatalysts with high activities and systematic optimization of the reaction conditions may improve the performance and expand the potential applications of these in vitro synthetic systems.

The details are described in “Z Li et al., Production of value-added chemicals from glycerol using in vitro enzymatic cascades” in Communications Chemistry. 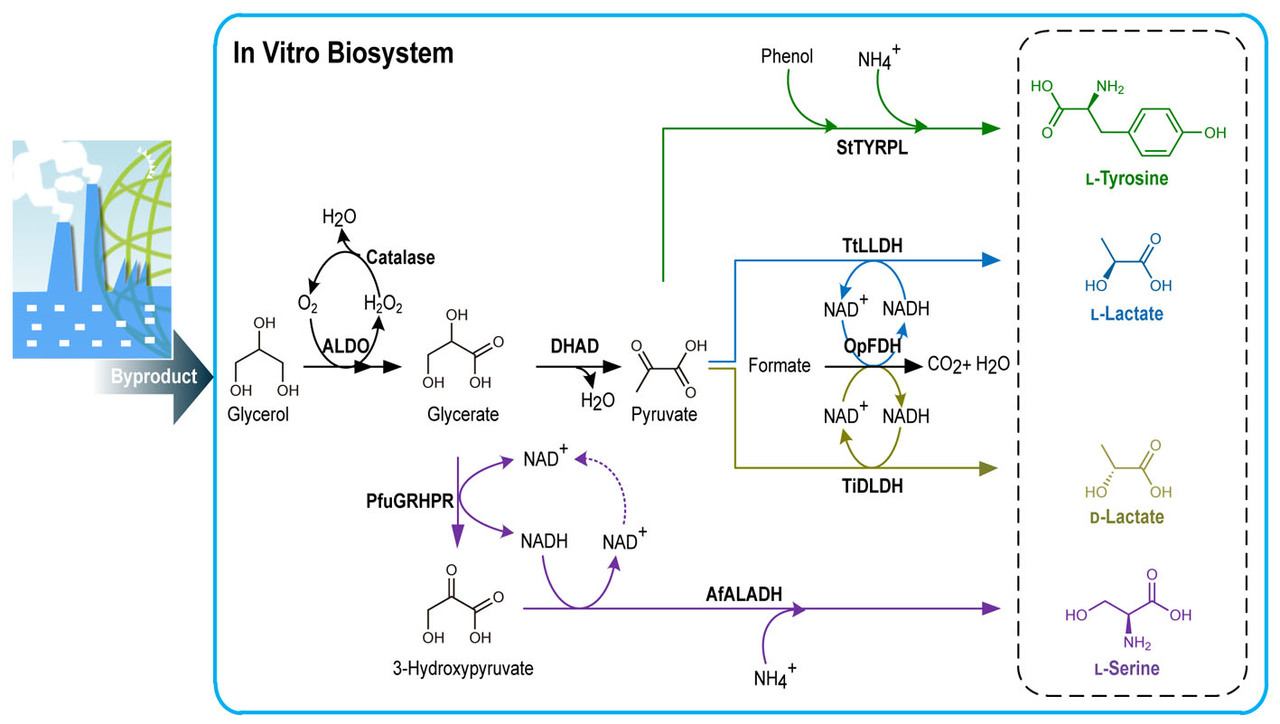