Five minutes in the life of a molecular shuttle

It all started about four years ago. After I presented a talk at our institute (IMDEA Nanoscience), Emilio M. Pérez approached me and said ‘dude, let’s use your optical tweezers to pull on synthetic stuff’.

In the work published in Nature Communications, we have exploited the unique properties of the optical tweezers (2018 Physics Nobel Prize for Arthur Ashkin) to measure and control the picoNewton forces and nanometric displacements governing the dynamics of individual synthetic molecular switches (2016 Chemistry Nobel Prize for Stoddart, Sauvage and Feringa). Moreover, we have done it in water, under bio-compatible conditions. The switch we studied was a molecular shuttle based on a rotaxane, in which a macrocycle (ring) is able to shuttle between two docking stations situated on a molecular axel. These devices are bi-stable, which makes then very attractive as basic components of artificial molecular machinery. However, making the step from molecules to molecular machinery will require an exquisite control of the dynamics and mechano-chemical processes governing the operation of these molecular devices. It was to gather this information that we decided to follow and manipulate the operation of one-shuttle-at-a-time.

Molecular shuttles are complex devices; it took Teresa Naranjo more than two years to synthesize and characterize the molecule from scratch. To interface the shuttle with the optical tweezers we coupled it with DNA, a trick we learned when studying the mechanical strength of host-guest couples.This allowed us to kill not two, but four birds with one stone: DNA helped to solubilize the shuttle in water, was used as a handle to manipulate the ring, as a spacer to separate the shuttle from the beads surface, and to ensure that we were measuring just one molecule. Then, Kateryna M Lemishko went all out to connect, using DNA, a single shuttle between two functionalized beads; one in the optical trap and the other one on top of a micropipette. To our delight, the system turned out to be pretty robust. By moving the pipette away from the optical trap, we pulled on the ring of a single shuttle hundreds of times, and by holding the force constant close to the force value under which the ring has an equal probability of residing in either of the two stations, we monitored its real-time shuttling kinetics during several minutes!. For the first time, we were able to peek into the private life of a molecular shuttle.

Our experiments revealed information about the operation of molecular shuttles that cannot be obtained with bulk techniques: the mechanical strength at each station, the real-time kinetics of shuttling and their respond to mechanical force, and a detailed free-energy landscape of the shuttle-DNA construct. We hope that this technique will be applied to study the operational dynamics of other synthetic molecular devices under near-physiological conditions. In this way, it will be possible to compare directly the operation of artificial and biological motors, which indeed will help in the development of the field of artificial molecular machinery. The work is the result of an interdisciplinary team effort in which we were fortunate enough to have the invaluable help of Dr. Sara de Lorenzo with optical tweezers construction, Dr. Alvaro Somoza with DNA-shuttle coupling and Dr. Felix Ritort with statistical physics. 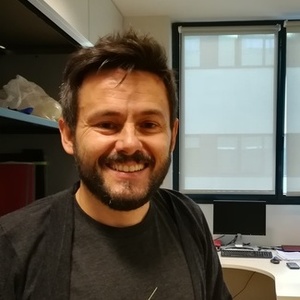