Iron oxides exist in a variety of polymorphs at different pressure and temperature conditions, displaying important magnetic properties, and are major constituents of the Earth’s interior. Here the authors investigate the structural and electronic changes in the uncommon epsilon phase under compress…

The difficulty to access the inner parts of the Earth implies the lack of experimental studies of the minerals and compounds that control its Geodynamical and Geomagnetism. We know that the Earth is mainly formed by magnesium, aluminium, silicon and iron combined with hydrogen and oxygen, then all the studies about materials that contain these elements at the appropriate conditions would pave the path to investigate likely components of the Earth. Nevertheless, these investigations have also turned into the discovery of new metastable materials or the formation of unknown crystalline structures with paramount properties, which lately have been applied in technology. Thus, the different polymorphs of iron trioxide (Fe2O3) have revealed multiferroic properties, biomedical applications or paramount catalytic effects. In particular, the ε-Fe2O3 is a rare polymorph of the iron trioxide, whose structure is only stable when synthesized in nanocrystalline form and exhibited a giant coercitivity (large magnetic properties), biferroic behaviour (being more stable than Bi- and Mn-based materials) and has recently been synthesized in thin films (strong technological applications).

This study started when Dr. Gich approached me at a small conference to tell me about the structure of the ε-Fe2O3. He is a reputed expert in the synthesis and characterization of this material. This is the only phase of the iron trioxide that contains a tetrahedrally coordinated iron (in absence of oxygen vacancies). This discussion led to a question: why was this compound not found in nature? Usually, this phase is considered an intermediate phase between the gamma (maghemite) and the alpha (hematite) iron trioxide but we wanted to define its stability limits.

Then, these discussions were extended to Dr. Monteseguro, Dr. Garbarino, Dr. Cerantola, Dr. Popescu and Dr. Cuartero who found the subject interesting enough to collaborate in this investigation. The first results showed that the structure of the ε-Fe2O3 was stable up to 27 GPa (270000 atm). This pressure is characteristic on the upper part of the Earth’s mantle. Above 27 GPa, we observed a volume collapse that did not correspond to an abrupt change of crystalline ordering. This effect has been also observed in hematite, the most common iron trioxide polymorph, being assigned to a high-spin-to-low-spin transition. This kind of transition consists in a change of the 3d electrons distribution that triggers a structural modification, or vice versa (there is still a strong controversy in the literature). The experimental results were very accurately described by ab-initio theoretical simulations performed by Dr. Monteseguro, which triggered a more detailed analysis of the ongoing processes during the compression.

Thanks to synchrotron-based Mössbauer spectroscopy, the mechanism that dominates the volume collapse observed in ε-Fe2O3 was identified. We assigned this transition to a change of the tetrahedrally coordinated iron towards a quasi-octahedral coordination. This iron, which is close to the centre of the tetrahedral unit at room conditions, starts to shift away with increasing pressure. At 27 GPa, this iron abruptly extends its coordination sphere and reaches other oxygen atoms forming a 5+1 coordination, which implies the formation of a new iron trioxide compound called ε’-phase. This coordination is uncommon in simple compounds but has been observed in more complex materials. Our results report that the final state is compatible with an intermediate-spin, which has been observed in strongly distorted octahedral coordination or penta-coordinated iron. Then, we could conclude that the volume collapse observed is coherent with a HS-to-IS crossover. This is the first time that this kind of transitions have been observed in iron trioxide polymorphs.

It is noteworthy to highlight that this compound was recently discovered as a nanomineral in basaltic rocks, which led to consider that this material is present in the Earth’s interior. Here, we have demonstrated that this structure is experimentally stable up to 27 GPa and dynamically stable up to 27 GPa and 1500K by theoretical predictions. Thus, this material collects all the requirements to be present in Earth’s interior conditions.

This fruitful collaboration between researchers belonging to several Spanish groups and staff from the European Synchrotron Radiation Facility paves the way to complete the picture of iron’s behaviour in different coordination under extreme conditions and proposes that the presence of this material in the Earth’s interior could have been underestimated. 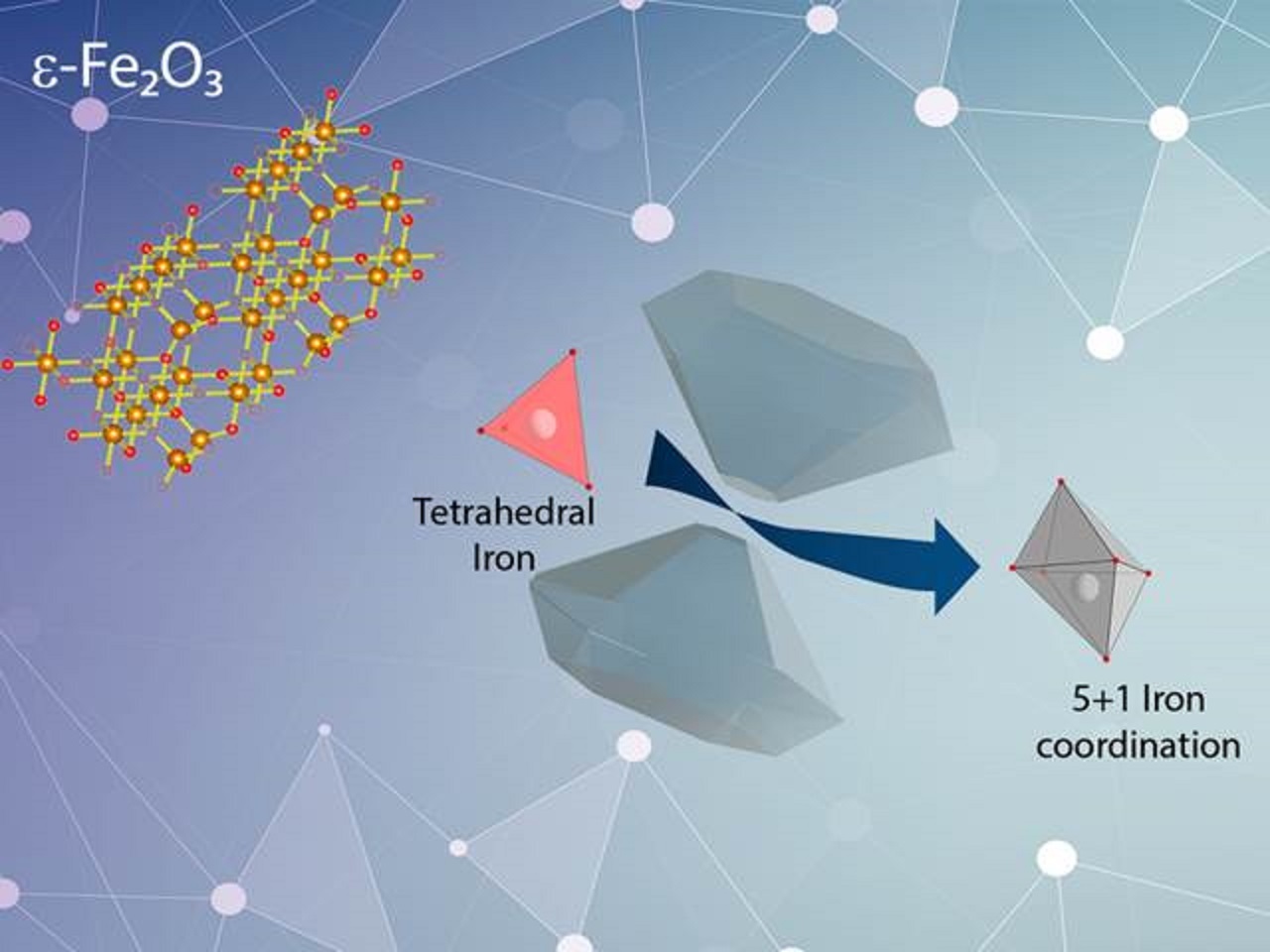