Nitrogen fixation is a biological or industrial process by which the dinitrogen present in air (N2) is converted into ammonia or nitrogen containing compounds. The biological nitrogen fixation is effected by enzymes called nitrogenases and is essential for the biosynthesis of nitrogen-containing compounds, such as amino acids. The industrial production of ammonia from atmospheric nitrogen and hydrogen it is accomplished by the Haber-Bosch process and has led to an increased availability of ammonia, which is of great importance for agriculture. The industrial process has had a huge impact since its discovery and it was estimated that in 2008, 48% of the world population was supported by the use of industrial nitrogen fertilizers.

The Haber-Bosch process uses iron catalysts and requires high temperatures (400 °C) and pressures (20-40 MPa). Because of these harsh conditions, the process consumes about 2% of the world’s annual energy production. Finding a more sustainable process for the production of ammonia and nitrogen containing compounds is a major challenge in modern chemistry.

Before the less expensive iron-based catalyst was discovered, Haber noted, as emphasized in the first patent from 1909, how uranium and more specifically uranium nitrides were highly efficient catalysts for the production of ammonia. Considering the large availability of uranium-238 (with a very low radioactivity) recovered from spent nuclear fuel, uranium makes an attractive candidate for the development of novel and more effective catalysts.

Finding new routes towards uranium catalysts for the production of ammonia from dinitrogen would provide a smart and sustainable usage of uranium-238.

We recently reported in an article in Nature (Nature 547, 332-335, (2017)) a novel approach for the synthesis of a polymetallic uranium complex designed to achieve dinitrogen binding and reduction in ambient conditions. In this approach, a simple nitrogen atom (N3- or nitride) was used as a linker to keep together two uranium atoms in low oxidation state. By using a nitrogen atom as a linker together with a flexible ligand framework, the two uranium atoms are able to bind dinitrogen and transfer the four electrons necessary to reduce the dinitrogen triple bond to a N-N single bond. The complete cleavage of dinitrogen was then effected by addition of hydrogen (H2) and protons, leading to ammonia formation. Unfortunately, the nitride does not act as a spectator in the reactivity with hydrogen and protons, inhibiting the possibility to obtain catalytic activity. Thus, we thought of using a different linker atom in order to unveil how the nature of the linker influences the reduction and the activation of dinitrogen. When an oxygen atom (O2- or oxide) is used as a linker to keep the low valent uranium atoms together in an analogous ligand framework, dinitrogen is still reduced by four electrons. However, the bound dinitrogen could not be further transformed into ammonia by addition of hydrogen and proton. In both nitride and oxide compounds, the bound dinitrogen can also be cleaved by the addition of carbon monoxide leading to new nitrogen containing products. The obtained products are different for the oxide- (cyanamide) and the nitride- (cyanate) linked compounds. We performed computational studies that suggest that such differences arise from the different nature of the bond between the uranium and the linker atom. Studies of the frontier orbitals overlap for the synthetized compounds before and after addition of dinitrogen showed that the nitride is involved in the nitrogen reduction while the oxo is acting as a spectator. Moreover, the activation of dinitrogen in the oxo compound is less pronounced with respect to the nitride, clarifying why the former does not lead to the formation of ammonia. These results clearly show that dinitrogen fixation can be performed in a controlled manner in ambient conditions by molecular multimetallic complexes but that small changes in the structure of the polymetallic complex lead to important differences in the reduction and further functionalization of dinitrogen. Further analyses of linker effects in polymetallic complexes appear essential for the future development of molecular catalysts that can operate under sustainable low energy conditions. Since oxide and nitride are common heterogeneous catalysts, this study is also of relevance in the development of more efficient heterogeneous catalysts for the conversion of dinitrogen into ammonia and other nitrogen containing products. 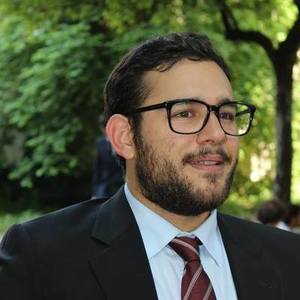