Hybrid perovskites are highly promising for photovoltaic applications, but they are prone to decomposition. Here, the authors probe the stability of CH3NH3PbI3 films in a transmission electron microscope, defining the threshold conditions to avoid damage under the electron beam, and describing a decomposition pathway.
Peng Gao
Professor, Peking University
Follow
Like Be the first to like this
0

Hybrid perovskites are highly promising for photovoltaic applications, but they are prone to decomposition. Here, the authors probe the stability of CH3NH3PbI3 films in a transmission electron microscope, defining the threshold conditions to avoid damage under the electron beam, and describing a dec…

Organic-inorganic hybrid perovskites (CH3NH3PbI3, MAPbI3) are promising candidates for the next-generation solar cells due to their low synthesis cost and rapid increase of device power conversion efficiency from initial 3.8% to most recent 23.3% in less than one decade. However, the commercialization of this technology remains hindered by the stability issues.

Under high temperature, oxygen, moisture and UV light illumination, MAPbI3 decomposes into PbI2, causing poor long-term stability. Moreover, these materials are also sensitive to the electron beam illumination, making the atomically resolved imaging elusive. Examining previous electron diffraction (ED) data on these materials shows that the experimental ED patterns do not really match those of a perfect tetragonal perovskite phase, though such difference is often ignored in the analysis.

In our recent paper in Nature Communications, we probed the stability of MAPbI3 single crystal films, and revealed a decomposition pathway by transmission electron microscopy under a very low dose rate. We also identified the threshold conditions to avoid damage under the electron beam, leaving sufficient time to acquire correct ED data. This work was carried out at Peking University, in collaboration with Shijiazhuang Tiedao University, among others, wherein we focus on the structures as well as mechanisms of organic-inorganic hybrid perovskites using high quality single crystal film.

We find MAPbI3 is easy to decompose into PbI2 accompanied by subtle changes in ED pattern under electron beam illumination, and previous studies often incorrectly identified PbI2 to be MAPbI3 without noticing the subtle ED difference. Based on the atomic structure and the ED patterns, we pointed out the difference between MAPbI3 and PbI2 in detail. Particularly, if we can only observe {2h, 2k, 0} diffraction spots along the [001] direction while the {2h+1, 2k+1, 0} reflections [e.g., (110)] are absent, it is highly likely that the perovskite structure has already decomposed into PbI2.

The decomposition of MAPbI3 is likely initiated with the loss of I ions to form intermediate MAPbI2.5, followed by the loss of MA and additional I ions to form MAyPbI2.5-z (0≤y≤1 and 0≤z≤0.5), and finally decomposes into PbI2. Typically, under electron beam illumination with dose rate 0.5 e Å-2 s-1, MAPbI3 starts to change into MAPbI2.5 after 303 s, while higher dose rate results in faster decomposition under similar total dose. These identified conditions can be used to guide future electron microscopy characterization of these materials.

Our findings impose important question on the interpretation of experimental data based on electron diffraction and highlight the need to circumvent material decomposition in future electron microscopy studies. The paper in Nature Communication is here: https://www.nature.com/articles/s41467-018-07177-y and our related studies on single crystalline film of MAPbI3 can be found in Sci Bull 2017, 62: 1173–1176 and npj Quantum Materials 2018, 3(1): 30. 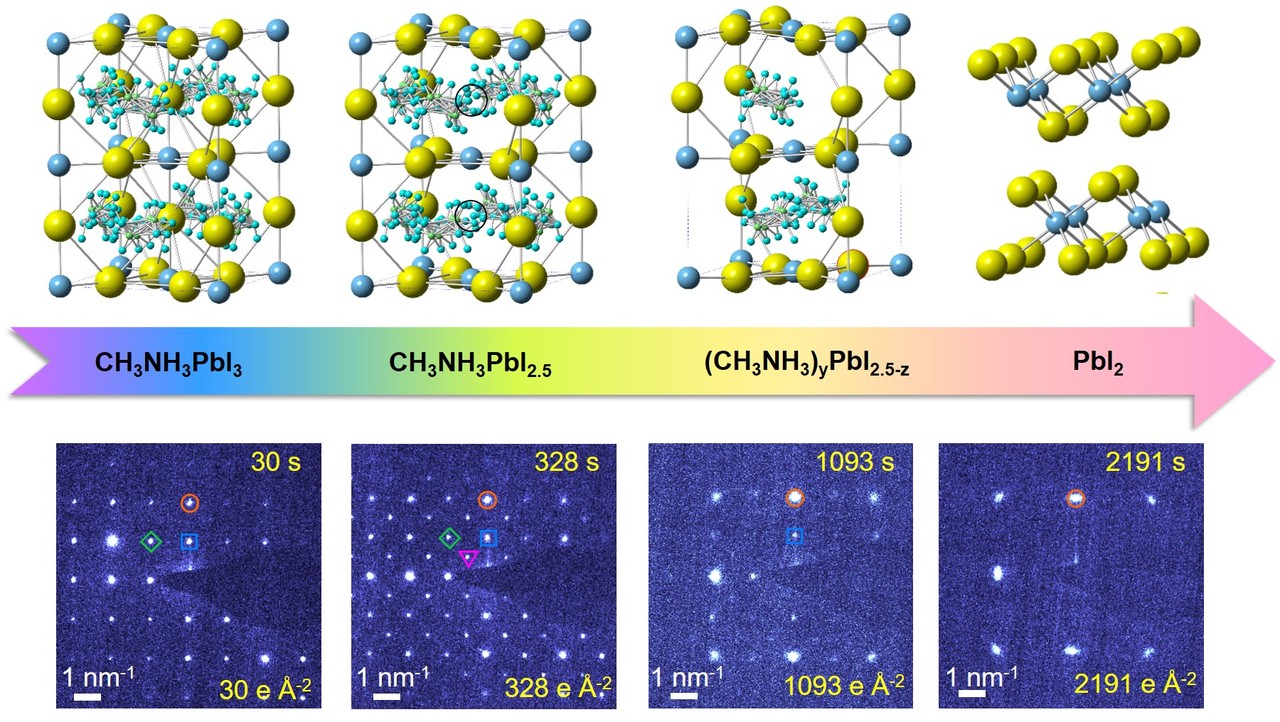 Hybrid perovskites are highly promising for photovoltaic applications, but they are prone to decomposition. Here, the authors probe the stability of CH3NH3PbI3 films in a transmission electron microscope, defining the threshold conditions to avoid damage under the electron beam, and describing a decomposition pathway.