Design of an inherently-stable water oxidation catalyst, or "How I learned to stop worrying and to love the bomb"

We recently discovered (Angew. Chem. Int. Ed.) that redox-active polyoxometalate cluster anions (POMs) can serve as covalently attached ligands for anatase-TiO2 cores, resulting in isolable, water-soluble nanostructures uniquely positioned between molecular macroanions and more traditional, electrostatically-stabilized colloidal metal oxides. This discovery suggested that POMs might serve as covalently attached ligands for a variety of metal-oxide nanocrystals (NCs). Unlike common organic ligands, many POMs are reversible electron acceptors, with tunable redox potentials and other properties. If correct, we speculated that POM ligands might rationally control the reactivities of “metal-oxide cores” in much that same fashion as ligands control “metal centers” in coordination and organometallic complexes.

This was the status of our work in this area when Dr. Biswarup Chakraborty (Ph.D. from the Indian Association for the Cultivation of Science, Kolkata) joined my group. His task was to explore this new chemistry. One of the first things he tried was to simply let iron sulfate sit in water overnight under air, to give colloidal Fe(O)OH, and to then react this at elevated temperature with a polyoxometalate (POM) cluster anion, designed to form covalent bond to Fe(III) atoms at the surface of iron-oxide nanocrystals. To his surprise, this worked the first time he attempted it, and gave a beautiful orange solution that, after extensive analytical work, was found to indeed contain POM complexes of ca. 2.5-nm diameter hematite (alpha-Fe(III) oxide nanocrystals.

This development suggested to us an answer to a challenging issue facing the design of soluble water-oxidation catalysts. While molecular water-oxidation catalysts feature rapid turnover rates, they are inevitably susceptible to degradation under turnover conditions in water. Metallo-organic catalysts are susceptible to oxidation (of their organic ligands), as well as to hydrolysis, while oxidatively-inert polyoxometalate complexes are susceptible to hydrolysis. The degradation processes lead to the formation of reactive colloidal metal oxides whose roles in investigations of molecular catalysts are an ongoing, and often-times heated topic of discussion in the community.

With Biswarup's new material, we were able to address this head on by "embracing" (so to speak; hence the subtitle to this Blog post) a reactive colloidal metal oxide itself—in this case, hematite iron-oxide—as the hydrolytically stable core of a new type of water-soluble polyometalate complex. Like a molecular macroanion, the new complex is highly resistant to the aggregation processes that lead to the precipitation of colloidal metal oxides. In fact, it can be isolated and re-dissolved repeatedly, each time giving optically transparent solutions, and is stable over a wide range of pH values. At the same time, with a core of 300 Fe atoms, the new catalyst retains the semiconductor properties of hematite, so that it catalyzes water oxidation under visible light with no need for added photosensitizers. More importantly, because the new catalyst is formed from oxidatively-inert polyoxometalate ligands at elevated temperature (220 °C) in water, it is inherently (thermodynamically) stable to the oxidative and hydrolytic processes that limit the active lifetimes of soluble water-oxidation catalysts.

Attesting to the simple logic of this approach, the new catalyst is operated for seven days (one week) with no decrease in activity whatsoever, a longer time under turnover conditions in water than ever documented for a molecular water-oxidation catalyst. As noted in the Conclusions section of our Nature Communications article on this topic, the synthetic methodology is applicable to a wide variety of earth-abundant transition-metals. 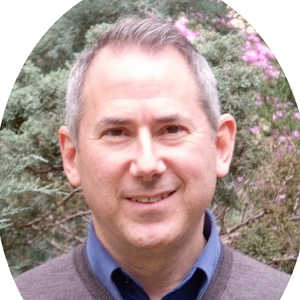 Professor, Ben-Gurion University of the Negev