Our paper in Nature Chemistry can be found here: https://doi.org/10.1038/s41557-018-0165-x
Zhi-Tao He
Professor, Shanghai Institute of Organic Chemistry
Follow
Like Liked by Zhi-Tao He

Typical methods for the enantioselective α-functionalizations of ketones join ketone enolate nucleophiles with carbon or heteroatom electrophiles. We report an umpolung strategy to achieve this transformation with masked ketone electrophiles and a wide range of conventional heteroatom and carbon nuc…

The enantioselective α-functionalization of ketones is a convenient way to construct chiral centers alpha to carbonyl groups, which are prevalent in natural products, biologically active molecules, and synthetic intermediates to these molecules. Typically, this process relies on coupling a nucleophilic enolate with an electrophile. However, reactions with heteroatom-based electrophiles require special reagents in which the heteroatom, which is typically nucleophilic, must be rendered electrophilic by changes to the oxidation state. This modification usually adds one or more additional steps to the synthesis of an α-functionalized ketone. In addition, there is no catalytic system capable of generating α-functionalized ketones containing a diverse array of substituents bound to the alpha position through carbon or a heteroatom with a single catalyst. Thus, a more generalized process using one catalytic system to obtain α-functionalized ketones with a variety of heteroatomic and carbon-based nucleophiles would be synthetically useful.

Our group has a long-standing interest in allylic substitution and has developed its application to include different nucleophiles. We assumed that the utilization of ketone-derived substrates as the electrophile in allylic substitution would make it possible to introduce diverse nucleophiles enantioselectively at the alpha position of the ketone.

With these concepts in mind, we found that TBS-protected enolates undergo allylic substitution smoothly with a variety of nucleophiles, such as primary and secondary amines; alkyl, aryl, and heteroaryl amines; phenoxides; thiolates; malonates and 1,3-diones, as well as natural products, biologically active amino alcohols, amino acids, and even peptides, demonstrating that our method is a viable means to build complex and potentially biologically active molecules. Reactions of these nucleophiles lead to α-substituted ketone derivatives in high yield and enantioselectivity.

Not all the reaction development was straightforward. For the construction of C-S bonds, we initially used sulfinate as a sulfur-based nucleophile and checked the scope. However, the deprotection of TBS in the product led to racemization. The addition of an electron-withdrawing sulfinate group α to the carbonyl increased the acidity of the ketone product, which resulted in rapid keto-enol tautomerization and racemization. Thus, we surveyed more basic sulfur-based coupling partners and found that thiolates were suitable substrates that also produced the desired α-functionalized ketone in high yield and enantioselectivity.

In addition, when it came to deprotecting the TBS enol ether products, the commonly used deprotecting reagent TBAF led to partial racemization of the desired ketone. A series of deprotecting reagents were studied, and we found that the weakly acidic Et3N·3HF removed the TBS group without racemization. Another key point is that the terminal alkene in the product should be transformed first because the migration of double bond to form the conjugated ketone can occur when the TBS group is cleaved.

We are excited to share our new approach to α-functionalization of carbonyl compounds, and we hope that this umpolung strategy will lead chemists to consider its potential applications to other areas. 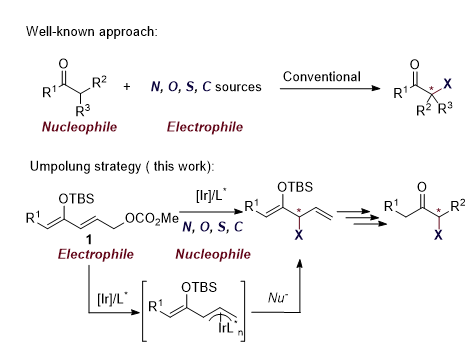