C-alkylpyrogallol[4]arenes (abbreviated as PgCn, where n is the length of the associated alkyl tail), which are vase-shaped macrocyclic host molecules composed of 1,2,3-trihydroxybenzene units, have been determined over the past decade to be versatile building blocks for the construction of supramolecular complexes. Since the initial discovery by Atwood et al. in 2005 of PgCn-based metal-organic nanocapsules (MONCs) constructed from six PgCn units and 24 Cu2+ ions, a number of studies have demonstrated that PgCn canassembled with Mg, Co, Ni, Cu, Zn and Ga ions to form MONCs in different shapes including hexameric octahedral, dimeric spherical and hexameric “rugby ball” shapes. Interestingly, the assemblies of the dimeric spherical and hexameric octahedral MONCs could be controlled by external stimuli including solvents and temperatures. However, PgCn-based MONCs are limited to the aforementioned metal ions, and still have the possibility of synthesizing new PgCn-based nanocapsules and exerting control over their self-assembly behavior.

A search of the CCDC database for metal complexes composed of the o-dihydroxybenzene and 1,2,3-trihydroxybenzene subunit reveals that they can also coordinate with trasition metals such as Ti, V, Mn, Fe and so on, and also lanthanide ions. In these results, we have pay much more attention to cyclotricatechylene (CTC), a macrocyclic molecule composed of o-dihydroxybenzene units, which is much simialr to PgCn molecules. Notably, CTC can assemble with VO2+ centers to form tetrahedral MONCs. Bear this in mind, we have try to use PgCn and VO2+ ions to construct MONCs. Fortunatly, we have obtained a ball-shaped capsule (V24-ball) constructed from 24 vanadium centers and 6 PgC3 units. In attempt to synthesize the dimeric spherical V8 MONC is failed, but its quasi-isomer, hexameric octahedral V24 capsule (V24-oct) is accidentally obtained. Their structural differences are due to the coordination geometry differences in V centers. Speciafically, the V centrers adopt five-coordinated square-pyramidal and six-coordinated octahedral geometries for V24-ball and V24-oct, respectively.

It has been observed that the five-coordinate square pyramidal and six-coordinated octahedral oxidovanadium complexes can interconvert by associating and disassociating an axial molecule. With this in mind, we searched for conditions which promote the interconversion between the contracted V24 octahedron and the expanded V24 ball. Interestingly, we found that the axial water molecules of vanadium centers in V24 octahedron are removed in DMF/CH3OH (1:1, v/v) solution at 80 oC, the DMF working as a dehydrating agent; while those vanadium centers in V24 ball-shaped capsule can capture the water molecules in DMF/CH3CN/H2O/NEt3 (20:80:10:1, v/v/v/v) solution at 80 oC. Following such structural interconversions, the magnetic properties are significantly changed. Specifically, the V4+ centers in V24 ball are antiferromagnetic coupled, while V24 octahedron ferromagnetic at higher temperature.

Overall, our work not only provides a new strategy for efficient construction of metal-organic nanocapsule quasi-isomers by controlling the coordination environments of the metal centers, but also profoundly improves the understanding the transformation process and their structure-property relationships in stimuli-responsive assembly system. 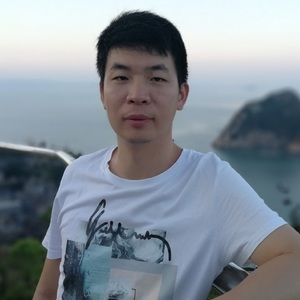 Associated Professor, Fujian Institute of Research on the Structure of Matter, Chinese Academy of Sciences