Domino reactions can offer efficient synthetic access to complex products, but characterisation of unstable intermediates is often not possible. Here the photochemical domino cyclisation of tetrafluorostilbene is characterised by NMR and X-ray crystallography of each intermediate, and shown to termi…

[n]Helicenes are helical polyaromatic compounds formed by n number of ortho-fused aromatic rings. With increasing n number of benzene rings, the second layer appears at n = 7, and the third layer appears at n = 13. In 2015, we reported [16]helicene, whose triple-stacked benzene rings were confirmed by X-ray crystallography (Angew. Chem. Int. Ed. 2015, 54, 6847). Looking at the tightly-compressed structure, we had a straightforward question: what if the stacked benzene ring of [7]helicene becomes electron-deficient by perfluorination? This study was started with our curiosity for the self-stacking structures in helicenes.

We tried to synthesize 1,2,3,4-tetrafluoro[7]helicene (F4-[7]helicene) by photochemical electrocyclization of a stilbene derivative followed by in-situ dehydrogenation with iodine, which is the standard protocol for helicene syntheses. 19F NMR spectroscopy revealed that four fluorine atoms were no longer on the same benzene ring in the product. It was not F4-[7]helicene, but we could not elucidate the structure only by NMR techniques.

The structure was first clarified by X-ray crystallographic analysis. To our surprised, two fluorine atoms were transferred onto the bicyclooctane framework. In other words, the four neighboring fluorine atoms on the same benzene rings before photoirradiation were separated into two fluorine pairs after photoirradiation. It has already been known that [7]helicene can undergo an intramolecular thermal Diels–Alder reaction between the first (terminal) and sixth (second distal) benzene rings. Therefore, at that time, we supposed that F4-[7]helicene would be thermally unstable and thus spontaneously underwent a Diels–Alder reaction followed by an in-situ double fluorine atom transfer reaction.

However, contrary to our presumption, a shorter irradiation time allowed us to isolate F4-[7]helicene and its intramolecular Diels–Alder product from a complicated reaction mixture. They were stable even at more than 100 ºC, meaning that photochemical transformations still proceeded after F4-[7]helicene was generated by photoirradiation. Namely, we performed a photoinduced domino reaction consisting of three photochemical steps. The isolated intermediates were also characterized by X-ray crystallography. As expected, the stacked benzene rings in F4-[7]helicene were more compressed than those in unsubstituted [7]helicene.

A common fallacy for domino reactions probably resulting from the image of a “domino toppling” game is that the key intermediates cannot be isolated and thus are presumed. However, a totally-photochemical domino process can be suspended and restarted at will by controlling the irradiation time. Therefore, the whole process can be thoroughly discussed without presumption, which is one advantage over a thermal domino process that goes through thermally unstable intermediates.

Similar to setting up a line of dominoes without knocking it down, investigating a domino reaction requires a careful and considered approach. In return for this effort, we could discover an unprecedented and unexpected transformation — photoinduced double fluorine atom transfer. 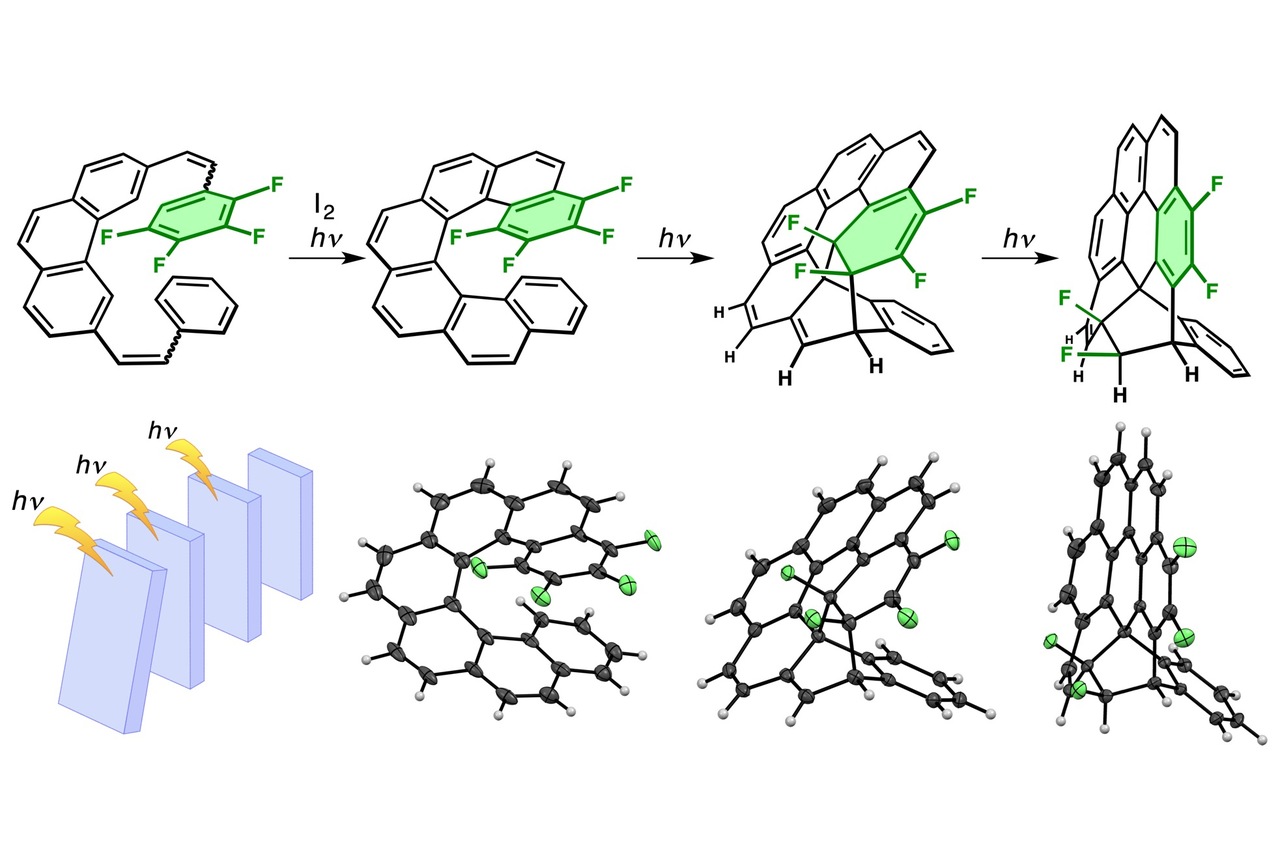