A Trap with DAP

A method for encoding the non-canonical amino acid 2,3-diaminopropionate into proteins allows key acyl intermediates in the biosynthesis of valinomycin to be trapped, providing insight into the oligomerization and cyclization reactions involved.

Often, scientific collaborations start outside the lab. That’s the case for the paper published online today “Trapping biosynthetic acyl-enzyme intermediates with encoded 2,3-diaminopropionic acid”. The two corresponding authors met playing soccer as grad students almost 20 years ago. Our paths crossed on and off since then. In recent years, when our conversation turned to science, we would discuss how replacing the hydroxyl in an active site serine with a nitrogen might be possible using the techniques Jason Chin’s lab is expert in, and would be very useful to apply to the enzymes Martin Schmeing’s (and Chris Boddy’s) labs study: The Chin lab has had great success using orthologous tRNA / tRNA synthetases approach to incorporate non-canonical amino acids into proteins. The Schmeing lab’s favourite proteins, nonribosomal peptide synthetases (NRPSs) have an important final catalytic step where intermediates are transiently bound at an active site serine. Capturing a stabilised version of the acyl-enzyme complex could address open unanswer questions about the NRPS synthetic process. But there was always a problem. The amino acid analogous to serine (or cysteine) but with a side chain nitrogen (2,3 diaminopropanoic acid, DAP), looks very similar to serine and cysteine. The whole process relies on evolving a mutant tRNA synthetase that will use only DAP. No one had been able to generate such a tRNA synthetase.

However, on a visit to the LMB under two years ago, Jason told Martin that his lab had made a breakthrough. Instead of generating a synthetase that would specifically recognize DAP, Nicolas (with Mohan and Duy) generated one that would specifically recognize DAP attached to a bulky light-sensitive protecting group, which was very dissimilar to serine, cysteine and the 18 other canonical amino acids. In this way, we could produce protein with protected DAP incorporated in it, then shine light on the sample to remove the protecting group, revealing DAP at the active site!

We decided to apply it to a very challenging system in NRPS biology, on which Martin and Chris’ labs (through Diego and Graham) had been collaborating. NRPS often finish synthesis of their important bioactive products through the action of a serine hydrolase type thioesterase (TE) domain. A special kind of TE domain, like the one from the NRPS valinomycin synthetase, takes an intermediate, oligomerizes it 3 times and only then cyclizes to release the cyclic dodecapepstide valinomycin. Each stage is a two-step reaction which goes through unstable covalent intermediate-TE complexes. Working side-by-side, Nicolas and Diego made complexes of DAP-TE with the first intermediate, and with the last intermediate, and solved their structures by X-ray crystallography. We could visualize a portion (but not all) of the intermediates. The structures showed that a very mobile part of the TE domain nicknamed “the lid” was in vastly different conformations when an intermediate that should be oligomerized was attached to DAP versus when an intermediate that should be cyclized was attached to DAP. We inferred that variable interaction with the lid allowed the TE to decide whether to oligomerize or cyclize its intermediate, so it performs the right number of oligomerizations and faithfully make its bioactive product valinomycin.

The creation of the system capable of introducing DAP into active sites of proteins, and the demonstration of its utility to capture important enzyme-intermediate complexes opens up many potential uses. Because so many enzymes have transient covalently intermediates, the system could be applied to well over 1% of human proteins, and to many targets for therapeutics. It should help the scientific community visualize these proteins with their substrates, and also be used to capture and analyze substrates for enzymes with unknown function, revealing their biological roles.

Alas, it might not help Jason and Martin’s declining soccer skills. 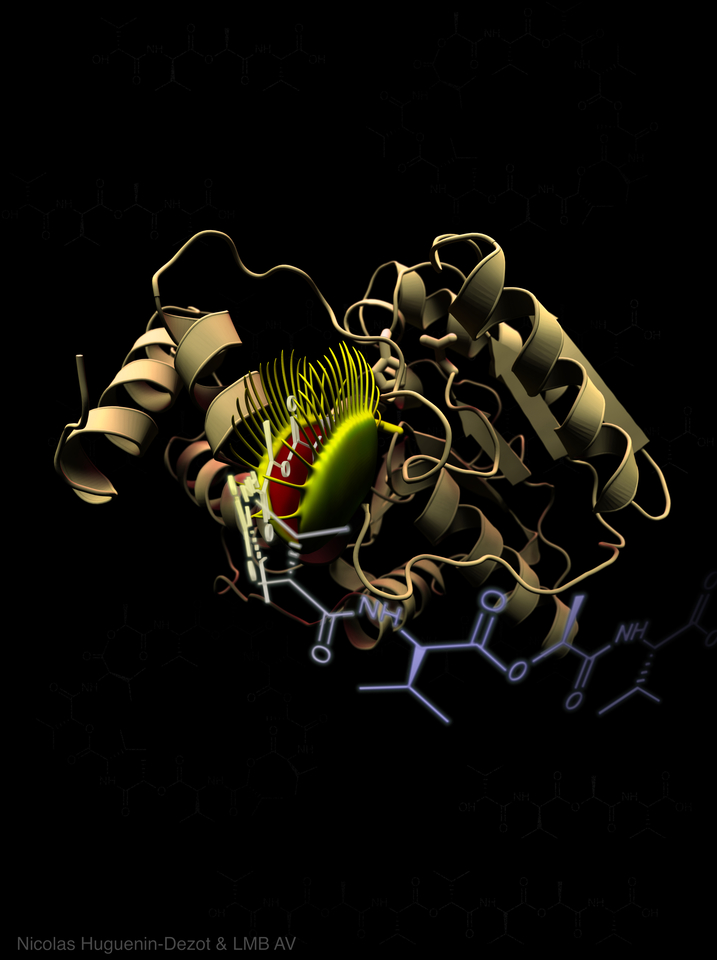 A Trap with DAP