Due to their wide direct band gap tuning from deep ultraviolet (6.2 eV) to far infrared (0.63 eV), advanced electrical, optical and structural properties over other semiconductors, III-nitrides becoming a great choice of various device applications, including LED emitters, lasers, detectors, photovoltaic, high power transistors & electronics etc. Having such a huge applications the full potential of these III-nitrides based devices has not to be resized yet due to several issues related to their growth. Few of them, are i) realization of high quality (In)GaN growth directly on Si, ii) optimization of the In incorporation towards efficient emission in the green spectral range, iii) p-doping in (In)GaN due to high n-type background, iv) realization of epitaxial growth on large area substrates, v) Ohmic contact and Interface sharpness, vi) low-cost fabrication of highly efficient structures by increasing the effective area output. Among the above-mentioned issue, the direct growth of high-quality III-nitrides on Si remains a big challenge. In recent past we have shown by modifying the Si(111)-7x7 reconstructed surface in-situ in the MBE system into Si3N4 using nitrogen plasma, it is possible to grow high-quality InGaN on Si.

Furthermore, due to the worldwide deficit in the demand and supply of fossil fuel, the efficient and stable hydrogen production from water become a major issue for the research and development. Numerous photoelectrode materials starting from TiO2, ZnO, III-As/P, BiVO4, Ta3/C3/Ge3-N4, W/Fe2-O3, Si etc have been reported for the photoelectrodes, however suffering either with the efficiency or stability. Therefore, a search of new material, which not only show the high efficiency but also long stability in aqueous solution find III-nitrides alloys a best suited one due to their band gap tuning across the entire visible spectrum, the straddling band alignment with the O2/H2O and H+/H2 redox potentials, the high absorption coefficient and the high corrosion resistance. Owing to the nitrogen vacancies, defects, the grown InGaN commonly found to be n-type in nature and at surface band bends upward. Further, when coming in contact with water, the conduction and valance band upwards-bending increases, which hinders the conduction band electron to participate in the reduction and suppress H2O reduction reaction.

In this published work in recent Nature Chemistry Communication, we have shown the directly grown InGaN on Si as photoanode, followed by their surface modifications using InN QDs to lower the band bending at the anode-electrolyte interface. The photoanodes were grown by Molecular Beam Epitaxy system and ex-situ probed by FESEM & AFM, XRD, PL and I-V to ascertain their morphological, structural, optical and electrical behaviors. After optimizing, we have selected two photoanodes i) InN(QDs)/In0.25Ga0.75N/Si (named as PA-A) and ii) In0.25Ga0.75N/Si (named as PA-B) for the further PEC performance measurements.

This enhancement we attributed to the followings. The directly measured reduction of the upward energy band bending at the surface in the presence of the QDs is a consequence of the well-established high density of intrinsic, positively charged surface donors of InN due to the surface states located in the conduction band. It is the proof of their existence on the InN QD surface to control the near-surface energy band bending of InGaN. These surface donors actively attract electrons or expel holes to catalyze water oxidation, i.e., the oxygen evolution reaction at photoanode A. The QDs do not participate directly in the PEC reaction. Their bandgap energy is too small, also their absorption is too small due to the small size. The small size, in turn, makes possible the transfer of photogenerated holes directly from the InGaN layer, where the absorption takes place, without energy relaxation into the (quantized) QD energy levels. Energy relaxation of the holes would inhibit the PEC reaction. The QDs purely acts as an electrocatalyst for the oxygen evolution reaction. 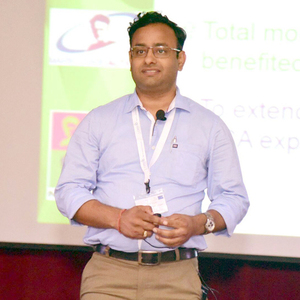