Hydrogen atom transfer (HAT) is one of the most fundamental and ubiquitous chemical processes in chemistry and biology.  In chemical synthesis, HAT plays an important role in many free radical reactions as well as in the reactions involving transition metal hydrides for synthesis of bioactive complex molecules.

Our present research was inspired by Corriu’s pioneering discovery on a wide variety of chemical reactivities of hypercoordinate silicon species.  Among them, the most interesting discovery was that the Lewis base activation of hydrosilanes is capable of both single electron transfer and two-electron reduction chemistry.  Since then, a number of researchers have conducted detailed mechanistic and synthetic studies on chemistry associated with hypercoordinate hydridosilicates.  Despite these efforts, the mechanistic origin of this dual reactivity has remained elusive.

Being aware of the intricacy, the Jeon group considered a hypercoordinate hydridosilicon species as an alternative, more sustainable hydrogen source for HAT, in parallel with substantial recent efforts on the development of sustainable catalysis.  Our hypothesis led us to develop a low-cost, environmentally friendly redox-neutral HAT process involving hydrosilanes and alkali metal Lewis base catalysts; namely, Lewis base-catalysed, complexation-induced HAT (LBCI-HAT). Notably, the LBCI-HAT provides both branch-specific hydrosilylation and polymerization of vinylarenes in a highly selective fashion, depending on the Lewis base catalyst employed.  The outcome of these two processes has merit by virtue of silicon functionality in secondary organosilanes and polymers with silane-end functional groups, which allows further elaboration.

Having established the utility of the catalytic Lewis base-activation strategy, we turned our attention on the mechanism of the redox-neutral olefin hydrosilylation process, particularly on how the hydrogen of pentacoordinate hydridosilicates is transferred to olefin. Our experimental and computational studies suggested that transition metal-free, branch-selective vinylarene hydrosilylation involves LBCI-HAT, as opposed to a net oxidative process via a silyl radical or hydride transfer.  In particular, the complexation of the vinylarene substrate with the alkali metal ion (K+) through the cation-pi interaction was the key for the HAT from a pentacoordinate hydridosilicon species.  In this chemistry, the Lewis base functions not only as a HAT initiator, but also as a silyl radical protecting group.  This allows a highly selective cross-radical coupling.

Finally, we wanted to understand the hydrogen–hydride transfer duality in hypercoordinate hydridosilicon chemistry.  Although the LBCI-HAT mechanism proposed involves formation of a key radical pair intermediate, it can compete with a hydride transfer process.  Theoretical elucidation between two processes required the taking into account of multiple electronic configurations, representing each of the different reaction processes.  In order to characterize this intrinsic multiconfigurational nature governing the reactivity, the multistate density function theory (MSDFT) was employed in collaboration with Gao’s lab at UMN and Nam’s lab at UTA. Indeed, the MSDFT calculation revealed a high HAT, but multiconfigurational character in the transition state of the reaction, accounting for the dual mechanistic nature proposed by other researchers.  The electron paramagnetic resonance (EPR) study, performed in Pierce’s lab at UTA, identified a potassiated paramagnetic species and confirmed our experimental and theoretical predictions.

We anticipate that this study can offer important insights for the finding of more efficient catalytic protocols involving a hypercoordinate silicon species, and can permit to expand the scope of the process for production of new materials and pharmaceutical precursors in a sustainable manner.  If you are interested in our findings and results, you can read our article in Nature Catalysis: 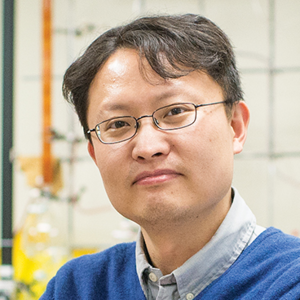 Associate Professor , The University of Texas at Arlington (UTA)