Fluorinated solvents such as hexafluoroisopropanol (HFIP) are often useful in reactions involving radical cations. Here the role of HFIP in photoredox and electrochemical Diels-Alder reactions is explored experimentally and theoretically, and attributed to solvation of anions to reduce their nucleop…

In the recent organic synthetic community, there is a significant emphasis on the chemical reaction via single-electron transfer (SET) process. Radical cation, an opened-shell cationic species generated upon one electron removal from a closed-shell organic molecule, is one major intermediate in those reactions. Although a radical cation intermediate is not a newly appeared chemical species, its reactivity is still not very well understood compared to the other chemical intermediate such as carbocation, carbanion, radical and carbene. Understanding and controlling its reactivity is the ultimate goal of this research.

Our group has been working on the reaction so-called electrochemical hole catalysis.[1] In this system, electrogenerated radical cation works in a catalytic manner to complete redox neutral reactions. Hole catalysis is known in [2+2] cyclization, Diels-Alder reaction, olefin metathesis etc. Other oxidation methods, such as photoredox or chemical oxidation, are also applicable to this system. However, our group has known for a long time that the electrochemical hole catalysis is quite media-dependent in general, and both solvent and supporting salt seems critical.

For example, hole catalytic Diels-Alder reaction (a.k.a. radical cation Diels-Alder reaction) proceeds smoothly under photoredox catalysis [2] or chemical oxidations. However, an electrochemical equivalent reaction in 0.1 M Bu4NTfO/DCM is low-yielding despite the same amount of hole injection compared to chemical oxidation (Figure 1). This result caught our attention, and we started to think a reasonable explanation for this phenomena. "What is the difference between electrochemistry and other oxidation systems?" Well, hindsight is 20/20. It is salt.

Supporting electrolyte is necessary for the electrochemical system. I believe that many people do not pay much attention to it, and we tend to regard it as an inert component. However, especially in hole catalysis, where highly electrophilic radical cations act as a catalyst, the effect of anions can be critical.

Build on this idea, we performed a radical cation Diels-Alder reaction under Ru-catalyzed photoredox condition in the presence of various salts. The result was very clear. Upon the addition of the salts, the efficiency of the reaction decreased. Interestingly, the more donating the anions are, the less efficient the system became. These data suggest that ion-paring between arene radical cation and anions results in the less-productive radical cation.

Next question came up to our mind was "How can we cancel the effect of anions?". This is an important problem for electrosynthetic chemist like us because the use of salts are essential for electrochemistry. In addition, no matter what kind of methods are used for oxidation, anions have to co-exist upon the formation of radical cations. So, addressing this issue seems also valuable for a wide range of the chemical community.

To this end, we finally employed fluoroalcohols, such as 1,1,1,3,3,3-hexafluoroisopropanol (HFIP). Fluorinated alcohols are known to bind anions via hydrogen bonding, while they do not preferentially interact with cations [3]. Also, they are tolerant of oxidative conditions. Thus fluorinated alcohols seems an ideal choice of additive for hole catalysis. In fact, the addition of HFIP to the above mentioned photoredox system significantly improved the reaction efficiency.

This work conclusively demonstrates that anions can be critical for the hole catalysis, and fluorinated alcohols are beneficial by trapping the anions. We believe that these new insights into the character of radical cations could be of some help to harness them in organic reactions.

For more detail of this work, please check out our article “Interplay of Arene Radical Cations with Anions and Fluorinated Alcohols” in Communications Chemistry. 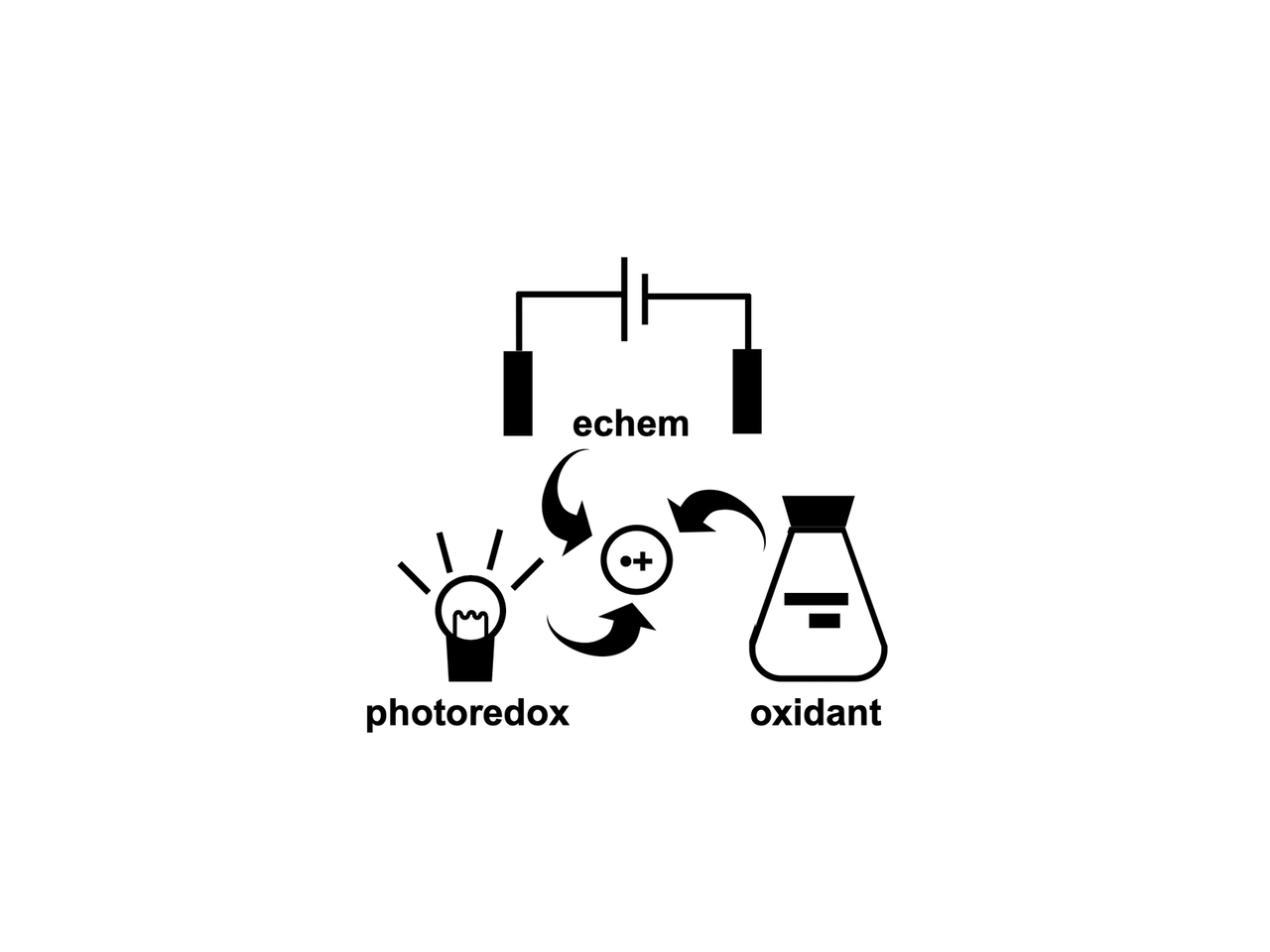