Despite the extensive efforts to stabilize Au catalysts for industrial hydrochlorination of acetylene to vinyl chloride the deactivation is not overcome yet. Here, the authors demonstrate that the ceria promotion to Au catalysts affords enhanced activity and stability via formation of Au(0)/Au(I) as…

Replacement of Hg with non-toxic Au based catalysts for industrial hydrochlorination of acetylene to vinyl chloride is urgently required. However Au catalysts suffer from progressive deactivation caused by auto-reduction of Au(I) and Au(III) active sites and irreversible aggregation of Au(0) inactive sites. Here we show the inclusion of cerium oxide as support to Au catalysts, which gives enhanced activity and stability due to the strong mediating properties of Ce(IV)/Ce(III) with one electron complementary redox coupling reactions.

The use of active single metal atoms dispersed on support surface in catalysis is currently a hot research topic. However, their stability against aggregation or leaching under practical dynamic conditions during catalysis is of a major concern. Particularly, Au atoms have demonstrated superior activity for many diverse reactions, but their stability remains to be solved. So far there is not yet any practical high throughput catalytic application for Au atoms.

We have chosen to investigate the direct catalytic hydrochlorination of acetylene by supported Au atoms and address their stability and aggregation issues on cerium oxide as this support surface can be associated with facile redox properties of Ce(IV)/Ce(III).

Direct catalytic acetylene hydrochlorination is a crucial industrial process for coal-rich places to produce vinyl chloride monomer (VCM). As an important material for plastics, the demand for VCM continues to increase markedly. Mercuric containing catalysts have been used as the main commercial catalysts for the production of VCM for more than 60 years. Due to the high toxicity of mercuric chloride, mercury associated pollution problems have emerged gradually from and around the industrial sites. For most countries, the use of mercury was prohibited in VCM plants after 2017, while the already existing reactors are advised to be reduced by 50% by 2020 against 2010, and to achieve mercury-free when the new process become technically and economically feasible. Given the short timescale, it is imminently required to develop a practical efficient non-mercury based catalyst for acetylene hydrochlorination. Dispersed Au atoms on a solid surface are a good candidate for the first practical alternative catalyst for large scale use, since the reaction conditions are mild for Au and also present comparable catalytic properties to Hg.

As early as 1985, supported Au was demonstrated to be active for this reaction. However, there is on-stream deactivation of such Au catalysts, combined with the expense of significant Au loading that preclude their practical use. The main reason for deactivation of the Au catalyst is thought to be the over-reduction of active Au(III)/Au(I) species to inactive Au(0) due to thermodynamically favored auto-reduction and/or in-excess reductants (reductive impurities). As long as Au(0) is formed, the catalyst will suffer from non-returnable and aggregation of Au atoms into large clusters or nanoparticles on surface leading to deactivation.

In this work, we have studied the activity and stability of Au atoms with CeO2 inclusion as compared to other support oxides for acetylene hydrochorination. Au/CeO2 based catalysts are indeed found to display the highest activity. On-stream laboratory testing has demonstrated > 3000 hours (125 days) stability, whereas Au atoms without CeO2 has progressively deactivated within the first 500 hours. In addition, highly active catalysts with Au contents as low as 0.1 wt% are demonstrated. Excitingly, in-situ X-ray absorption (XAS) and density functional theory (DFT) calculations revealed that the kinetically more labile redox Au(0)/Au(I) pair are catalytically more active in the presence of CeO2 as a mediator; with the CeO2 facilitating Au(0)/Au(I) dispersion, regeneration and preventing Au(0) aggregation. Total pre-reduction of Au species to Au nanoparticles when placed in C2H2/HCl stream can also rapidly self-rejuvenate the deactivated catalyst under the reaction conditions. It is believed that this study may offer new insights for the commercialization of Au based catalysts for industrial important reactions.

More detail in the paper. 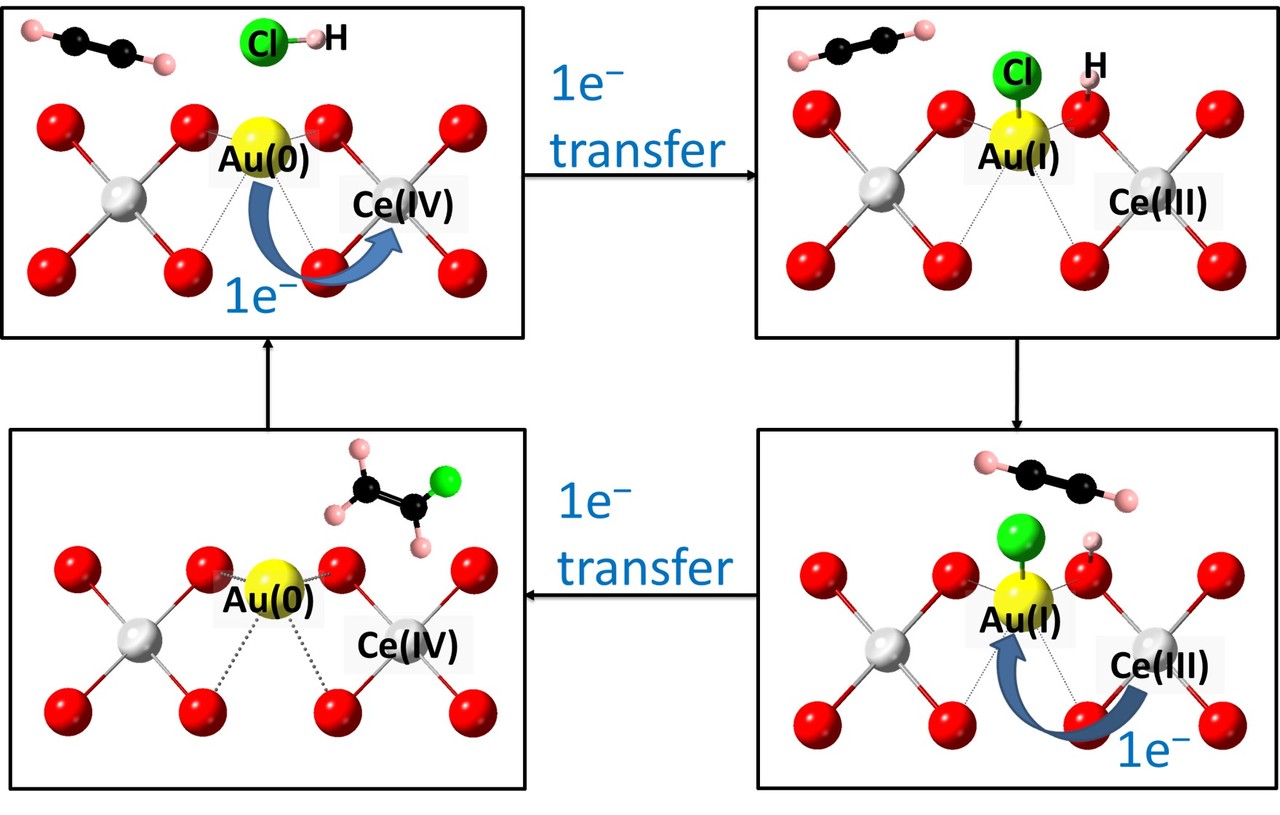