Human body is full of electrical signals for myriad functions in our daily lives ranging from our bodily motions to higher intelligence. Ever since the first discovery of bioelectricity by Luigi Galvani more than two centuries ago, the intricate and intriguing bioelectronic nature of our body has fascinated numerous researchers – not surprisingly, us as well. As a research group working on soft materials especially hydrogels, we have explored how hydrogels can serve as a better bridging interface between the human body and synthetic electronic systems. Among many engineering materials, hydrogels – polymer networks infiltrated with large amount of water – show a great promise as ideal interfacing materialsto biological tissues owing to their unique tissue-like mechanical properties, water-rich nature, biocompatibility, and flexibility and versatility in engineering. As an early attempt, we proposed the concept of stretchable hydrogel electronics and devices (Advanced Materials 28, 4497-4505, 2016), but with a lot of room for further development and exploration.

To better understand the challenge, we first studied possible reasons for poor electrical conductivity in existing PEDOT:PSS hydrogels. Interestingly, we found that the majority of PEDOT:PSS hydrogels have been prepared by mixing or polymerizing PEDOT:PSS into a non-conductive hydrogel template, forming an inter-penetrating network (IPN) hydrogel. This fact leadsus to hypothesize that removing the non-conductive template to yield pure PEDOT:PSS hydrogels might significantly improve the electrical conductivity. However, like every experiment in research projects, experimentally realizing this hypothesis was not trivial. Pristine PEDOT:PSS couldn’t form stable hydrogel in wet environments and was easy to dissolve away (Fig. 1). The use of various additives encountered a complicated problem of removing the additives to achieve pure PEDOT:PSS without affecting integrity and properties of PEDOT:PSS hydrogels. After many unsuccessful trials, we found that this simple yet enticing concept of pure PEDOT:PSS hydrogel was actually quite hard to realize.

A solution came rather unexpectedly. At that moment, we were working on other projects on semi-crystalline hydrogels based on dry-annealing of aqueous polymer solutions to prepare mechanically robust hydrogels. Inspired by the dry-annealing process in these projects, we tried a very simple experiment – drying and then annealing PEDOT:PSS solution with a volatile additive dimethyl sulfoxide (DMSO) at an elevated temperature until all additives evaporate away (Fig. 2). To our surprise, we could get dried films that swelled into stable soft hydrogels in water without remaining additive (by FTIR measurements). A bigger surprise came when we measured the electrical conductivity of these hydrogels – the electrical conductivity could reach 40 S/cm in water and 20 S/cm in PBS, orders of magnitude higher than that of existing PEDOT:PSS hydrogels! After the moment of surprise, we realized with excitement that we found a way to materialize our hypothesis and achieved pure PEDOT:PSS hydrogels with superior electrical conductivity.

Our work introduces several new findings. The simple yet effective method can achieve pure PEDOT:PSS hydrogels without any other compositions. The resultant pure PEDOT:PSS hydrogels achieve electrical conductivity over 40 S/cm in water and 20 S/cm in PBS, which are among the highest values reported for conducting polymer hydrogels, with superior mechanical and electrochemical properties and stability in wet physiological environments. While we are truly excited about our new pure PEDOT:PSS hydrogels and their extraordinary properties, there are still remaining tasks to be done including better integration to other device materials (e.g., substrates, electrodes, etc), compatibility to advanced micro-fabrication approaches, and validation of in vivo biocompatibility and bioelectronic performance, for which we are actively working on to address in our upcoming studies.

We hope that our pure PEDOT:PSS hydrogels can fill the technological void in conducting polymer hydrogels, and therefore, provide a useful material platform for next-generation bioelectronic devices and applications.

For more details, check out our paper “Pure PEDOT:PSS Hydrogels” on Nature Communications.

This article is contributed by

Multimodal Switching of a Redox-active Macrocycle 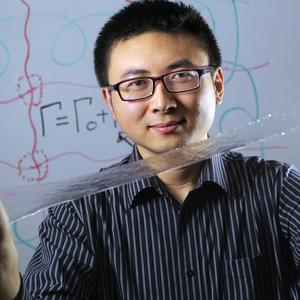