I’ve had a rather busy summer, and apologize for not posting earlier about last month’s ‘in your element’ piece. Our before-latest article sees Barbara Finlayson-Pitts from the University of California, Irvine take a look at chlorine. I’m happy to say that this element, which chemists and non-chemists alike are well acquainted with, completes our first family of the periodic table! 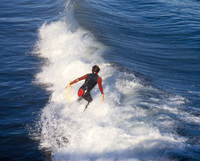 The first report of chlorine has some fantastic and charming old chemical language in it (I think I may have already mentioned my penchant for archaic terms): Carl Wilhelm Scheele noticed that reacting “brunsten” with “muriatic acid” led to a yellowish green gas — check in the article just what those reactants were. At the time, the gas was referred to as “oxymuriatic acid”, a compound of oxygen and muriatic acid. It was Sir Humphry Davy that later identified it as a new element, and named it chlorine after its colour.

Element 17 is abundant, and has found many applications, for better (such as for bleaching and disinfecting water) or for worse (for example, chlorinated compounds have been used as chemical weapons). One aspect discussed in the article, which must not be neglected, is its atmospheric chemistry. The chlorofluorocarbons (CFCs) of aerosols and refrigerants have been linked to much damage in the atmosphere. Other sources of element 17 that contribute to its atmospheric chemistry are increasingly being identified. NaCl particles from seas and oceans, and dust from alkaline dry lakes, also contains chlorine that goes on to react with gases in the atmosphere; surprisingly, chlorine chemistry is also observed in continental regions.

In any case, don’t let the fact that “these atmospheric processes are incredibly intricate and difficult to study” stop you, Barbara Finlayson-Pitts emphasizes that “elucidating their chemistry is critical to quantitative predictions of processes, and in turn reducing or overcoming undesirable effects.”