This month’s ‘in your element’ article (subscription req’d), written by Katharina Fromm from the University of Fribourg, is about barium — an element infamous among those who have ingested it as a ‘barium meal’ for an X-ray of the stomach and bowels. 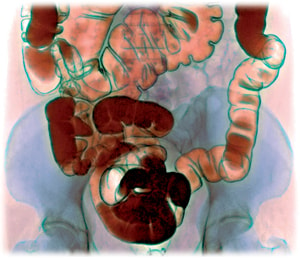 It is barium sulfate that serves as a contrast agent for these scans, despite its toxicity. The barium ions of various salts can interfere with the calcium- and potassium-based processes in the body, leading to problems ranging from muscle weakness to breathing difficulties, cardiac irregularities and even paralysis. This is why barium carbonate is an efficient rat poison. But — because there is a “but”, otherwise it wouldn’t serve as contrast agent in those gastrointestinal studies mentioned above — the reason why barium sulfate can be ingested safely is that it is insoluble in aqueous media. Phew. Never underestimate solubility effects!

I’ll let you read the article to find out how a barium-containing stone intrigued witches and alchemists from the early 17th century, with such a peculiar behaviour that one scientist, Giulio Cesare Lagalla, remained sceptical even after seeing one such stone. It is somewhat surprising that the origin of the phenomenon was only unambiguously elucidated last year (until then it was mistakenly attributed to another one of the stone’s components).

Barium compounds are also used in many other fields, for example as weighting agents to make drilling fluids — used in oil and gas wells — denser. This fits with the particular characteristic element 56 was named after: barys means ‘heavy’ in Greek. It has however a somewhat more artistic side: barium chloride and nitrite salts are used to colour fireworks bright green, and barium dihydroxide is used in the restoration of artworks. While we’re on the topic of barium hydroxide, I can share one regret with you: as a kid, I’d have loved to do this endothermic reaction with an ammonium salt. Mix two powders, get a liquid and a smelly gas and, as a bonus, any water placed underneath your beaker freezes. Pretty cool (ahem).