The allure of aluminium


In the first issue of the year, Daniel Rabinovich from the University of North Carolina at Charlotte shares with us anecdotes about an element we use on a daily basis (subscription required). But just because aluminium serves to package food and drinks, we shouldn’t overlook its grander history and rich chemistry.

Aluminium hasn’t always been such a common-or-garden element: it used to be pricier than gold, it is aluminium cutlery that Napoleon III reached for to impress guests, and I’ll leave you to check Rabinovich’s ‘in your element’ article to read Jules Verne’s praise of element 13. 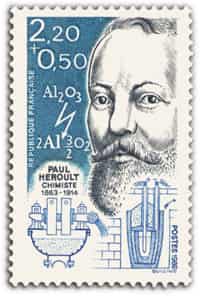 Alum, a hydrated sulfate salt of potassium and aluminium [KAl(SO4)2·12H2O], has long been known — ancient Greeks and Romans used it as astringent for dressing wounds. But although aluminium is present in various compounds, and abundant on Earth, it is so reactive in its elemental form that it wasn’t isolated until the 1820s.

Friedrich Wöhler isolated aluminium metal in 1827, Henri Sainte-Claire Deville produced larger quantities and published a detailed account of its properties and applications in the 1850s, and both Charles Hall and Paul Héroult devised electrolysis-based large-scale fabrication processes in the 1880s. Add to this the contribution of Karl Josef Bayer, who developed a route to extract and purify alumina from the mineral bauxite et voilà, aluminium became so widely used it was to be referred to as ‘the magic metal’ by National Geographic.

Its salts, compounds and coordination complexes have also proven useful for a variety of reactions, some of which have recognizable names such as the Friedel–Crafts acylation and alkylation reactions, or the Ziegler–Natta polymerization of olefins. Beyond its interesting chemistry and a myriad of practical applications, the unassuming metal also inspired artists — I particularly like the “Molecule Man”: 30m-tall structures by Jonathan Borofsky.