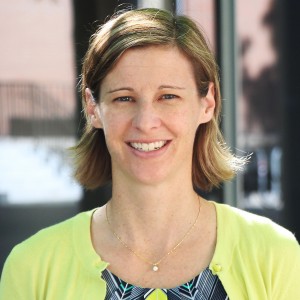 Jen Heemstra is in the Department of Chemistry and the Center for Cell and Genome Science at University of Utah, and works on understanding and utilizing the molecular recognition and self-assembly capabilities of nucleic acids for applications in biosensing, bioimaging, and stimuli-responsive materials.

I had fantastic mentors. I entered high school thinking that I wanted a career in math. This changed when I joined Science Olympiad, largely because our coach was so effective in conveying to us the joy of scientific discovery and the fact that science is a constantly evolving field. In college, I had the opportunity to work in a chemistry research lab with an outstanding mentor, and after two years thought “hmmm, maybe this is something I want to do with my life.” This was followed by outstanding mentors in graduate school and my postdoc, who nudged me toward academia. I now recognize that l love chemistry because I love to design, build, and explore molecules. But, I think there are many careers that I could have been happy in, and it is interesting to ponder whether things might have ended up differently given a different set of formative influencers in my life.

I would love to be an architect. Over the past three years, I’ve had the opportunity to serve on the design committee for a new building on our campus, and that has been a really neat experience. I’ve come to appreciate much more of what architects do. Similar to chemists, they have some mundane aspects to their jobs, but they spend significant amounts of time creating, problem solving, and engaging with other people, which are all things that I love about my current job.

Our lab has spent the past seven years developing and studying biomolecular platforms for molecular recognition, self-assembly, and catalysis in vitro. We’re excited to now be pushing these towards applications in living cells, and eventually in vivo. We anticipate that this will open up new avenues in a variety of areas including metabolite imaging, biocatalyst discovery, RNA-based diagnostics, drug delivery, toxin sequestration, and transcript-targeted therapeutics. Over the past few years, I’ve also become increasingly passionate about the challenge of how to educate and prepare students for future success. In particular, I think that we need to help students overcome fear of failure, and encourage them to embrace failure as a necessary step on the path to innovation. My grand hope is that this will lead to an overhaul of how universities assess student success in courses – our current approach teaches students to avoid failure at all costs, which is in dissonance with the values of today’s most innovative workplaces, where we hope our students will end up.

Rock climbing has been a passion of mine for the last 20+ years, and so I would choose to have dinner with Lynn Hill. She was one of the few women hanging out in Yosemite’s Camp 4 during the dawn of sport climbing in the 1980s, and has crushed barriers across multiple disciplines of climbing. Right at the time that I was starting to climb, she became the first person, male or female, to free climb The Nose on El Capitan. A year later, she repeated the climb in under 24 hours. When I first subscribed to Rock and Ice magazine, the free gift was a poster of Lynn Hill climbing The Nose – this hung in my dorm room all through college as an inspiration to work hard and push limits.

These days, I’m only in lab to do experiments related to our educational or outreach activities. My last experiment was flooding a plate of GFP-expressing c. elegans and trying to pipet them into a 384-well plate to measure fluorescence intensity. My experiment didn’t work, but then two graduate students from my group tried the same experiment a week later, and they got it to work great. That’s pretty typical these days, and I’m thrilled to be surrounded by a group of people who are all much more competent in lab than I am.

Album choice is easy – The Heist by Macklemore & Ryan Lewis. They are one of many artists whose music I enjoy, but what makes them unique is the diversity of emotions that are captured on one album. This album in particular has songs that span the themes of working hard to achieve big goals (“Can’t Hold Us”), the shame that comes with failing yourself and those you care about (“Starting Over”), and not taking yourself too seriously (“Thrift Shop”). I would need a lot of positive energy to survive in exile, and it’s impossible not to smile when singing along to lyrics about rocking flannel zebra jammies from a thrift store. Book choice is much tougher. Most of my favorite books right now (Mindset, Creativity Inc., Give and Take) are focused on how we relate to those around us, so reading one of those on a desert island would make me feel even more lonely. I would probably choose Bossypants by Tina Fey, as that book can still make me laugh out loud, even though I’ve read it at least five times.

I would love to see an interview with Cathy Drennan. She is an outstanding researcher, educator, mentor, and advocate for diversity, manages to balance all of this with family life, and seems to be having a blast in everything she does.