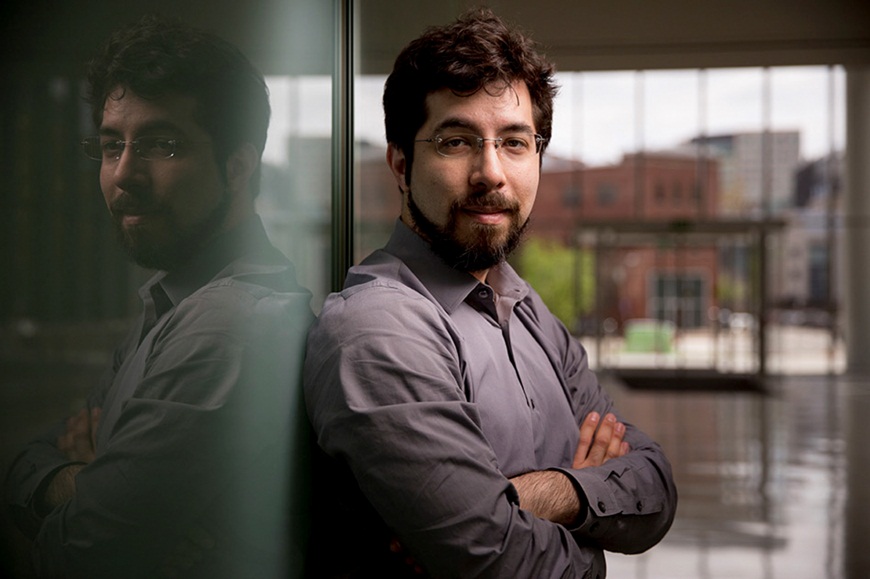 Ed Boyden is in the MIT Media Lab and McGovern Institute, and a professor in the Departments of Biological Engineering and Brain and Cognitive Sciences, where he directs a group that develops and applies new molecular and optical tools to neural circuit analysis. Ed recently published a paper entitled “Engineering genetic circuit interactions within and between synthetic minimal cells” in Nature Chemistry.

Even as a kid, I was very philosophical — wondering what was the meaning of life, and what it meant to be human, and what was the nature of consciousness. At age 14, I entered a program at the University of North Texas that let students directly begin college instead of finishing high school. I joined Prof. Paul Braterman’s chemistry lab as a research assistant, working on a project to create the building blocks of life from scratch. I worked on a project where we tried to insert ferrocyanide into layered double hydroxides, and then to drive reactions that would convert ferrocyanide into nucleic acids like adenine. Immediately this struck me as amazing — a philosophically interesting experiment, which was at its heart a chemical project, and chemistry would give you the tools to confront it.

After two years at the University of North Texas, I transferred to MIT, where I completed degrees in electrical engineering and computer science, and physics. At that point I felt like I completed my “skill” training, and then decided it was time to pick some hard problems work on, and that was the point where I switched into neuroscience, entering the Stanford neuroscience PhD program where I worked in the labs of Richard Tsien and Jennifer Raymond on learning and memory (and, in parallel, co-launched optogenetics with Karl Deisseroth, as a side project done in parallel to my PhD). So I would have to say that I’m not only a chemist, although the focus of my group is largely on molecular strategies for understanding biological complexity. I would have to say that I think backwards from problems, try to survey every possible angle of attack on them (whether chemical, physical, electrical, or computational), and then take the best approach. Much of the time, that does mean a molecular tool, but we also do work in robotics, optics, and computational modeling. So I would have to say I’d want to continue to be a problem solver, tackling problems with whatever discipline is the best one for the job. If I had to leave science entirely, though, I’d probably want to write novels or movie screenplays — I like to write.

Right now, we are working on a way to image biological specimens, like cells and tissues, in 3D with nanoscale resolution. We achieve that by synthesizing a polyelectrolyte gel evenly throughout a preserved specimen, anchoring key biomolecules or labels to the specimen, and then adding water so the polyelectrolyte gel swells and takes the biomolecules along for the ride. The net effect is like drawing a picture on a balloon and then blowing up the balloon — except in 3-D. We call the technology expansion microscopy. The idea of embedding a preserved tissue in a hydrogel is an old one, dating perhaps back to 19951. In 2015 we showed the basic concept of expansion microscopy2. Then in 2016 we revealed powerful and easy protocols for analyzing proteins3  and nucleic acids4. The net impact is that people can map the identity and locations of biomolecules through complex systems like brain circuits, cancer biopsies, and so forth — helping reveal how molecules are configured to implement biological processes, and how they go wrong in disease states. I hope that a wealth of biological insight, as well as better disease targets, will emerge.

Hmm… probably Archimedes. First, we just don’t know much about him, at least not compared to modern scientists — much about him remains cloaked in myth or legend. Second, he anticipated quite a bit of mathematics and physics that followed him, and was in some ways far ahead of his time. And developed many practical inventions. It would be great to find out what his influences were, and how he thought about his culture and time.

For the first few years I was a professor at MIT, I often would teach students how to do experiments — preparing cells with optogenetic tools expressed, performing patch clamp electrophysiology, aligning optics — and then do experiments side-by-side with them. The last set of experiments I did from start to finish, that resulted in a paper, were the optogenetics experiments for the 2005 paper that kicked off the modern excitement about controlling neurons with light5.

I suppose How to Survive on a Deserted Island wouldn’t really count? (Apparently it is a real book, and has at least some good reviews.) So I suppose it should be a really long book, and a really long album. (As opposed to a life-changing book or album that might have such impact, that reading it or hearing it too often becomes unnecessary or even tiresome.) So maybe for the book, I’d pick the Encyclopedia Brittanica (if you can still buy that). For an album — I never seem to tire of Chopin’s piano works, so maybe a collection of those.

A living chemist, or any chemist ever? If the latter, it could be interesting to interview Lavoisier as it seems like he had an interesting life. (Lots of chemists did, it seems.) If living, there are so many great folks who could be fun to interview, but if I just had to pick one, how about Ferran Adrià, a chef who is one of the pioneers of bringing chemistry-driven techniques into modern cooking?