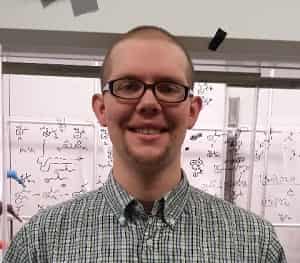 Michael Young is in the Department of Chemistry & Biochemistry at the University of Toledo and works in the areas of supramolecular and organometallic chemistry.

I love the idea of creating new things, and when I discovered synthetic chemistry I couldn’t help but turn my love of doodling ideas into drawing (and later developing) new molecules.

I’d probably be a composer or a chef. Basically something where I can create new things that improve the lives of others.

My group is currently working on new strategies to use supramolecular principles for improving regioselectivity and activity in organometallic chemistry. The hope is that this will provide exciting opportunities for synthetic chemists to access new synthetic space, and maybe even develop some functional therapeutics.

Alexander Borodin. His ability to be both a successful chemist and musician has always been inspirational to me.

Earlier today I set up an iron-catalyzed reduction of an aromatic amine. Prior to that I had run a Rosenmund von Braun reaction, as well as an amine C–H functionalization reaction that we’re currently developing.

I would take Brave New World by Aldous Huxley to read, and Get Acoustic by The Megas to listen to.

Stephen Buchwald — everyone I know who has met him describes him as one of the most amicable chemists they’ve ever met, and his chemistry is intellectually stimulating. Also, I’d like to see what new comments he has about his cats, although that might require an eighth question.