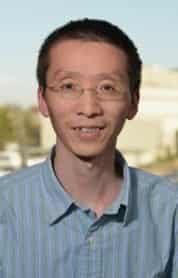 I was amazed by the “magic” results from arranging different elements when I was a middle school student. Later, I was attracted by the art of synthetic chemistry and the applications in pharmaceuticals.

If I weren’t a chemist, I would want to be a pilot since I enjoy the feeling of flying “freely” in the sky. However, I have never had this experience, and thus it might not be realistic.

We are working on the site-selective C–H functionalization of simple substrates such as aliphatic amines and aldehydes via transition metal catalysis. I hope that it will lead to the practical use of these methods in process chemistry.

4. Which historic figure would you most like to have dinner with — and why?

Mozi, an ancient Chinese philosopher and the founder of the school of Mohism. More impressively, he was also a great scientist with prominent knowledge in geometry, physics, optics, etc.

I was running a Suzuki-Miyaura coupling reaction together with a new graduate student about two weeks ago if that counts.

Vy Dong because she is such a creative chemist.