All in the name of science…


When word reached us here at Nature Towers that just a mile or two away there was a shop making ice-cream using liquid nitrogen, we looked one another in the eye and decided that, for the good of Science, we should go and test it out. 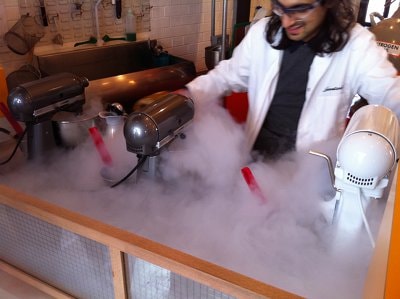 We discovered that Chin Chin Laboratorists, “Europe’s first nitro ice-cream parlour”, contained so much lab equipment that we couldn’t help smiling. From the massive wheeled dewar of nitrogen in the corner to the beakers and conical flasks of sauce and toppings, we kept spotting things more familiar from the lab than the kitchen. My personal favourite was the huge frame all through the shop, like a (much) bigger version of the one I’d once built to put a vac-line on. In a very nice touch, the menu was on a clipboard clamped to the frame.

We enjoyed the visit – and the ice-cream – so much that we thought we should interview Ahrash & Nyisha, the guys behind Chin Chin. Here’s what they had to say:

What gave you the idea to have an ice cream shop using liquid cryogens?

We were initially going to open a really fancy dessert bar, but when we researched different methods of making ice cream we realised that there were no ice cream parlours that solely used liquid cryogens and the only place you could experience this was at the very best restaurants in the world. We decided to scrap the dessert bar idea and try and revolutionise what an ice cream parlour should be

Why do you make ice cream using liquid nitrogen?

The science behind it is that the quicker you freeze ice cream the smaller the ice crystals and the smoother the texture; there are also other major advantages such as an ultrasmooth texture that requires less milkfat (and thus fewer calories) and we have complete freedom to make any texture and flavour we want so vodka or space dust ice cream are possible. Ice cream is really all about texture and ours is the best.

What scientific backgrounds do you have?

Very little – our backgrounds are law and marketing, but we have a love of science and food and an obsessive compulsion to never miss BBC’s Horizon

How does a liquid-nitrogen ice cream recipe differ from a normal one?

Ahh that took us a few months to get right – more milk, less double cream, one-third less sugar and there are three secret ingredients that we use

How do people normally react when they see all the lab gear and nitrogen?

How much nitrogen do you get through?

Far too much: in summer we will go through up to 1000 litres of liquid nitrogen per week

Are people ever worried about the ice-cream/freezing themselves?

When I put my googles on people put their sunglasses on, some take a step back – we always assure any concerned customers that they won’t get frostbite and use a laser thermometer to illustrate the point. But someone once said that they enjoyed the ice cream very much but had to eat it carefully as they did not want to bite into a pocket of liquid nitrogen… we just smiled!

Have you had any other groups of PhD chemists coming in and getting hugely over-excited?

We have a group of science teachers who sometimes come in regularly for ‘Friday Night Licks’, lots of people that work in labs, young children that want to be scientists, liquid nitrogen handlers… We are completely ‘geek chic’

Do you any problems with health and safety inspectors?

Even the sternest of health inspectors cannot help but smile as the vapours flood across the counter! Nitrogen is used at McDonald’s around the country as part of their carbonation system for their soft drinks, and it is not classed as a hazardous substance. Having said that, it was a nightmare trying to get a supplier; it is always much harder being the first!

You say you are the first shop in Europe that offers this – does that mean there are other shops around the world that we can visit to try this?

The shop is a complete one of a kind and we know we are the first in Europe but are unsure about the rest of the world, the technique of using liquid nitrogen actually dates from the early 20th century but this is the first commercial venture that solely uses this technique to produce ice cream.